The following “media guidance” paper from the Chicago Police Department was obtained and published by the Illinois News Broadcasters Association.  The paper states that a number of routine activities for credentialed journalists, such as passing behind police lines, will not be allowed.  The paper also includes a number of ominous warnings about not getting arrested and how no special rights will be afforded journalists if they are arrested. 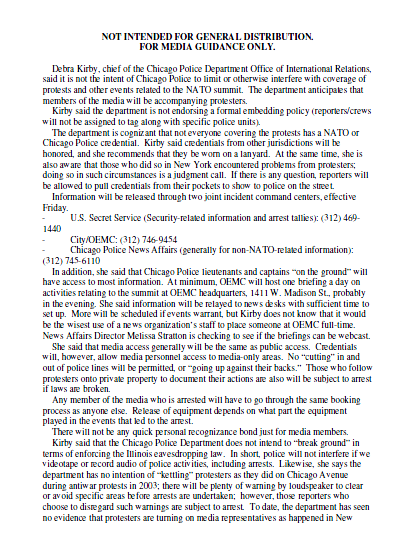 NOT INTENDED FOR GENERAL DISTRIBUTION.
FOR MEDIA GUIDANCE ONLY.

Debra Kirby, chief of the Chicago Police Department Office of International Relations, said it is not the intent of Chicago Police to limit or otherwise interfere with coverage of protests and other events related to the NATO summit. The department anticipates that members of the media will be accompanying protesters.

Kirby said the department is not endorsing a formal embedding policy (reporters/crews will not be assigned to tag along with specific police units).

The department is cognizant that not everyone covering the protests has a NATO or Chicago Police credential. Kirby said credentials from other jurisdictions will be honored, and she recommends that they be worn on a lanyard. At the same time, she is also aware that those who did so in New York encountered problems from protesters; doing so in such circumstances is a judgment call. If there is any question, reporters will be allowed to pull credentials from their pockets to show to police on the street. Information will be released through two joint incident command centers, effective Friday.

In addition, she said that Chicago Police lieutenants and captains “on the ground” will have access to most information. At minimum, OEMC will host one briefing a day on activities relating to the summit at OEMC headquarters, 1411 W. Madison St., probably in the evening. She said information will be relayed to news desks with sufficient time to set up. More will be scheduled if events warrant, but Kirby does not know that it would be the wisest use of a news organization’s staff to place someone at OEMC full-time. News Affairs Director Melissa Stratton is checking to see if the briefings can be webcast. She said that media access generally will be the same as public access. Credentials will, however, allow media personnel access to media-only areas. No “cutting” in and out of police lines will be permitted, or “going up against their backs.” Those who follow protesters onto private property to document their actions are also will be subject to arrest if laws are broken.

Any member of the media who is arrested will have to go through the same booking process as anyone else. Release of equipment depends on what part the equipment played in the events that led to the arrest.

There will not be any quick personal recognizance bond just for media members. Kirby said that the Chicago Police Department does not intend to “break ground” in terms of enforcing the Illinois eavesdropping law. In short, police will not interfere if we videotape or record audio of police activities, including arrests. Likewise, she says the department has no intention of “kettling” protesters as they did on Chicago Avenue during antiwar protests in 2003; there will be plenty of warning by loudspeaker to clear or avoid specific areas before arrests are undertaken; however, those reporters who choose to disregard such warnings are subject to arrest. To date, the department has seen no evidence that protesters are turning on media representatives as happened in New York. She urges media to keep safety in mind and to “not become the story.”

If there is a problem, Office of News Affairs Director Melissa Stratton can be reached through Chicago Police News Affairs.

Chicago Police command will be broken down by sector, and the department has made efforts to provide media parking for large planned events. These parking zones are effective from 8 p.m. Friday until 6 p.m. Monday. They include:

Petrillo/Grant Park/Art Institute events:
– Columbus Drive: Both curbs from Jackson to Monroe, but not blocking the entrance to the Art Institute.

The National Nurses’ Union has control of the parking area for the Friday rally and concert. On Sunday, the CANG8 protest group will set up the media bullpen. In addition, police say they will attempt to set up media parking and bullpen locations along march routes as they determine what is happening.

The Sunday march steps off at 2 p.m. and is anticipated to take two hours and 15 minutes to cover the 2.64 miles. On Sunday, no risers will be provided at Cermak/Michigan in the bullpen area for the concluding ceremonies of the big march. Cameras will have to shoot over one another. Space is constrained at the end of the march for the general public. Parking Sunday will be at Cermak/State and dispersal of the crowd will be to the west. Kirby does NOT recommend that reporters who march along the parade route try to get into the media bullpen at the end of the march; she said it will be possible, but it will not be easy to do so.

If a suspicious package is found or an area is cordoned off because of a potential bomb, the area cleared will depend on the threat that is posed. Media will be allowed as close as possible, but that is an event-by-event call.

Reporters who carry backpacks should be prepared to show their content to police. You may be asked to fire up and demonstrate any equipment that does not look familiar to officers.

Those who have negotiated parking on private property should inform CPD News Affairs if they have not already done so. Police may check to make certain that vehicles are parked on private property with consent of the owner. Unmarked vehicles should have Chicago Police news media vehicle identification cards displayed at all times. It is the intent of Chicago Police to provide close access, with direct vision and contact with those entering and leaving events/marches/rallies. But police emphasized that those who choose to walk amid the protesters are “on your own.” The department cannot guarantee the safety of those who do so and cannot guaranteed that they can extract any reporter who ends up the target of protesters.

Repeatedly, the speakers stressed that the rights of the media are the same as those of the general public.

Police say if a street is “stripped” of parking, and no parking is allowed for the general public, outside of the aforementioned locations, it is done for a reason. KIRBY STRONGLY SUGGESTS THAT VANS AND CARS BE SENT WITH DRIVERS SO THAT IF WORKING PRESS MEMBERS MUST LEAVE THE VEHICLE, IT REMAINS ATTENDED. She said Chicago Police will not hesitate to tow city-owned vehicles if they are in “stripped” areas, so media representatives should expect to be cut no slack with live trucks or other vehicles that are parked where prohibited.