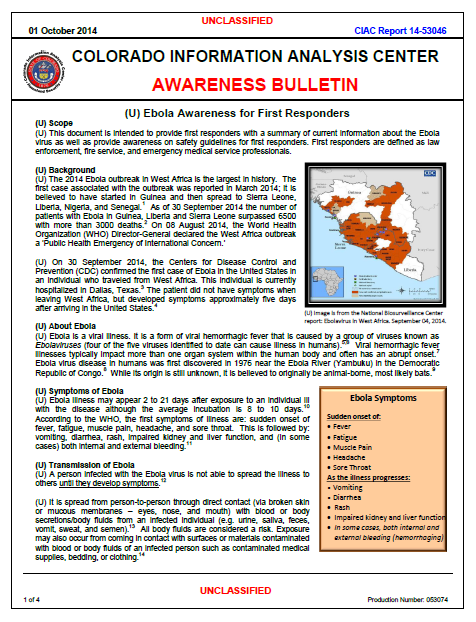 (U) This document is intended to provide first responders with a summary of current information about the Ebola virus as well as provide awareness on safety guidelines for first responders. First responders are defined as law enforcement, fire service, and emergency medical service professionals.

(U) The 2014 Ebola outbreak in West Africa is the largest in history. The first case associated with the outbreak was reported in March 2014; it is believed to have started in Guinea and then spread to Sierra Leone, Liberia, Nigeria, and Senegal. As of 30 September 2014 the number of patients with Ebola in Guinea, Liberia and Sierra Leone surpassed 6500 with more than 3000 deaths. On 08 August 2014, the World Health Organization (WHO) Director-General declared the West Africa outbreak a ‘Public Health Emergency of International Concern.’

(U) On 30 September 2014, the Centers for Disease Control and Prevention (CDC) confirmed the first case of Ebola in the United States in an individual who traveled from West Africa. This individual is currently hospitalized in Dallas, Texas. The patient did not have symptoms when leaving West Africa, but developed symptoms approximately five days after arriving in the United States.

(U) Ebola is a viral illness. It is a form of viral hemorrhagic fever that is caused by a group of viruses known as Ebolaviruses (four of the five viruses identified to date can cause illness in humans). Viral hemorrhagic fever illnesses typically impact more than one organ system within the human body and often has an abrupt onset. Ebola virus disease in humans was first discovered in 1976 near the Ebola River (Yambuku) in the Democratic Republic of Congo. While its origin is still unknown, it is believed to originally be animal-borne, most likely bats.

(U) Symptoms of Ebola

(U) Ebola illness may appear 2 to 21 days after exposure to an individual ill with the disease although the average incubation is 8 to 10 days. According to the WHO, the first symptoms of illness are: sudden onset of fever, fatigue, muscle pain, headache, and sore throat. This is followed by: vomiting, diarrhea, rash, impaired kidney and liver function, and (in some cases) both internal and external bleeding.

(U) Transmission of Ebola

(U) A person infected with the Ebola virus is not able to spread the illness to others until they develop symptoms (U) It is spread from person-to-person through direct contact (via broken skin or mucous membranes – eyes, nose, and mouth) with blood or body secretions/body fluids from an infected individual (e.g. urine, saliva, feces, vomit, sweat, and semen). All body fluids are considered a risk. Exposure may also occur from coming in contact with surfaces or materials contaminated with blood or body fluids of an infected person such as contaminated medical supplies, bedding, or clothing.

(U) Environmental Cleaning and Disinfection

(U) Following proper environmental cleaning and disinfecting procedures of surfaces, vehicles, and equipment reduces the risk of additional exposures to Ebola. The CDC ‘Interim Guidance for Environmental Infection Control in Hospitals for Ebola Virus’ provides detailed information to assist responders in developing their own agency’s procedures for such situations. It includes decontamination of the vehicle and equipment, hand hygiene, cough and respiratory hygiene, and proper use FDA approved medical PPE.

(U) These guidelines state that those who perform the environmental cleaning and disinfection should wear recommended PPE (described above) and consider wearing shoe and leg coverings. Face protection (facemask with goggles or face shield) is recommended when performing tasks such as liquid waste disposal that can generate splashes. The use of an EPA-registered hospital disinfectant that is intended for non-enveloped viruses such as norovirus, rotavirus, adenovirus, and poliovirus is ideal for disinfecting surfaces.