The following bulletin from the Colorado Information Analysis Center on the dangers to first responders stemming from the increasingly widespread practice of butane hash oil extraction was originally obtained and published by the firefighter news site Firefighter Close Calls. 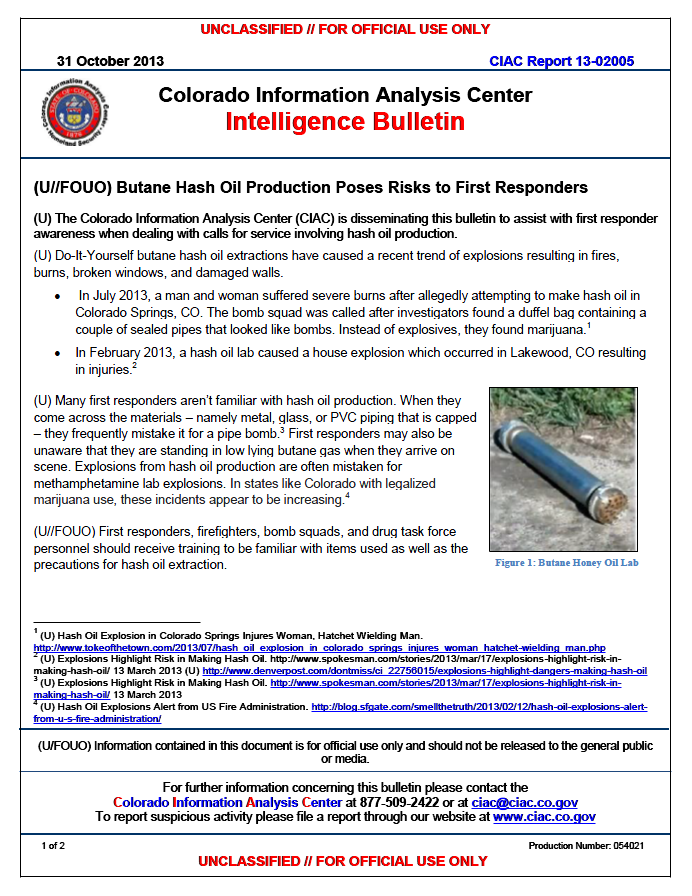 (U) The Colorado Information Analysis Center (CIAC) is disseminating this bulletin to assist with first responder awareness when dealing with calls for service involving hash oil production.

In July 2013, a man and woman suffered severe burns after allegedly attempting to make hash oil in Colorado Springs, CO. The bomb squad was called after investigators found a duffel bag containing a couple of sealed pipes that looked like bombs. Instead of explosives, they found marijuana.

In February 2013, a hash oil lab caused a house explosion which occurred in Lakewood, CO resulting in injuries.

(U) Many first responders aren’t familiar with hash oil production. When they come across the materials – namely metal, glass, or PVC piping that is capped – they frequently mistake it for a pipe bomb. First responders may also be unaware that they are standing in low lying butane gas when they arrive on scene. Explosions from hash oil production are often mistaken for methamphetamine lab explosions. In states like Colorado with legalized marijuana use, these incidents appear to be increasing.

(U//FOUO) First responders, firefighters, bomb squads, and drug task force personnel should receive training to be familiar with items used as well as the precautions for hash oil extraction.

(U) Colorado is the only state that regulates the production of hash oil but enforcement is spotty, and explosions persist.

(U) Hash oil, which is ingested by smoking, is obtained from the cannabis plant by solvent extraction.

(U) Hash oil is the most potent of three main cannabis products, which are herb (marijuana), resin (hashish), and oil (hash oil). Hash oil has some distinct advantages over traditional marijuana: It has very little smell, either in its solid form or when vaporized, is very portable, and can achieve intense effects with small amounts. Hash oil production doesn’t take a lot of ingredients and it doesn’t smell, making it much more difficult to detect.

(U) The most common form of hash oil is made by passing butane gas through a glass, metal, or PVC tube filled with cannabis plant matter. The low temperature of the liquid butane crystallizes the cannabis resins. As the butane passes through the tube, the crystallized resins are trapped in the liquid butane. The tube is left uncovered to allow the butane to evaporate. Since butane has such a low vaporizing temperature it evaporates quickly, leaving behind the crystallized resins only, which are collected from the glass container. This form is known as B.H.O. or “Butane Hash Oil”. Instructions can be found online.

(U) Cannabis can also be boiled in a solvent, then strained and the solvent is evaporated to yield hash oil. Flammable solvents used in extraction make this process dangerous.

(U) Without good ventilation, the vapors can build up and lie close to the floor near pilot lights, electrical outlets, discarded cigarette butts, etc., and pose an unseen yet dangerous threat because they don’t dissipate quickly. An open flame, static electricity, or anything that can spark the gas could result in an explosion.

(U/FOUO) Analytical Comment: Butane Hash Oil production is expected to increase in Colorado, therefore it is more likely that first responders will receive related calls for service. Given the inherent dangerous conditions of butane hash oil production, the demand for indicators and first responder training should also increase.