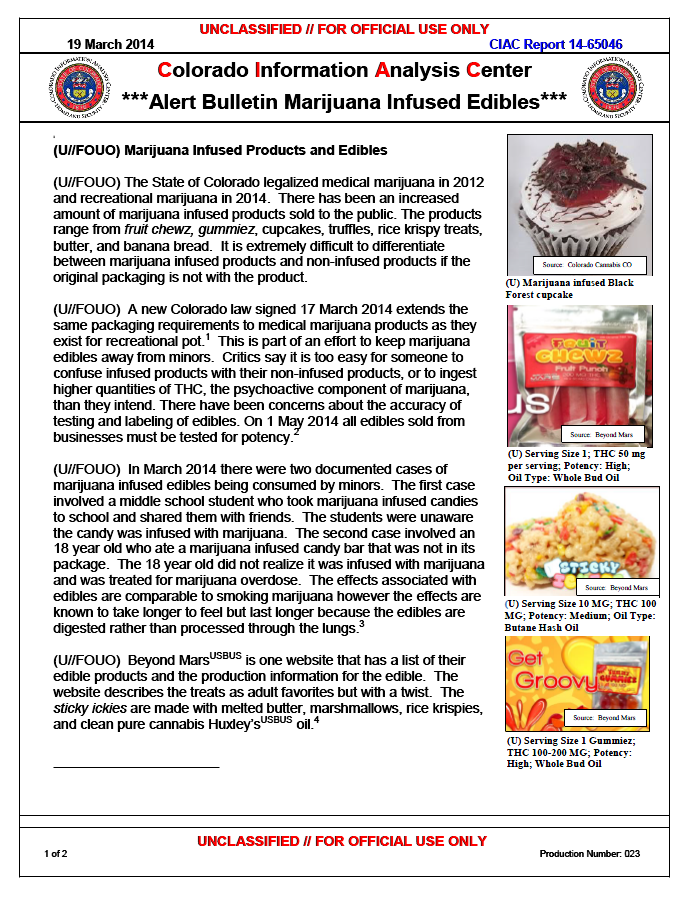 (U//FOUO) A new Colorado law signed 17 March 2014 extends the same packaging requirements to medical marijuana products as they exist for recreational pot. This is part of an effort to keep marijuana edibles away from minors. Critics say it is too easy for someone to confuse infused products with their non-infused products, or to ingest higher quantities of THC, the psychoactive component of marijuana, than they intend. There have been concerns about the accuracy of testing and labeling of edibles. On 1 May 2014 all edibles sold from businesses must be tested for potency.

(U//FOUO) In March 2014 there were two documented cases of marijuana infused edibles being consumed by minors. The first case involved a middle school student who took marijuana infused candies to school and shared them with friends. The students were unaware the candy was infused with marijuana. The second case involved an 18 year old who ate a marijuana infused candy bar that was not in its package. The 18 year old did not realize it was infused with marijuana and was treated for marijuana overdose. The effects associated with edibles are comparable to smoking marijuana however the effects are known to take longer to feel but last longer because the edibles are digested rather than processed through the lungs.

(U//FOUO) Beyond MarsUSBUS is one website that has a list of their edible products and the production information for the edible. The website describes the treats as adult favorites but with a twist. The sticky ickies are made with melted butter, marshmallows, rice krispies, and clean pure cannabis Huxley’sUSBUS oil.

(U//FOUO) With Colorado leading the way in the legalization of retail marijuana sales, it is expected that additional laws will be passed to address problems or loopholes as they are identified. Marijuana infused edibles and products are an easy alternative to smoking and are more attractive to those who have an interest in trying marijuana but prefer to be discreet. The popularity of marijuana infused edibles will increase the likelihood that someone will ingest it unintentionally as well as allow the products to be brought into locations where marijuana is not allowed and can go undetected.