The following publication was released by the Chairman of the Joint Chiefs of Staff on July 31, 2013. 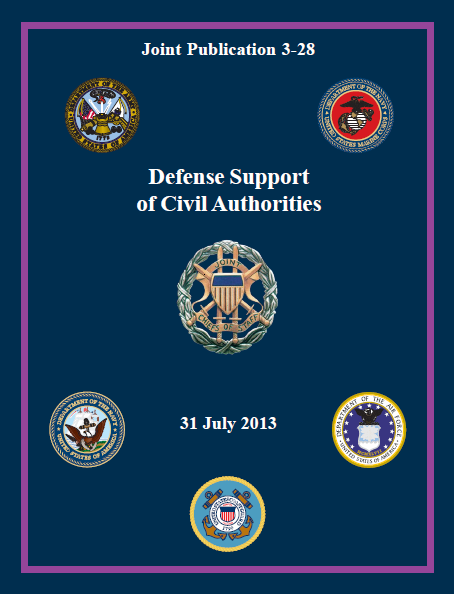 This publication has been prepared under the direction of the Chairman of the Joint Chiefs of Staff (CJCS). It sets forth joint doctrine to govern the activities and performance of the Armed Forces of the United States in DSCA operations, and it provides the doctrinal basis for interagency coordination during DSCA operations. It provides military guidance for the exercise of authority by combatant commanders and other joint force commanders (JFCs) and prescribes joint doctrine for operations, education, and training. It provides military guidance for use by the Armed Forces in preparing their appropriate plans. It is not the intent of this publication to restrict the authority of the JFC from organizing the force and executing the mission in a manner the JFC deems most appropriate to ensure unity of effort in the accomplishment of the overall objective.

1. The Nature of a Catastrophic Incident

a. A catastrophic incident, as defined by the NRF, is “any natural or man-made incident, including terrorism, that results in extraordinary levels of mass casualties, damage, or disruption severely affecting the population, infrastructure, environment, economy, national morale, and/or government functions.” Catastrophic incident is the same as catastrophic event as defined by DOD. A catastrophic event could result in significant nationwide impacts over a prolonged period of time. It almost immediately exceeds resources normally available to state, territory, tribal, local, and private-sector authorities in the impacted area, and it significantly interrupts governmental operations and emergency services to such an extent that national security could be threatened. These factors drive the urgency for coordinated national planning to allow for accelerated federal or national assistance.

d. When a situation is beyond the capability of an affected state or territory, the governor may request federal assistance from the President. The President may also proactively direct the federal government to provide supplemental assistance to state, territorial, tribal, and local governments to alleviate the suffering and damage resulting from disasters or emergencies.

a. Immediate Response. Under DODD 3025.18, Defense Support of Civil Authorities (DSCA), federal military commanders, heads of DOD components, and responsible DOD civilian officials have immediate response authority. In response to an RFA from a civil authority, under imminently serious conditions and if time does not permit approval from higher authority, DOD officials may provide an immediate response by temporarily employing the resources under their control, subject to any supplemental direction provided by higher headquarters, to save lives, prevent human suffering, or mitigate great property damage within the US. Immediate response authority is not an exception to the PCA, nor does it permit actions that would subject civilians to the use of military power that is regulatory, prescriptive, proscriptive, or compulsory.

(2) Immediate response ends when DOD assistance is no longer required (e.g., when there are sufficient resources and capabilities available from state, local, and other federal agencies to respond adequately) or when a DOD authority directs an end to the response. The DOD official directing a response under immediate response authority makes an assessment, no later than 72 hours after receipt of request for DOD assistance, as to whether there remains a need for the continued DOD support.

(3) Support provided under immediate response authority should be provided on an incremental, cost-reimbursable basis, where appropriate or legally required, but will not be delayed or denied based on the inability or unwillingness of the requester to make a commitment to reimburse DOD.

(5) The distance from the incident to the DOD office or installation is not a limiting factor for the provision of support under immediate response authority. However, DOD officials should use the distance and the travel time to provide support as a factor in determining DOD’s ability to support the request for immediate response.

(6) The scale of the event should also be a determining factor for whether or not to provide support to incidents that are several miles or hundreds of miles away from the installation under immediate response authority. In some cases of a catastrophic incident, the demands for life-saving and life-sustaining capabilities may exceed both the state’s and USG’s ability to mobilize sufficient resources to meet the demand. In these circumstances, installations and facilities that are not directly impacted should be prepared to provide immediate response support if they are able to save lives, prevent human suffering, or prevent great property damage.

b. Emergency Authority. In extraordinary emergency circumstances, where authorization by the President is impossible and duly constituted local authorities are unable to control the situation, involved federal military commanders are granted “emergency authority.” Emergency authority enables the involved military commander to engage in temporary actions to quell large-scale, unexpected civil disturbances to prevent significant loss of life or wanton destruction of property and to restore governmental function and public order. When duly constituted federal, state, territorial, or local authorities are unable or decline to provide adequate protection for federal property or federal governmental functions, federal action, including the use of federal military forces, is authorized when necessary to protect the federal property or functions. Responsible DOD officials and commanders will use all available means to seek presidential authorization through the chain of command while applying their emergency authority.