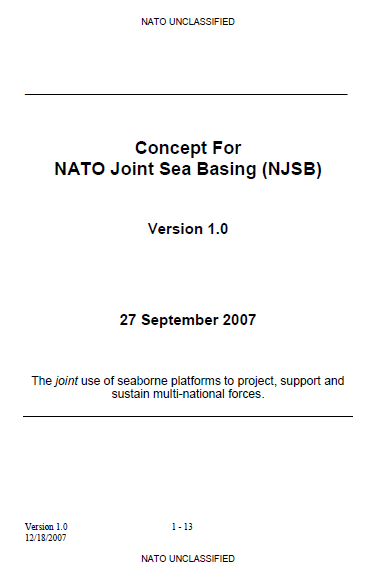 The joint use of seaborne platforms to project, support and sustain multi-national forces.

Where nations have a “tradition” of maritime and amphibious capabilities,
their national planners almost unconsciously factor-in those capabilities when
involved in planning situations. To this end, within those nations, a sea basing
capability exists, even if not identified as a formal concept. Other nations,
without such capabilities, may overlook them because they are not normally an
option. Within NATO, as a whole, however, a formal concept is essential to
ensure that there is a universal understanding of the potential of sea based
platforms. The security, flexibility and reliability of sea based platforms must be
considered as potential solutions to a wide range of geo-political, commercial
and security challenges in an increasingly crisis-prone world.

2. Sea basing can offer the NATO force commander a flexible range of
options in the support of the full spectrum of NATO interests including but not
limited to: humanitarian operations, disaster relief, search and rescue, noncombatant
evacuation operations, enforcement of sanctions and embargoes as
well as initial entry operations. A mission-tailored joint force under the sea
basing concept could be the first to arrive at the scene of a crisis. It could serve
as an enabling force by stabilizing a situation and preparing for follow-on
operations. Sea basing can offer a visible deterrent presence in full view of
potential aggressors or can operate from over the horizon to minimize political
provocation or gain operational advantage.

4. Sea basing, as a potential Alliance capability, is a transformational concept
for projecting, employing and sustaining military capabilities and multi- national
joint forces utilizing seaborne platforms. This provides the NATO force
commander with an additional optimized capability for the conduct of operations
without host nation support or a forward operating base (FOB). Fusing existing
and emerging assets and their associated capabilities, sea basing seeks to
enhance the Alliance’s strategic decision making ability with the most effective
solution in response to a crisis. Sea basing provides the opportunity to deploy
specific mission-tailored forces to a joint operations area without waiting for full
definition of any host nation support.

20. Sea basing provides scalable force projection options to the NATO force
commander through the sequential and concurrent integration of the primary
operational phases outlined below. These are normally sequential but may occur
concurrently during an operation. Executing sea based operations involve the
same Operational Phases of Strategic Deployment, Assembly, Employment,
Sustainment, Reconstitution and Redeployment. Sea basing would be a feasible
method of deploying, sustaining and withdrawing a NATO Response Force
(NRF) where the particular advantages of sea basing can be exploited to
optimize the footprint ashore.