Congressional Continuity of Operations (COOP): An Overview of Concepts and Challenges 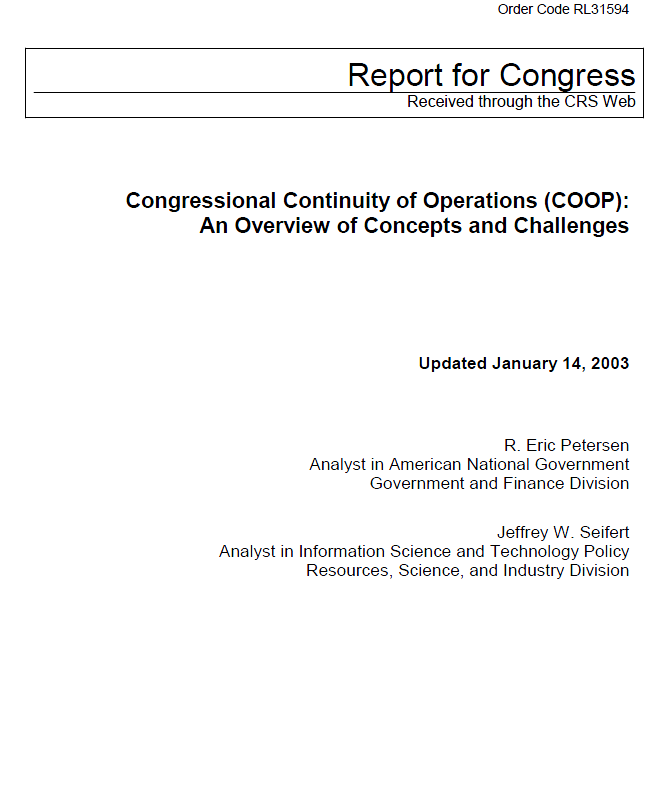 Interruptions of congressional operations by incidents such as episodic computer virus infections, or the anthrax contamination that took place during autumn 2001, have demonstrated the importance of congressional continuity of operations (COOP) planning. COOP planning refers to the internal effort of an organization to assure that the capability exists to continue essential functions in response to a comprehensive array of potential operational interruptions. For Congress, COOP
planning is related to a second level of preparedness, continuity of government (COG) planning. Congressional COG planning focuses on ensuring that Congress
is able to carry out its legislative responsibilities under Article I of the Constitution.
This report discusses the circumstances surrounding COOP planning, including
provisions for alternative meeting sites and methods for conducting House and
Senate meetings and floor sessions when Capitol facilities are not available.
Although this report does not discuss COG planning beyond its direct relationship
to COOP planning, a more comprehensive analysis of COG can be found in CRS
Report RS21089, Continuity of Government: Current Federal Arrangements and the
Future.

The task of ensuring that Congress can continue to carry out its constitutional
responsibilities in case of disruption, presents unique challenges in addition to the
operational concerns common to most organizations. One challenge involves the
relocation of legislative activities. There appears to be no constitutional bar to the
House and Senate adopting a resolution that approves meetings of either chamber
outside the Capitol in advance of doing so. In addition, the rules of each chamber
allow for committee activity beyond Washington, DC. However, concerns regarding
the availability of appropriate alternative facilities, communication and technical
capabilities, and providing the necessary physical security, have arisen.
Other concerns regarding physical security have prompted some observers to
propose creating a virtual or electronic Congress (e-Congress). Although these
suggestions have generally focused on the creation of a Web site accessible by
Members anywhere in the country, it is unclear exactly how an e-Congress would be
constituted and operated. Other challenges for COOP planning include maintaining
Member office information security, and the Legislative Information System (LIS).
Although current congressional COOP planning began prior to September 11,
2001, details surrounding House and Senate COOP planning are not publicly
available, and some specific information is excluded from this report to preserve
operational security. Contingency planning in the House, however, has evolved over
the past 20 years and there exists a range of backup strategies for maintaining critical
House legislative and administrative information systems. In the Senate, initial
COOP planning was completed in spring 2002, and continues to be refined.

Relocating Legislative Activities
Since the establishment of the District of Columbia as the national capital,
Congress has been unable to use the Capitol only once. During the War of 1812,
British troops burned the Capitol, forcing Congress to meet elsewhere in
Washington, DC, for 5 years. In response to the recent evacuations and closures of
the Capitol and House and Senate office buildings, both chambers made alternative
arrangements to conduct congressional business. Some staff were able to
communicate by wireless devices and e-mail systems, while others met in alternative
office space or their homes. Although some Members of Congress met together
informally, neither chamber met in session outside the Capitol.
During the Cold War, Congress established a remote meeting site under The
Greenbrier resort in White Sulphur Springs, West Virginia. The facility was
reportedly established to assist Congress to carry out its activities away from
Washington, DC in the event of nuclear attack. The site was equipped with facilities
for House of Representatives and Senate floor activities, and a large hall to
accommodate joint meetings.28 In the absence of a national attack, this facility was
never used, and has since been opened to the public for tours. At this time there are
no current public proposals for the establishment of a similar facility.
The current details of physically relocating Congress are not publicly available.
Congress has taken steps to authorize the relocation of floor activities, and some
proposals have been put forth regarding potential facilities for Congress to use in an
emergency. Under the rules of each chamber, House and Senate committee activity
beyond Washington, DC, is already permissible.