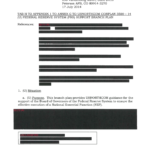 This branch plan provides USNORTHCOM guidance for the support of the Board of Governors of the federal Reserve System to ensure the effective execution of a National Essential Function (NEF).

Congressional Continuity of Operations (COOP): An Overview of Concepts and Challenges

Interruptions of congressional operations by incidents such as episodic computer virus infections, or the anthrax contamination that took place during autumn 2001, have demonstrated the importance of congressional continuity of operations (COOP) planning. COOP planning refers to the internal effort of an organization to assure that the capability exists to continue essential functions in response to a comprehensive array of potential operational interruptions. For Congress, COOP planning is related to a second level of preparedness, continuity of government (COG) planning. Congressional COG planning focuses on ensuring that Congress is able to carry out its legislative responsibilities under Article I of the Constitution.

Raven Rock Mountain Complex (RRMC) is a underground continuity of government facility built by the U.S. government in the early 1950s. It is located about 14 km (8.7 miles) east of Waynesboro, Pennsylvania, and 10 km (6.2 miles) north-northeast of Camp David, Maryland. It is also called the Raven Rock Military Complex, or simply Site R. Other designations and nicknames include “The Rock”, NMCC-R (National Military Command Center Reservation), ANMCC (Alternate National Military Command Center), AJCC (Alternate Joint Communications Center), “Backup Pentagon”, or “Site RT”; the latter refers to the vast array of communication towers and equipment atop the mountain. Colloquially, the facility is known as an “underground Pentagon”.

The Mount Weather Special Facility is a Continuity of Government (COG) facility operated by the Federal Emergency Management Agency (FEMA). The 200,000 square foot facility also houses FEMA’s National Emergency Coordinating Center. The site is located on a 434 acre mountain site on the borders of Loudon and Clarke counties, approximately 48 miles west of Washington, DC in Bluemont, Virginia. The above ground support facilities include about a dozen buildings providing communications links to the White House Situation Room.

Department of Housing and Urban Development

Department of Housing And Urban Development Continuity of Operations

Regional and Field Office Program Directors are responsible for providing all required information and support to their Regional Directors and Field Office Directors in all phases of COOP plan development, test, training, and exercise, and plan implementation. They must ensure appropriate coordination with the COOP Coordinators in their respective Headquarters program office.