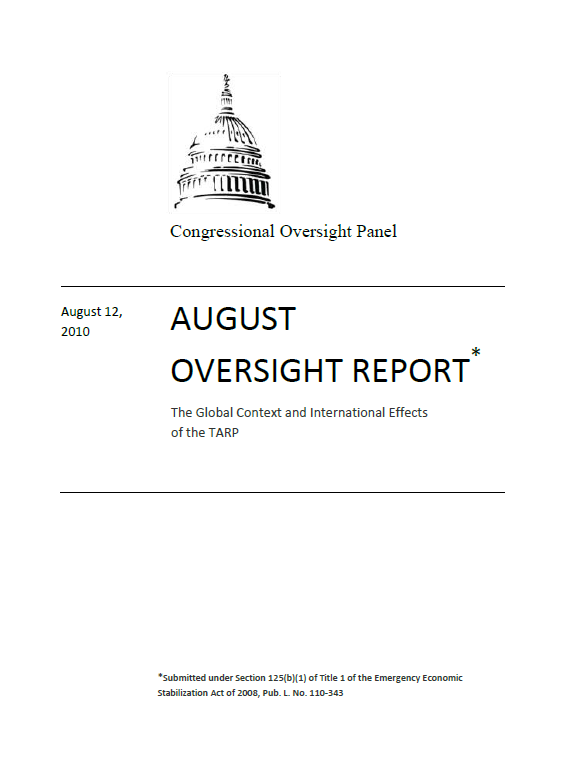 The financial crisis that peaked in 2008 began in the United States one mortgage at a time. Millions of people, attracted by the prospect of homeownership or refinancing and low initial rates, signed mortgages that they could afford only so long as home prices continued to rise. The mortgages were bundled, chopped into fractional ownership, sold and re-sold, and used as the basis for huge financial bets. When the housing market collapsed, many borrowers faced foreclosure, and many investors faced huge losses.

In an earlier era, a mortgage crisis that began in a few regions in the United States might have ended there as well. But by 2008, the global financial system had become deeply internationalized and interconnected. Mortgages signed in Florida, California, and Arizona were securitized, repackaged, and sold to banks and other investors in Europe, Asia, and around the world. At the same time, other countries were experiencing their own housing booms fueled by new financial products. The result was a truly global financial crisis.

The conventional wisdom in the years immediately before the crisis held that banks that operated across global markets were more stable, given their ability to rely on a collection of geographically dispersed businesses. The crisis showed, however, that links within the financial system could magnify, rather than reduce, risks, by, for example, allowing financial firms to become overexposed to a single sector in a single country. When subprime borrowers began to default on their mortgages, banks around the world discovered that their balance sheets held the same deteriorating investments. The danger was amplified by the high leverage created by layers of financial products based on the same underlying assets and by the fact that banks around the world depended on overnight access to funding in dollar-denominated markets. When short-term lenders began to question the ability of banks to repay their obligations, markets froze, and the international financial system verged on chaos.

Faced with the possible collapse of their most important financial institutions, many national governments intervened. One of the main components of the U.S. response was the $700 billion Troubled Assets Relief Program (TARP), which pumped capital into financial institutions, guaranteed billions of dollars in debt and troubled assets, and directly purchased assets. The U.S. Treasury and Federal Reserve offered further support by allowing banks to borrow cheaply from the government and by guaranteeing selected pools of assets. Other nations‟ interventions used the same basic set of policy tools, but with a key difference: While the United States attempted to stabilize the system by flooding money into as many banks as possible – including those that had significant overseas operations – most other nations targeted their efforts more narrowly toward institutions that in many cases had no major U.S. operations.  As a result, it appears likely that America‟s financial rescue had a much greater impact internationally than other nations‟ programs had on the United States. This outcome was likely inevitable given the structure of the TARP, but if the U.S. government had gathered more information about which countries‟ institutions would most benefit from some of its actions, it might have been able to ask those countries to share the pain of rescue. For example, banks in France and Germany were among the greatest beneficiaries of AIG‟s rescue, yet the U.S. government bore the entire $70 billion risk of the AIG capital injection program. The U.S. share of this single rescue exceeded the size of France‟s entire $35 billion capital injection program and was nearly half the size of Germany‟s $133 billion program.

Even at this late date, it is difficult to assess the precise international impact of the TARP or other U.S. rescue programs because Treasury gathered very little data on how TARP funds flowed overseas. As a result, neither students of the current crisis nor those dealing with future rescue efforts will have access to much of the information that would help them make wellinformed decisions. In the interests of transparency and completeness, and to help inform regulators‟ actions in a world that is likely to become ever more financially integrated, the Panel strongly urges Treasury to start now to report more data about how TARP and other rescue funds flowed internationally and to document the impact that the U.S. rescue had overseas. Going forward, Treasury should create and maintain a database of this information and should urge foreign regulators and multinational organizations to collect and report similar data. The crisis also underscored the fact that the international community‟s formal mechanisms to resolve potential financial crises are very limited. Even though the TARP legislation required Treasury to coordinate its programs with similar efforts by foreign governments, the global response to the financial crisis unfolded on an ad hoc, informal, countryby-country basis. Each individual government made its own decisions based on its evaluation of what was best for its own banking sector and for its own domestic economy. Even on the occasions when several governments worked together to rescue specific ailing institutions, as in the rescues of European banks Dexia and Fortis, national interests often came to the fore. These ad hoc actions ultimately restored a measure of stability to the international system, but they underscored the fact that the internationalization of the financial system has outpaced the ability of national regulators to respond to global crises.

In particular, the crisis revealed the need for an international plan to handle the collapse of major, globally significant financial institutions. A cross-border resolution regime could establish rules that would permit the orderly resolution of large international institutions, while also encouraging contingency planning and the development of resolution and recovery plans. Such a regime could help to avoid the chaos that followed the Lehman bankruptcy, in which foreign claimants struggled to secure priority in the bankruptcy process, and the struggles that preceded the AIG rescue, in which the uncertain effect of bankruptcy on international contracts put the U.S. government under enormous pressure to support the company. Additionally, the development of international regulatory regimes could help to discourage regulatory arbitrage, instead encouraging individual countries to compete in a “race to the top” by adopting more effective regimes at the national level. Such regimes would also provide a plan of action in the event that a financial crisis hit an internationally significant institution in a country that was too small to bear the cost of a bailout. In the most recent crisis, the Netherlands‟ rescue efforts totaled 39 percent of its GDP, and Spain‟s totaled 24 percent, raising the specter that a future crisis could swamp the ability of smaller nations with large banking sectors to respond in absence of an international regime.

Moving forward, it is essential for the international community to gather information about the international financial system, to identify vulnerabilities, and to plan for emergency responses to a range of potential crises. The Panel recommends that U.S. regulators encourage regular crisis planning and “war gaming” for the international financial system. This recommendation complements the Panel‟s repeated recommendations that Treasury should engage in greater crisis planning and stress testing for domestic banks. Financial crises have occurred many times in the past and will undoubtedly occur again in the future. Failure to plan ahead will only undermine efforts to safeguard the financial system. Careful policymakers would put plans in place before the next crisis, rather than responding on an ad hoc basis at the peak of the storm. 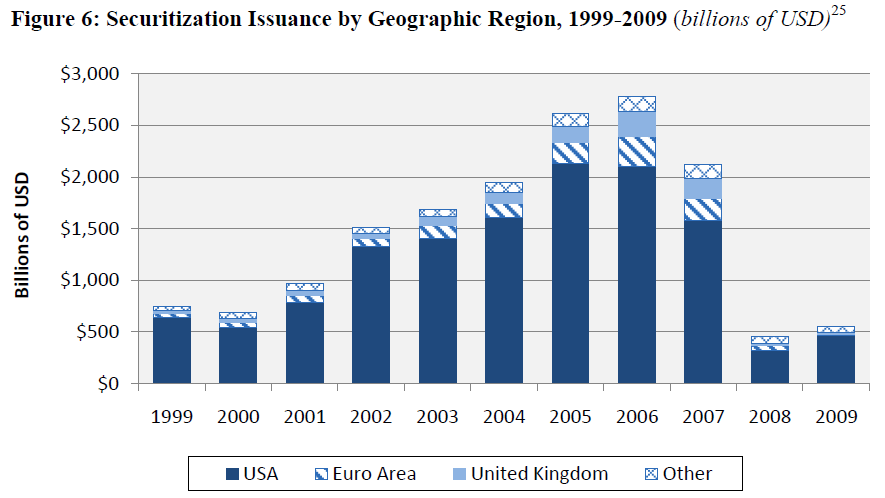 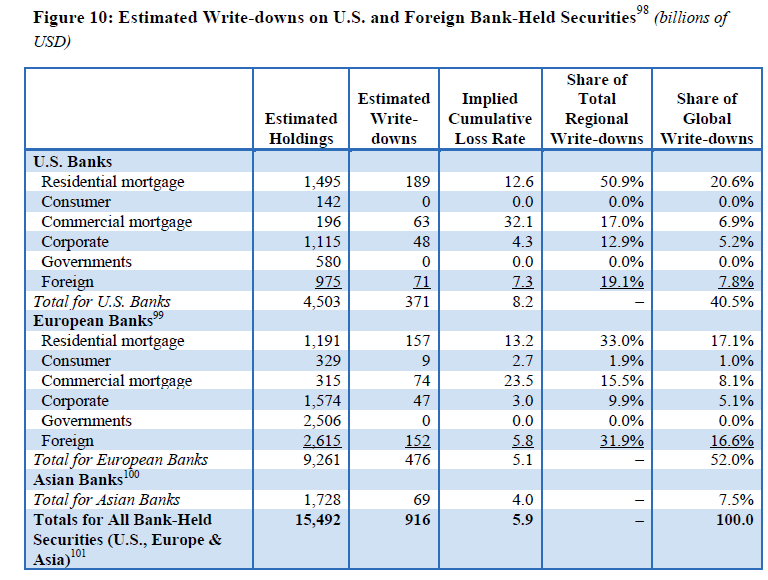 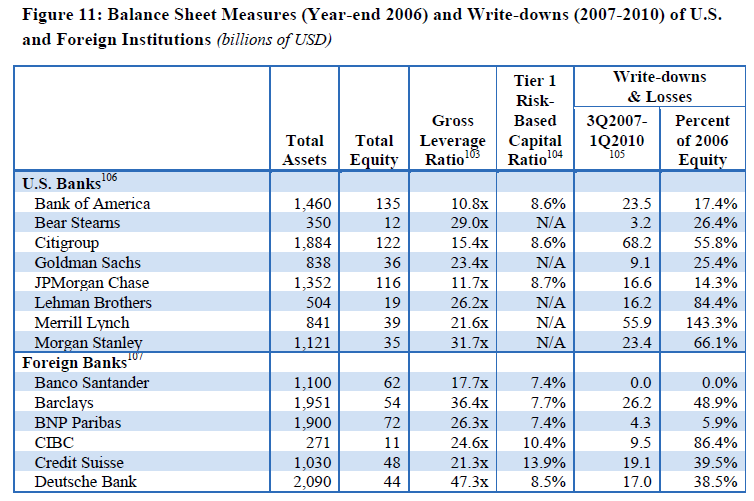