The following list of terms and definitions for counterintelligence professionals was obtained from the Defense Security Service Center for Development of Security Excellence’s Facility Security Officer Toolkit. 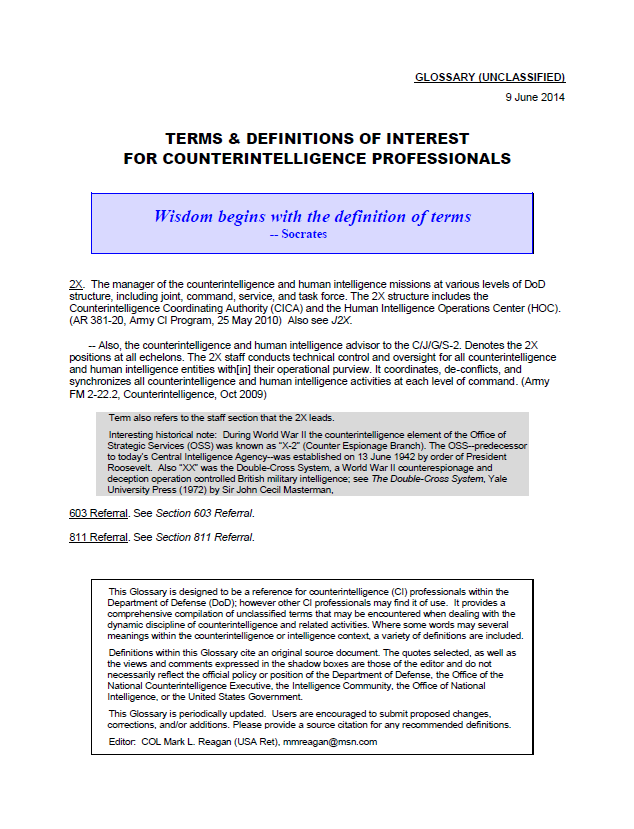 Definitions within this Glossary cite an original source document. The quotes selected, as well as the views and comments expressed in the shadow boxes are those of the editor and do not necessarily reflect the official policy or position of the Department of Defense, the Office of the National Counterintelligence Executive, the Intelligence Community, the Office of National Intelligence, or the United States Government.

— Also, influence operations organized by the Soviet government. These include white, gray, and black propaganda, as well as disinformation. (Encyclopedia of Espionage, Intelligence, and Security by The Gale Group, Inc)

— Also, the Soviet term for strategies that in the West would be described as black propaganda. The purpose was to denigrate ‘‘the main adversary’’ by using whatever disinformation channels were available to spread false stories, plant bogus reports into the media, spread untrue rumors, and support Soviet foreign policy objectives by undermining confidence in its opponents. (Historical Dictionary of Cold War Counterintelligence by Nigel West)

— Also, a form of political warfare conducted by Soviet intelligence and security services to influence the course of world events. Active measures ranged “from media manipulations to special actions involving various degrees of violence” and included disinformation, propaganda, counterfeiting official documents, assassinations, and political repression, such as penetration in churches, and persecution of political dissidents. (Extract from Christopher Andrew and Vasili Mitrokhin, The Mitrokhin Archive: The KGB in Europe and the West, 2000)

— Also, arrangements made through documentary, oral, technical, fiscal, physical, or other means to support covers (both individual and organizational). A backstopped cover provides sufficient documentation to project an identity in the immediate area or circumstance and in primary USG and commercial information systems. Backstopping cover may be constructed to withstand scrutiny ranging from casual or unwitting general population to a targeted hostile adversary. (DTM 08-050, Defense Cover Program Guidance (U), 31 Mar 2009 w/ chg 2 dated 14 Apr 2011)

— Also, verification and support of cover arrangements for an agent [case officer or intelligence operative] in anticipation of inquiries or other actions that might test credibility of his or her cover. (Spy Book)

— Also, a CIA term for providing appropriate verification and support of cover arrangements for an agent or asset in anticipation of inquiries or other actions which might test the credibility of his or its cover. (Senate Report 94-755, Book I – Glossary, 26 Apr 1976)

Dead Drop. A clandestine location for transferring material to or from an agent or asset. (National HUMINT Glossary)

— Also, a place where a person might leave communications or material in concealment for another person. It serves as a cutout between human elements of a clandestine organization. (AFOSI Instruction 71-101, 6 Jun 2000)

— Also, a place, unattended by witting individuals, to which communications, materials, or equipment can be left by one individual and from which they can be taken by another individual without either meeting or, ordinarily, seeing one another. Also called a dead letter box, or simply drop. (AFOSI Manual 71-142, OFCO, 9 Jun 2000)

— Also, a prearranged hidden location used for the clandestine exchange of packages, messages, and payments, which avoids the necessity of an intelligence officer and an agent being present at the same time. (FBI — Affidavit: USA vs. Robert Philip Hanssen, 16 Feb 2001)

— Also, a secret location where materials can be left in concealment for another party to retrieve. This eliminates the need for direct contact in hostile situations. (CI Centre Glossary)

— Also, a preferred means of covert communications in denied areas, separates the agent and handler [case officer] by time, but carries the risk of leaving the package unattended in an environment that could change without warning. (Spycraft, p. 61)

— Also, a predetermined secret location where [case] officers and agents leave messages and other items for undetected collection by other parties. (Encyclopedia of the CIA, 2003)

— Also, a clandestine communications technique, the dead drop allows agents to exchange messages and other items without the need for a meeting that might attract the attention of hostile surveillance. The dead drop is usually an innocuous, prearranged site where a package or film canister can be secreted temporarily so it can be recovered by the addressee. Ideally, the location is sufficiently innocent to enable both parties to visit it, at different times, without compromising themselves. The use of dead drops is standard tradecraft for espionage professionals, and is usually associated with a remote signaling arrangement so both sides can indicate to the other when a particular drop is ready for servicing. The objective is to obviate the need for personal contact that in denied areas is high risk. (Historical Dictionary of Cold War Counterintelligence, 2007)

Honey Pot. A trap set to detect, deflect, or in some manner counteract attempts at unauthorized use of information systems. Generally it consists of a computer, data, or a network site that appears to be part of a network, but is actually isolated, (un)protected, and monitored, and which seems to contain information or a resource of value to attackers. (JP 1-02 and JP 3-13.4, Military Deception)

— Also, a system (e.g., a web server) or system resource (e.g., a file on a server) that is designed to be attractive to potential crackers and intruders and has no authorized users other than its administrators. (CNSSI No. 4009, National Information Assurance Glossary, 26 April 2010)

— Also, in computer terminology, a trap set to detect, deflect, or in some manner counteract attempts at unauthorized use of information systems. Generally it consists of a computer, data, or a network site that appears to be part of a network but which is actually isolated, (un)protected, and monitored, and which seems to contain information or a resource that would be of value to attackers. (Wikipedia; accessed 18 Jan 2011)

Logic Bomb. A piece of code intentionally inserted into a software system that will set off a malicious function when specified conditions are met. (NIST, Glossary of Key Information Security Terms, May 2013)

— Also, computer jargon for programmed instructions clandestinely inserted into software, where they remain inactive and undetected until the computer reached a certain point in its operations, at which time the instructions take over. (Leo D. Carl, The CIA Insider’s Dictionary, 1996)

— Also, [in cyber usage] also known as a “time bomb,” a program that allows a Trojan to lie dormant and then attack when the conditions are just right. Triggers for logic bombs include a change in a file, a particular series of keystrokes, or a specific time or date. (McAfee Labs – Threat Glossary)

Wilderness of Mirrors. The organizational culture of the secret services. In it deceptions are false, lies are truth, the reflections are illuminating and confusing. The phrase centers on the problem of the reliability of the secret information about espionage and the identity of spies. The mirrors comprise information from defectors, disinformation from the opposing sides in the Cold War, deviously covered false trails, and facts thought to be valid but incomplete (and later established as totally untrue). (Encyclopedia of Cold War Espionage, Spies, and Secret Operations, 3rd edition, 2012)

— Also, expression to sgnify the confusion of the world of intelligence and espionage. James Jesus Angleton, long-time head of counterespionage for the CIA, is generally credited with coining the term, having written that the Wilderness of Mirrors “is that… myriad of strategms, deceptions, artifices and all other devices of disinformation which the Soviet bloc and its coordinated intelligence services use to confuse and split the West,” thus producing “an ever-fluid landscape where fact and illusion merge….” (Spy Book)

Window Dressing. [Tradecraft jargon] Ancillary materials that are included in a cover story or deception operation to help convince the opposition or casual observers that what they are observing is genuine.
(CI Centre Glossary)