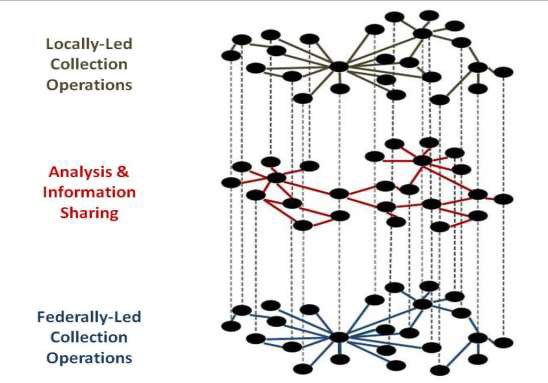 An organization representing police chiefs from major cities around the U.S. is promoting an initiative to strengthen intelligence collection at the local level, increasing the integration of state and local law enforcement into the larger structure of the U.S. intelligence community.

In 2011, the Major Cities Chiefs’ Association (MCCA) began the initiative aimed at strengthening domestic intelligence collection efforts and creating a “more defined, whole-of-government architecture that interconnects and better integrates state and local criminal intelligence and counterterrorism operations.”  The Major Cities Chiefs’ Criminal Intelligence Enterprise (CIE) is an effort to create “better connectivity” between “state and local counterterrorism and intelligence units and among locally-led operations, fusion centers, and federally-led operations” such as Joint Terrorism Task Forces (JTTFs) and Field Intelligence Groups (FIGs). The initiative is being organized around the  pre-existing infrastructure of the Major Cities Chiefs’ Intelligence Commanders Group (MCCICG), a working group of the MCCA that played a significant role in creating the unified national suspicious activity reporting process.

A nine page proposal for the CIE written in March 2012 by MCCICG Steering Committee Chair Greg McCurdy argues that the “unprecedented growth of transnational organized crime” poses a significant threat to national security and public safety” requiring that “criminal intelligence and information sharing should be enhanced, and collaboration with state and local law enforcement should continue to grow and improve.”  Criminal threats including “well-organized and disproportionately funded drug trafficking, human smuggling, and weapons trafficking” continue to threaten American communities as well as “violent extremism” and homegrown terrorism.  In order to dismantle these criminal enterprises, McCurdy argues that “community engagement programs” including those designed to enable citizens to report suspicious activities are insufficient:

To address this deficiency, McCurdy outlines four objectives for the CIE.  The first objective is increasing “connectivity among state and local counterterrorism and intelligence units and among locally-led operations, fusion centers, and federally-led operations.”  Discussing this objective, McCurdy emphasizes that “transnational crime and terrorism know no geographic boundaries” and therefore “the law enforcement intelligence community must virtually eliminate theirs.”  He adds that “actions that occur in a different state or, for that matter, in a different country now become relative.”

The second objective of the CIE is the “development and sharing of local threat domain assessments so that the collection component of each major locality can better address the specific threats that affect their individual communities.”  This involves local law enforcement agencies working with fusion centers to assess their “respective domains to identify what criminal or terrorist groups pose the greatest threat” and establish “Standing Information Needs (SINs), Prioritized Information Needs (PINs), and Intelligence Directives.”

Third, the CIE will coordinate the “development, implementation, and sharing of local collection plans” for intelligence gathering.  The CIE will “provide the necessary template that state and local counterterrorism and intelligence units need to establish a standardized systematic process that identifies the tools and methods that can be used to effectively and properly collect crime and terrorism information from within their threat domain.”  Increased interconnection generated by the CIE will “enable local law enforcement agencies to expand their geographical reach while physically maintaining their jurisdictional boundaries.”  Utilizing “interconnected collection efforts”, the CIE will allow local law enforcement to “effectively but appropriately” transcend borders.

The fourth objective of the CIE initiative is to develop and deploy a “secure, socially driven interface” resembling Facebook that enables “state and local intelligence and counterterrorism personnel to effectively network while still adhering to strict privacy guidelines.”  McCurdy says that “in the state and local criminal intelligence and counterterrorism environment where collaboration is of the utmost importance, the use of socially driven networking becomes advantageous” allowing “a detective in Las Vegas . . . to securely customize a profile page, build a network of ‘friends’ who are in fact colleagues in other agencies, and network by sharing nonsensitive information through wall posts, messages, and status updates . . .”

Besides McCurdy’s proposal, little information about the initiative is publicly available, though the initiative is mentioned in the 2012 annual report for the MCCA as a “continuing priority.”  Congressional testimony from the former head of the MCCA shows that the group was asking as early as 2009 to use the MCCICG to construct a “integrated national intelligence capability.”