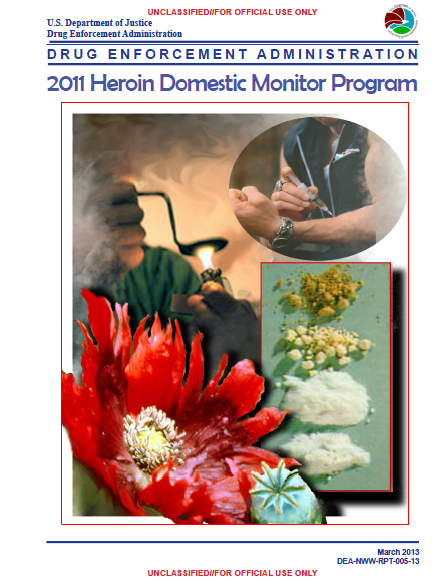 HDMP data for 2011 confirm that South America continues to be the primary source of heroin found east of the Mississippi River, while Mexican black tar and brown powder heroin clearly dominate the drug market west of the Mississippi. In 2011, Southwest Asian heroin continued to account for only a small portion of HDMP exhibits with its availability limited primarily to east coast markets such as Baltimore, Maryland; Newark, New Jersey; New York, New York; Richmond, Virginia; and Washington, D.C. In 2011, and for the sixth consecutive year, no Southeast Asian heroin samples were purchased through the HDMP.

South America remained the primary source of heroin found east of the Mississippi River. According to 2011 HDMP data, SA heroin samples exhibited the highest average purity within the program at 31.1 percent, an increase of 5.2 percentage pointsi from 2010. HDMP data further indicated that the average price per milligram pure for SA heroin dropped in 2011 to $1.18, a noteworthy decrease from the 2010 price of $1.75 per milligram pure.

SWA heroin continued to account for only a small portion of HDMP exhibits (23 of 642 exhibits). In 2011, SWA heroin had the lowest recorded average purity within the HDMP at 12.3 percent, while maintaining the highest average price per milligram pure at $1.66. In 2010, SWA heroin averaged 20.9 percent pure with an average price of $1.21 per milligram pure. SWA heroin exhibits were purchased in Atlanta, Georgia; Baltimore, Maryland; New York, New York; Newark, New Jersey; Richmond, Virginia; St. Louis, Missouri; and Washington, DC.

HDMP data from 2005 compared against 2011 data reflected a 42 percent increase in heroin exhibits whose signature was classified as UNK by the DEA Special Testing and Research Laboratory (SFL1). In 2005, 139 HDMP exhibits were classified as UNK, while in 2011 that number increased to 197. (See Appendix A. Note: Appendices B and C reflects data from 2010 and 2009, respectively.) In 2011, Atlanta, Chicago, Detroit, New York, San Juan, St. Louis, and Washington, DC, all experienced notable increases in heroin exhibits whose source of origin was UNK.