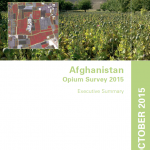 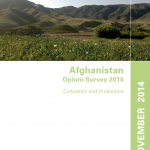 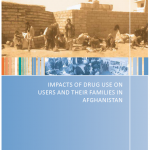 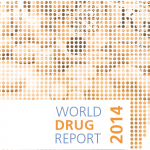 The World Drug Report provides an annual overview of the major developments in drug markets for the various drug categories, ranging from production to trafficking, including development of new routes and modalities, as well as consumption. 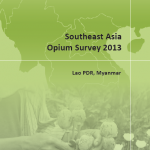 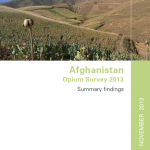 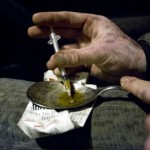 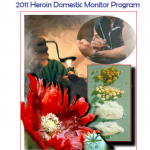 Afghanistan cultivates, produces and process narcotics that are a threat to the region and worldwide. However, the international community also needs to understand that Afghanistan itself is a victim of this phenomenon. The existence of hundreds of thousands of problem drug users, as well as decades of civil war, terrorism and instability are all related to the existence of narcotics in the country. According to the findings of this survey, the total area under cultivation was estimated at 154,000 hectares, an 18 per cent increase from the previous year. Comparisons of the gross and net values with Afghan’s licit GDP for 2012 also serve to highlight the opium economy’s impact on the country. In 2012, net opium exports were worth some 10 per cent of licit GDP, while the farmgate value of the opium needed to produce those exports alone was equivalent to 4 per cent of licit GDP. On the basis of shared responsibility and the special session of the United Nation’s General assembly in 1998, the international community needs to take a balanced approach by addressing both the supply and the demand side equally. In addition, more attention needs to be paid to reduce demand and the smuggling of precursors as well as provide further support to the Government of Afghanistan.

The findings of the 2013 Opium Risk Assessment in the Southern, Eastern, Western and Central regions points to a worrying situation. The assessment suggests that poppy cultivation is not only expected to expand in areas where it already existed in 2012, e.g. in the area north of the Boghra canal in Hilmand province or in Bawka district in Farah province but also in new areas or in areas where poppy cultivation was stopped. In eastern Afghanistan, in Nangarhar province, farmers resumed cultivation even in districts where poppy has not been present for the last four years. In the Northern and Northeastern region, the provinces of Balkh and Takhar which were poppy-free for many years are at risk of resuming poppy cultivation.

Despite the eradication of opium poppy by Governor-led Eradication (GLE) having increased by 154% in comparison to its 2011 level (9,672 hectares eradicated in 2012), the total area under opium poppy cultivation in Afghanistan was estimated at 154,000 hectares (125,000 – 189,000) in 2012. While that represents a 18% increase in cultivation, potential opium production was estimated at 3,700 tons (2,800 – 4,200 tons) in 2012, a 36% decrease from the previous year. This was due to a decrease in opium yield caused by a combination of a disease of the opium poppy and adverse weather conditions, particularly in the Eastern, Western and Southern regions of the country.

The Ministry of Counter Narcotics (MCN) and the United Nations Office on Drugs and Crime (UNODC) have joint responsibility of monitoring and verifying opium poppy eradication activities led by the Governors. Governor-led eradication activities are envisaged in all poppy cultivating provinces. Two MCN/UNODC reporters are deputed in MCN for collection of daily reports from the field verifiers and two MCN staffs are assigned for preparing weekly report under UNODC supervision as a part of capacity building activity.

The total area under opium poppy cultivation in Afghanistan in 2011 was estimated at 131,000 hectares (ha), a 7% increase compared to 2010. 95% of total cultivation took place in nine provinces in the Southern and Western regions, which include the most insecure provinces in the country. This confirms the link between insecurity and opium cultivation observed since 2007. The number of poppy-free provinces decreased from 20 in 2010 to 17 in 2011 as Baghlan and Faryab provinces in the Northern region and Kapisa province in the Eastern region lost their poppy-free status. Potential opium production in 2011 was estimated at 5,800 mt, a 61% increase compared to 2010, when opium yields were much reduced due to plant diseases.

The following photos were released by the DoD and NATO over the last month. See also: US/NATO Troops Patrolling Opium Poppy Fields in Afghanistan

The result of this assessment indicates that the current high price of opium did not produce an increase in opium cultivation in the highest cultivating provinces of Hilmand and Kandahar. In these two provinces the cultivation is expected to decrease in 2011. The reasons for this development were multiple and differed from area to area. In parts of Hilmand and Kandahar, farmers reported the persistence of cold and dry climate conditions which led to crop failure as the poppy would not germinate. There also been a changing political environment in Hilmand with the Governor taking initiatives to convince elders and farmers to reduce the amount of poppy planted. This was not systematically captured by the survey, but it may have played a role as well. In both provinces, military operations were conducted by Afghan and international forces around the time of poppy planting in main poppy cultivating areas. Although these operations were not directed against poppy farmers, the coincidence of troupes being present at planting time may also have discouraged farmers from planting poppy.

The magnitude and importance of Afghanistan’s opium economy are virtually unprecedented and unique in global experience —it has been roughly estimated as equivalent to 36% of licit (i.e. non-drug) GDP in 2004/05, or if drugs are also included in the denominator, 27% of total drug-inclusive GDP (see Chapter 2). The sheer size and illicit nature of the opium economy mean that not surprisingly, it infiltrates and seriously affects Afghanistan’s economy, state, society, and politics. It generates large amounts of effective demand in the economy, provides incomes and employment including in rural areas (even though most of the final “value” from Afghan opium accrues outside the country), and supports the balance of payments and indirectly (through Customs duties on drug-financed imports) government revenues. The opium economy by all accounts is a massive source of corruption and undermines public institutions especially in (but not limited to) the security and justice sectors. There are worrying signs of infiltration by the drug industry into higher levels of government and into the emergent politics of the country. Thus it is widely considered to be one of the greatest threats to state-building, reconstruction, and development in Afghanistan.

The majority of the 20 Afghan provinces that were poppy-free in 2009 will remain so this year. Yet, three provinces (Baghlan, Faryab and Sari Pul, all in the north) risk showing the beginning of a trend reversal, with a minimal increase in cultivation in the districts with higher insecurity. Five other provinces (Kunar, Nangarhar, Kabul, Laghman and Badakhshan), not poppy-free so far, are also expected to have negligible amounts of poppies.

(U//FOUO) JIEDDO Report: Alternative Motivations for IED Use in Afghanistan

These photos have been released by the Department of Defense and ISAF over the last few years. Some of the photos discuss instances of troops helping with the destruction of poppy fields. Many of the photos do not mention anything…