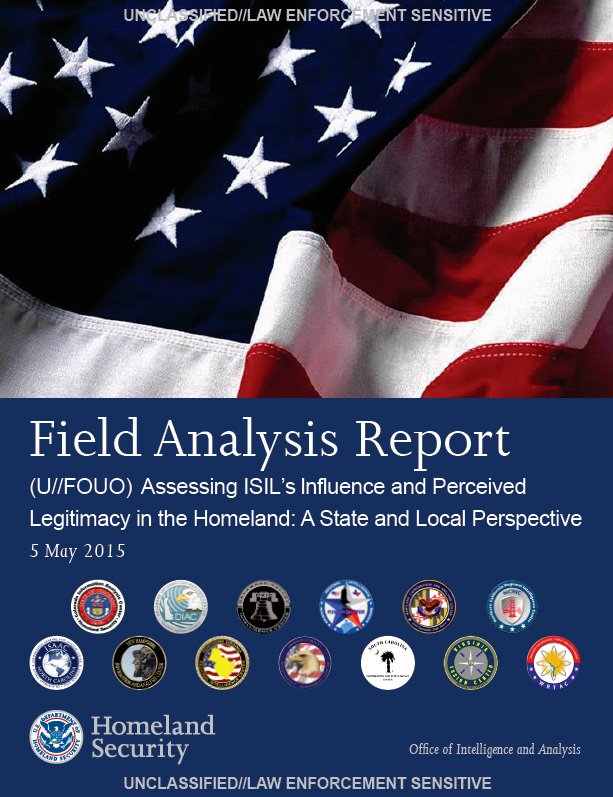 (U//FOUO) Scope: This Field Analysis Report (FAR) is designed to support awareness and inform enforcement and collection operations of federal, state, and local partners involved in homeland security and counterterrorism efforts. Some of the activities described in the FAR may be constitutionally protected activities and should be supported by additional facts to justify increased suspicion. The totality of relevant circumstances should be evaluated when considering any law enforcement response or action. Our assessment of the level of the Islamic State of Iraq and the Levant’s (ISIL) name recognition since its declaration of a caliphate in June 2014 is based on a review of suspicious activity reporting (SAR) across the United States between 1 January and 30 December 2014, criminal complaints of US persons charged with supporting or seeking to support ISIL, Bureau of Prisons (BOP) intelligence reporting, and DHS I&A open source reporting to assess the influence of ISIL’s messaging campaign within the United States and ISIL’s perceived legitimacy among homegrown violent extremists (HVEs).

(U//LES) We assess an increased volume of ISIL-related SARs between June 2014 and January 2015 signifies the penetration and recognition of its brand because much of this reporting centered on ISIL symbols, imagery, and support for the group voiced on social media.

(U//FOUO) We judge––based on the body of SAR, criminal complaints, BOP reports, and open source reporting consulted throughout this FAR (see Scope and Source Summary Statements)––that ISIL’s messaging is resonating with US-based violent extremists due to its championing of a multifaceted vision of a caliphate that prioritizes a wide array of justifications and obligations for support, especially compared to other terrorist groups with whom it competes for support, like al-Qa‘ida (AQ) and its affiliates. ISIL’s messaging is amplified through a sophisticated use of social media tailored to a global audience.

(U//LES) A high volume of SAR reporting—of varying degrees of potential threats—associated with ISIL will likely persist as long as ISIL sustains its messaging campaign and perceived military and governance successes, specifically so long as it is perceived to successfully defend its self-declared caliphate.

(U//FOUO) We assess ISIL’s name recognition is built in large measure on its military successes and rapid territorial gains in Syria and Iraq in 2014. The allure for potential HVEs also rests with ISIL’s carefully constructed image, based on the perceived legitimacy of its self-proclaimed re-establishment of the caliphate, governance efforts according to their interpretation of Islamic law, and ability to project power through continued expansion—all conveyed via a highly organized messaging effort. The prevalence of media coverage surrounding ISIL’s exploits challenges our ability to isolate and assess how central a role ISIL-directed messaging, amplified by individuals who share that messaging online though their individual social media platforms, plays in influencing demonstrations of ISIL support in the United States.

(U//FOUO) ISIL espouses a violent extremist counterculture and vision focused on the expansion of its self-proclaimed caliphate. This approach is at odds with the model traditionally espoused by AQ, which focuses on driving perceived Western aggressors from Muslim-majority countries through terrorist attacks in the West, before conquest of a state or establishment of a caliphate. The ISIL narrative includes a positive vision—in the eyes of its members—of an alternative political system that is to be established now, as opposed to at some point in the distant future.

(U//FOUO) As a consequence, a broader and more diverse pool of individuals in the United States, including females, may identify strongly with aspects of ISIL’s narrative—including governance under a particular vision of Islamic law, the re-establishment of the caliphate, the purported obligation upon Muslims to emigrate once it is formed, and the defense of Sunni Muslims against the Syrian regime’s persecution. These elements of ISIL’s narrative do not resemble goals long prioritized by AQ via its English-language messaging. We judge ISIL’s self-purported success as a functioning and viable state responding to US-led coalition attacks helps legitimize—to some individuals—its use of terrorist tactics to defend itself against perceived Western aggression.

(U//LES) The volume of ISIL-related SARs increased sharply in the second half of 2014, according to queries of state, local, and federal holdings nationally. Chronologically, this uptick corresponds with ISIL’s military successes, self-declared re-establishment of a caliphate, and increased English-language messaging—along with increased media coverage of these exploits. Any single incident of suspicious activity, in isolation, may constitute constitutionally protected activity and does not necessarily indicate an intent to mobilize to violence or provide material support to ISIL. Nevertheless, as a body of reporting showing a trend, we judge the increase in SARs signifies a penetration of ISIL’s messaging into the Homeland.

(U//LES) Several incidents related to ISIL graffiti, symbols, or ISIL-related paraphernalia—including clothing, patches, and flags––were reported to law enforcement agencies. Additional examples of graffiti, in Arabic and English, stickers with ISIL emblems, and similar imagery have been reported in the United States. A group was arrested in France in November 2014 for selling ISIL paraphernalia to US-based individuals and other customers, according to open source reporting.