The following document was originally released by the Public Employees for Environmental Responsibility.  For more information on the document, see our article on the subject. 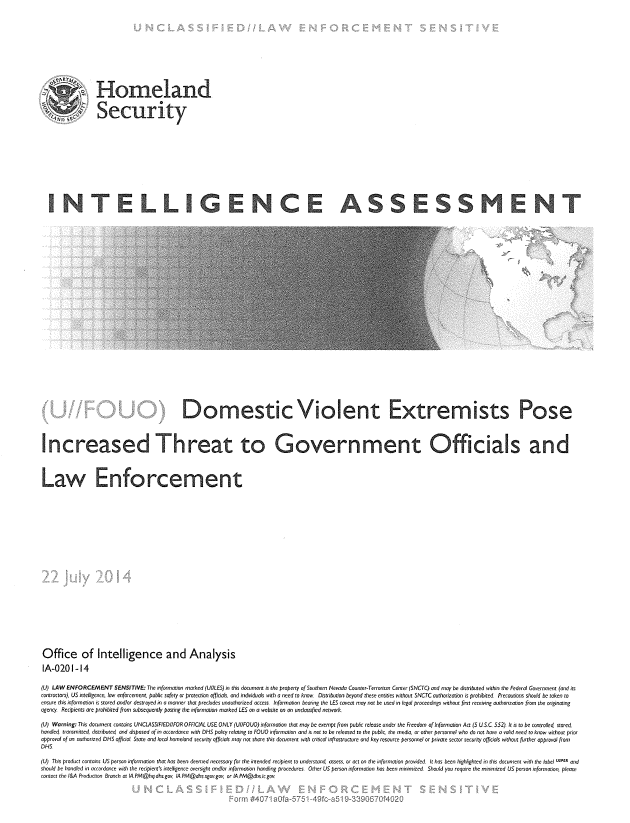 (U//FOUO) After years of only sporadic violence from violent domestic extremists motivated by anti-government ideologies, I&A has seen a spike within the past year in violence committed by militia extremists and lone offenders who hold violent anti-government beliefs. These groups and individuals recognize government authority but facilitate or engage in acts of violence due to their perception that the United States Government is tyrannical and oppressive, coupled to their belief that the government needs to be violently resisted or overthrown. Historically, spikes in violence have followed high-profile confrontations involving the United States Government, such as Ruby Ridge and Waco. The April 2014 Bunkerville, Nevada standoff likely represents a similar event that could inspire further violence.

(U//FOUO) This assessment examines the common themes and targets of these attacks and assesses the potential for increased violence that may follow the Bunkerville standoff.

(U//LES) I&A assesses that the perceived victory by militia extremists in a show of force against the Department of Interior’s Bureau of Land Management (BLM) in Nevada in April will likely inspire additional anti-government violence over the next year.

(UI/FOUO) I&A also assesses that the recent murders of two Las Vegas police officers is the latest and most severe incident in a growing trend of anti-government violence compared to the previous four years and inspired by perceived government overreach and oppression.

(UI/LES) I&A assesses that the belief among militia extremists that their threats and show of force against the BLM during the April Bunkerville standoff was a defining victory over government oppression is galvanizing some individuals-particularly militia extremists and violent lone offenders-to actively confront law enforcement officials, increasing the likelihood of violence. Additionally, this perceived success likely will embolden other militia extremists and like-minded lone offenders to attempt to replicate these confrontational tactics and force future armed standoffs with law enforcement and government officials during 2014. At least three incidents in 2014 appear to have a connection to the events in Bunkerville based on open source and law enforcement reporting.

(U//FOUO) I&A assesses the spike in anti-government attacks and plots since November 2013 is a departure from the random and sporadic nature of domestic extremist violence. These violent incidents are motivated by the perception of government actions (or lack of action) addressing political issues such as gun control, land-use, property, and other activities as interfering with their individual rights and as oppressive measures that warrant violent reprisal against US government entities and law enforcement, according to a body of open source reporting. These are common themes cited by attackers, but the specific motivations that drive any instance of anti-government violence vary due to the disparate beliefs and motivations of the individuals involved.