The following bulletin was originally published by the website Just the News. 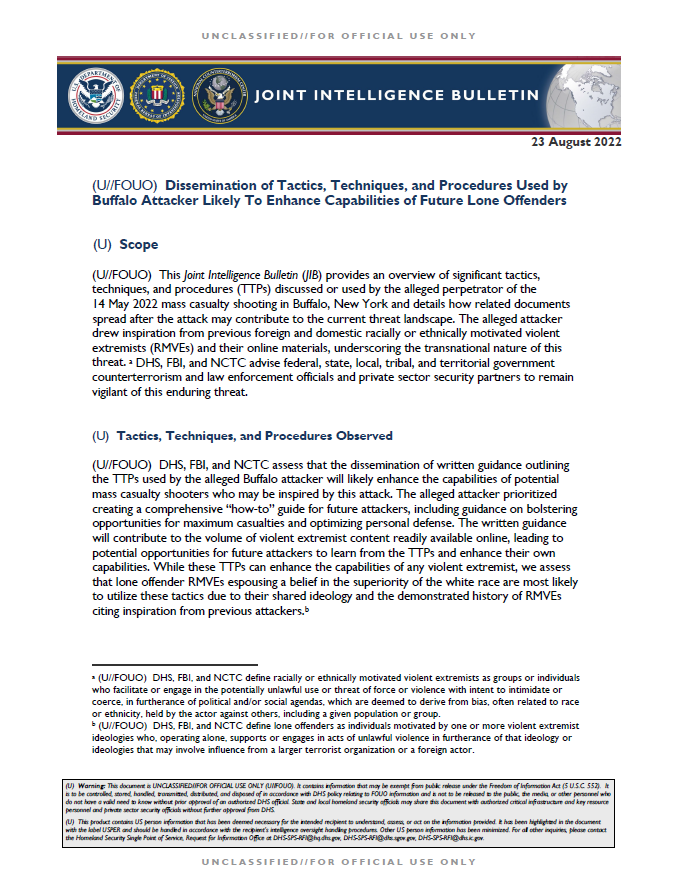 (U//FOUO) This Joint Intelligence Bulletin (JIB) provides an overview of significant tactics, techniques, and procedures (TTPs) discussed or used by the alleged perpetrator of the 14 May 2022 mass casualty shooting in Buffalo, New York and details how related documents spread after the attack may contribute to the current threat landscape. The alleged attacker drew inspiration from previous foreign and domestic racially or ethnically motivated violent extremists (RMVEs) and their online materials, underscoring the transnational nature of this threat. DHS, FBI, and NCTC advise federal, state, local, tribal, and territorial government counterterrorism and law enforcement officials and private sector security partners to remain vigilant of this enduring threat.

(U) Tactics, Techniques, and Procedures Observed

(U//FOUO) DHS, FBI, and NCTC assess that the dissemination of written guidance outlining the TTPs used by the alleged Buffalo attacker will likely enhance the capabilities of potential mass casualty shooters who may be inspired by this attack. The alleged attacker prioritized creating a comprehensive “how-to” guide for future attackers, including guidance on bolstering opportunities for maximum casualties and optimizing personal defense. The written guidance will contribute to the volume of violent extremist content readily available online, leading to potential opportunities for future attackers to learn from the TTPs and enhance their own capabilities. While these TTPs can enhance the capabilities of any violent extremist, we assess that lone offender RMVEs espousing a belief in the superiority of the white race are most likely to utilize these tactics due to their shared ideology and the demonstrated history of RMVEs citing inspiration from previous attackers.

• (U//FOUO) The alleged attacker extensively documented his pre-attack planning process and TTPs in a 180-page manifesto and 672-page online diary intended to serve as a manual for future attackers, according to DHS and press reporting. The diary demonstrates his interest in extensive pre-operational planning and details his ideological motivations, target selection, gear and weapons choices, reconnaissance, and calls to action designed to inspire additional attacks. The accompanying manifesto includes a structured breakdown of all weapons, ammunitions, and gear considered in
the planning of the attack and a cost-benefit analysis of using select materials. The alleged attacker also upgraded his cell phone data service prior to the attack, believing this would improve the quality and ease of livestreaming the attack. The alleged attacker invited several individuals to his private online diary minutes prior to the attack to assist in the dissemination of his materials.

• (U//FOUO) Approximately 100 pages of the alleged attacker’s manifesto provide recommendations on specific TTPs intended to maximize casualties. The document details his pre-attack training with gear, modification of weapons, and extensive target selection research. For example, several pages describe how to make a homemade magazine coupler and modify an AR-15-style rifle to accept magazines that can hold 30 rounds of ammunition to circumvent some state laws that limit possession of high-capacity magazines, pointing the reader to flea markets and online sellers to obtain materials for additional modifications, which violate some state laws.

• (U//FOUO) The alleged attacker’s target selection process is discussed at several points, detailing the use of publicly available information to determine which areas of New York state were more populated by African Americans and which physical locations were soft targets with limited security measures. The documents also detail the alleged attacker’s use of physical reconnaissance to determine optimal attack paths and possible locations for secondary attacks to maximize casualties.

• (U//FOUO) The alleged attacker modified and employed various materials and tactics intended to optimize his personal safety and defense. The manifesto and diary detail his choices of body armor and gear modifications, including details like basic clothing
choices. For example, he opted for lighter body armor to increase his mobility because he believed armed shooters would most likely encounter police officers armed with pistols before Special Weapons and Tactics (SWAT) personnel, who are more heavily armed. The documents also highlight the
focus on targeting security personnel at the onset of an attack and discuss conducting attacks in areas with strict local gun laws to decrease resistance from armed civilians. The documents also suggest conducting on-location scouting prior to an attack to identify security measures to select
appropriate ammunition and weapons for defeating the observed obstacles.