The following bulletin was obtained from the public website of a local security association. 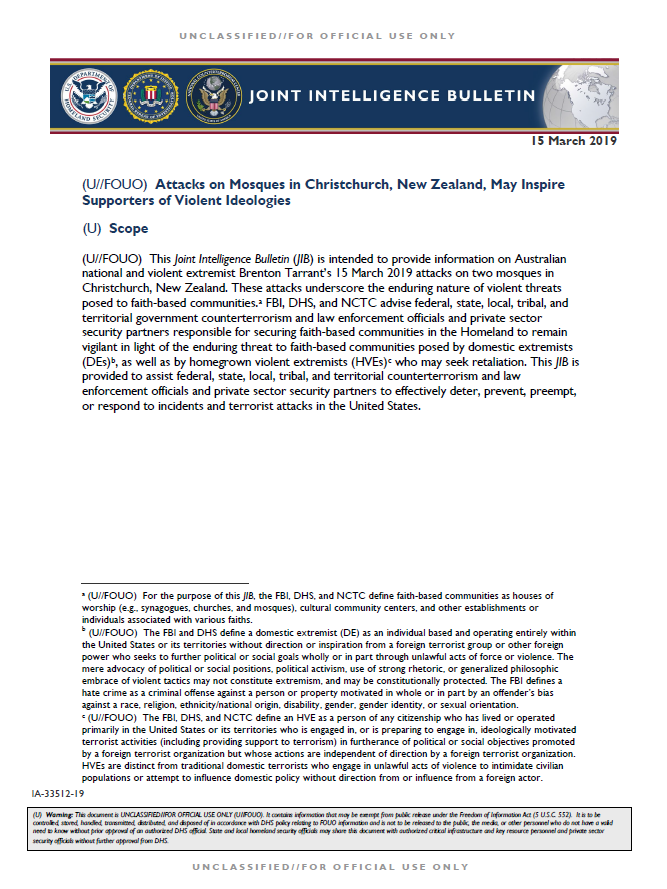 Attacks on Mosques in Christchurch, New Zealand, May Inspire Supporters of Violent Ideologies

(U//FOUO) On 15 March 2019, New Zealand police arrested an Australian national who appeared to be inspired by a white supremacist ideology and who allegedly conducted a shooting attack on two mosques in Christchurch, New Zealand. This attack highlights the enduring threat of violence posed to faith-based communities. There are currently 49 victims deceased, and 20 others are listed as being in critical condition following the attack.

» (U//FOUO) On 15 March 2019, at about 1:40 PM local time, Australian national Brenton Tarrant used firearms to attack the Masjid Al Noor Mosque in the city of Christchurch, New Zealand, before conducting a similar shooting attack at the Linwood Masjid Mosque, approximately four miles away. Tarrant drove to the attack sites and livestreamed a video of the attack. Police also discovered improvised explosive devices in a vehicle connected with the attack. Tarrant is currently the only known perpetrator; however, investigation of his movements and associates continues.

» (U//FOUO) Tarrant disseminated a manifesto prior to the shooting which detailed his concerns of perceived “white genocide.” The manifesto contains a wide range of anti-immigrant and anti-Muslim views. One reason listed as to why he carried out the attack was “to create conflict…within the United States on the ownership of firearms in order to further the social, cultural, political, and racial divide within the United states [sic].”

» (U//FOUO) Tarrant claimed to have been planning the attack for two years and recently relocated to New Zealand to live temporarily while he “planned and trained.” He claimed to have chosen to conduct his attack in Christchurch three months prior to show such attacks could happen anywhere.

(U) Mosque Attacks Could Incite Like-Minded and Retaliatory Attacks

(U//FOUO) We are concerned online sharing of Tarrant’s livestreamed footage could amplify viewer reaction to the violent attack and possibly incite similar attacks by those adhering to violent extremist ideologies in the United States and abroad, as well as retaliatory attacks from HVEs and individuals otherwise affiliated with foreign terrorist organizations. Tarrant appeared to have been influenced by prior attacks by violent extremists in the United States and other countries, and we remain concerned that US-based DEs of similar ideologies could become inspired by this attack. Although most HVEs generally do not mobilize to violence in response to specific events and instead are usually influenced by a confluence of sociopolitical, ideological, and personal factors, exceptions may occur and we remain concerned for the potential of retaliatory attacks by some HVEs, as we have already seen calls for attacks by violent extremists online.

» (U//FOUO) An examination of online jihadist media following the mosque attacks indicates various al-Qa‘ida and ISIS supporters are posting attack images to express outrage and are calling upon all Muslims to respond to the New Zealand attacks by launching their own near-term attacks in retaliation.