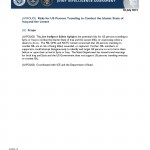 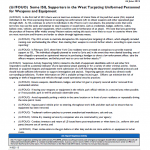 In the first half of 2015 there were at least two instances of Islamic State of Iraq and the Levant (ISIL) inspired individuals in the West expressing interest in targeting law enforcement (LE) to obtain weapons and other specialized gear through theft. As ISIL continues to exhort its individuals in the West to carry out attacks, the potential exists that some terrorists may use this tactic and attempt to steal weapons or issued items, such as credentials, badges, uniforms, radios, ballistic vests, vehicles, and other equipment, which could be used in furtherance of an attack. We note that laws governing the purchase of firearms differ widely among Western nations making this tactic more likely to occur in countries where laws are most restrictive and firearms are harder to obtain through legitimate means.

The Nation has more than 100,000 dams. Of this number, approximately 82,000 are listed in the National Inventory of Dams (NID), which generally includes dams greater than 25 feet in height or reservoirs having more than 50 acre-feet in storage capacity. In the NID, the downstream hazard potential (e.g., the amount of risk or damage a dam can pose because of failure or negligent operation) is classified as high, significant, or low. In the current NID database, approximately 12,000 dams are classified as high hazard potential from a dam safety perspective. However, only a very small percentage of high-hazard dams represent a potential for causing mass casualties.

Kevin William Harpham was arrested in Colville, Washington by federal law enforcement on 9 March 2011 in connection with the improvised explosive device (IED) found along the route of a Martin Luther King, Jr. Day “MLK Unity March” in Spokane, Washington on 17 January 2011. On 17 January 2011, three sanitation workers in Spokane, Washington discovered a Swiss Army backpack containing an RCIED immediately prior to the Martin Luther King, Jr. Day “MLK Unity March.” The device was placed along the parade route. Based on preliminary forensic examinations, we assess with medium confidenceii that the IED was designed to fire directional fragmentation similar to a single shot shotgun with buckshot or cannon with a grapeshot round. We likewise assess that the device was viable and could have caused personal injury or death.

Terrorists remain interested in exploiting postal and commercial shipping companies to conduct or support attacks in the United States. Publicity surrounding the more than 40,000 incidents involving unknown or suspicious substances related to the U.S. Mail since 2001 likely reinforces violent extremists’ belief that the postal sector is a useful mechanism for conducting an attack, as it demonstrates that mail containing potentially harmful substances can be delivered without arousing suspicion or being discovered until the recipient opens the letter or package.

Since 9/11, the U.S. Government has engaged in a multibillion-dollar effort to construct a domestic intelligence network for the ostensible purpose of combating terrorism, criminal activity and violent extremism. One of the central components of this system is the network of “fusion centers” that have sprung up around the country over the last several years. These entities integrate local law enforcement with a state’s police force, Department of Justice, or Office of Emergency Management and are designed to facilitate law enforcement intelligence activities throughout the jurisdiction, providing federal authorities access to local information and databases, while simultaneously allowing federal agencies to disseminate classified intelligence materials to local authorities. There are almost always federal representatives present in local fusion centers and Secretary Napolitano has recently testified that DHS is “committed to having an officer in each fusion center.” Most fusion centers also work with representatives of the private sector, particularly those industries related to so-called “critical infrastructure and key resources.”

A nearly complete list of the actual physical locations, phone numbers, and email addresses of fusion centers around the United States.

As the President said in his State of the Union address, in the face of violent extremism, “we are responding with the strength of our communities.” A vast majority of people in every American community resoundingly reject violence, and this certainly includes the violent, al-Qaeda-style ideology that claims to launch attacks in the name of their widely rejected version of Islam. We must use these facts as a tool against the threat of homegrown violent extremism. In conjunction with these communities and with the Department of Justice and the Program Manager for the Information Sharing Environment, we have published guidance on best practices for community partnerships, which has been distributed to local law enforcement across the country. DHS also holds regular regional meetings – which include state and local law enforcement, state and local governments, and community organizations – in Chicago, Detroit, Los Angeles, and Minneapolis. These regional meetings have enabled participants to provide and receive feedback on successful community-oriented policing and other programs aimed at preventing violence.

This Joint Special Event Threat Assessment (JSETA) addresses potential threats to the National Football League (NFL)USPER Super Bowl XLV, which will be played on 6 February 2011 at Cowboys Stadium in Arlington, Texas. It focuses on potential threats to the game—and to various NFL-sanctioned events scheduled for the Dallas/Ft. Worth Metroplex-area during the 12 days prior to the game—from international and domestic terrorists, cyber actors, criminals, and foreign intelligence services.

The NOC will use Internet-based platforms that provide a variety of ways to follow activity related to monitoring publicly available online forums, blogs, public websites, and message boards. Through the use of publicly available search engines and content aggregators the NOC will monitor activities on the social media sites listed in Appendix A for information that the NOC can use to provide situational awareness and establish a common operating picture. Appendix A is a current list of sites that the NOC will use as a starting point under this Initiative.

You May Be a Terrorist

Did you know? You might be a terrorist. You probably didn’t know that. In fact, you probably don’t think about terrorism much. However, there are a large amount of people at the Department of Homeland Security, the Federal Bureau of Investigation, and a variety of law enforcement agencies all around the country that do think about it, a lot. It is, in many respects, their job to think about it. Yet, the ever-expanding search for potential activities and indicators of terrorist activity has become emblematic of the overreaching and obsessive nature of efforts to combat terrorism in the United States. Departing more and more from rational depictions of truly suspicious activity, the criteria listed in law enforcement reports as indicating criminal or terrorist activity have become so expansive as to include many ubiquitous, everyday activities. The following list demonstrates the extent of “suspicious activity reporting” by listing a number of criteria which are said to indicate criminal or terrorist activity.

Safe Mail Handling Procedures. It is important that every employee handling or receiving mail can identify a suspicious letter or parcel. Although occurrences are extremely rare, it is essential to know what to do when suspicious mail is received. All staff must remain alert for the tell-tale signs of potentially dangerous mail and packages.

Terrorists could use hydrogen peroxide and organic fuel mixtures (HPOMs), made by mixing concentrated hydrogen peroxide with a variety of organic fuels, in an attack against the United States. The viability, performance, and sensitivity of these explosives vary and are based on a number of factors including the fuel chosen, the ratio of peroxide to fuel, and the concentration of peroxide used. Peroxide can be concentrated from lower percentages by simple evaporation through heating, and it is readily available in a variety of stores. The organic fuels used in these mixtures include common products such as cumin, black pepper, flour, sugar, honey, acetone, nitromethane, ethanol (grain alcohol) or ground coffee. HPOMs are extremely sensitive to impact, friction, static/spark, and heat and in large quantities can self-heat and ignite if in sunlight or a hot room.

FOUO Department of Homeland Security Introduction to Explosives from April 2008.

(U//FOUO) DHS and the FBI assess that, given the current evolving and diversifying Homeland threat environment, recent incidents involving small arms operations here in the United States and abroad demonstrate the need for continued vigilance and awareness. Small arms operations could be employed through a range of tactics from a lone shooter—as illustrated by the 1 September incident in Silver Spring, Maryland at the headquarters of a U.S. cable network—to a small-unit assault operation.

The purpose of the Agreement is to set forth terms by which DHS and DoD will provide personnel, equipment, and facilities in order to increase interdepartmental collaboration in strategic planning for the Nation’s cybersecurity, mutual support for cybersecurity capabilities development, and synchronization of current operational cybersecurity mission activities. Implementing this Agreement will focus national cybersecurity efforts, increasing the overall capacity and capability of both DHS’s homeland security and DoD’s national security missions, while providing integral protection for privacy, civil rights, and civil liberties.

DHS video designed to raise the level of awareness for retail and shopping center employees by highlighting the indicators of suspicious activity, this video provides information to help employees identify and report suspicious activities and threats in a timely manner.

The National Cybersecurity and Communications Integration Center (NCCIC) and US-CERT are aware of malicious e-mails received on September 9, 2010, by public and private sector stakeholders. Organizations should warn users to avoid opening suspicious e-mails and monitor activity to the following URL:

(U//FOUO) At approximately 1830 hours on 1 May 2010, a sports utility vehicle (SUV) laden with a destructive device was observed parked at 45th Street and Broadway in Times Square, New York City. Eyewitness reports described the vehicle as smoking, and popping noises were heard emanating from it but no detonation occurred. Law enforcement investigation of the SUV revealed the following: three 20lb propane tanks; two five gallon gasoline canisters; one container containing a black powder material; one large, sealed, vault-like container with visible wires connecting to two analog alarm clocks; and one fuse.

* James W. von Brunn, a Holocaust denier reported to be in his late 80s, walked into the Holocaust Museum in Washington, DC and shot a security guard with a .22 caliber rifle on 10 June 2009
* In 1981 von Brunn served six years in prison for attempting to kidnap members of the Federal Reserve board due to anger over high interest rates
* Von Brunn has been charged with murder and killing in the course of possessing a firearm at a federal facility, both capital offenses under federal law
* The Department of Homeland Security has categorized the shooting as a criminal incident and said it does not appear to have a connection to terrorism. The attack is being investigated as a hate crime