The following Roll Call Release was obtained from the website of the National Domestic Preparedness Coalition. 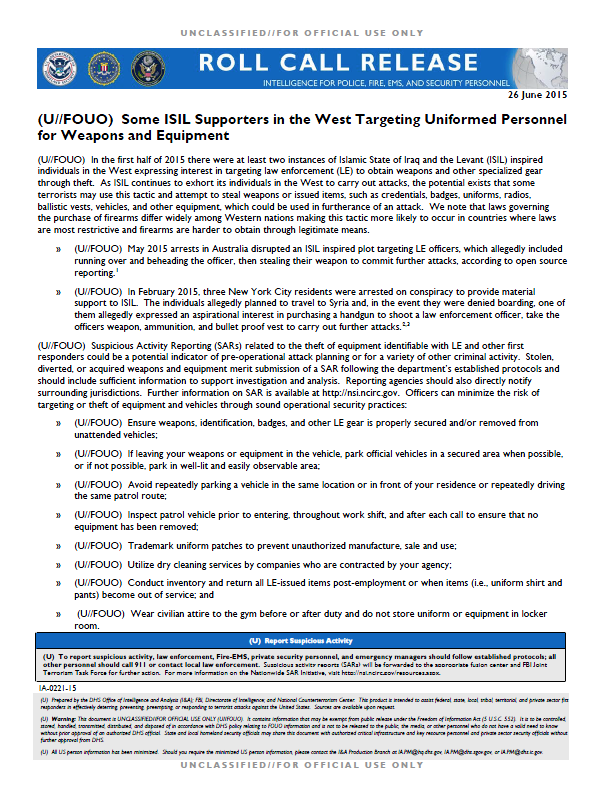 (U//FOUO) In the first half of 2015 there were at least two instances of Islamic State of Iraq and the Levant (ISIL) inspired individuals in the West expressing interest in targeting law enforcement (LE) to obtain weapons and other specialized gear through theft. As ISIL continues to exhort its individuals in the West to carry out attacks, the potential exists that some terrorists may use this tactic and attempt to steal weapons or issued items, such as credentials, badges, uniforms, radios, ballistic vests, vehicles, and other equipment, which could be used in furtherance of an attack. We note that laws governing the purchase of firearms differ widely among Western nations making this tactic more likely to occur in countries where laws are most restrictive and firearms are harder to obtain through legitimate means.

» (U//FOUO) May 2015 arrests in Australia disrupted an ISIL inspired plot targeting LE officers, which allegedly included running over and beheading the officer, then stealing their weapon to commit further attacks, according to open source reporting.
» (U//FOUO) In February 2015, three New York City residents were arrested on conspiracy to provide material support to ISIL. The individuals allegedly planned to travel to Syria and, in the event they were denied boarding, one of them allegedly expressed an aspirational interest in purchasing a handgun to shoot a law enforcement officer, take the officers weapon, ammunition, and bullet proof vest to carry out further attacks.

(U//FOUO) Suspicious Activity Reporting (SARs) related to the theft of equipment identifiable with LE and other first responders could be a potential indicator of pre-operational attack planning or for a variety of other criminal activity. Stolen, diverted, or acquired weapons and equipment merit submission of a SAR following the department’s established protocols and should include sufficient information to support investigation and analysis. Reporting agencies should also directly notify surrounding jurisdictions. Further information on SAR is available at http://nsi.ncirc.gov. Officers can minimize the risk of targeting or theft of equipment and vehicles through sound operational security practices:

» (U//FOUO) Ensure weapons, identification, badges, and other LE gear is properly secured and/or removed from unattended vehicles;
» (U//FOUO) If leaving your weapons or equipment in the vehicle, park official vehicles in a secured area when possible, or if not possible, park in well-lit and easily observable area;
» (U//FOUO) Avoid repeatedly parking a vehicle in the same location or in front of your residence or repeatedly driving the same patrol route;
» (U//FOUO) Inspect patrol vehicle prior to entering, throughout work shift, and after each call to ensure that no equipment has been removed;
» (U//FOUO) Trademark uniform patches to prevent unauthorized manufacture, sale and use;
» (U//FOUO) Utilize dry cleaning services by companies who are contracted by your agency;
» (U//FOUO) Conduct inventory and return all LE-issued items post-employment or when items (i.e., uniform shirt and pants) become out of service; and
» (U//FOUO) Wear civilian attire to the gym before or after duty and do not store uniform or equipment in locker room.