The following document was obtained from the website of the Community Clinic Association of Los Angeles County. 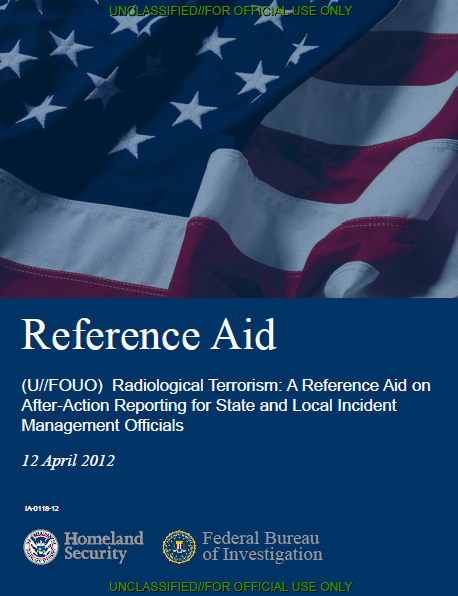 (U//FOUO) This Reference Aid was jointly produced by DHS and the FBI to assist in the acquisition of detailed information in the aftermath of a successful or attempted radiological terrorism incident that would be of interest to the national law enforcement and emergency response communities. It is intended to help state, local, tribal, and territorial agencies and private sector entities deter, prevent, preempt, or respond to terrorist attacks against the United States.

(U//FOUO) Incident response to a radiological terrorist attack would involve, but not necessarily be limited to, police, fire, hazardous materials, public health, and radiological and nuclear detection emergency management teams and offices. Incident response also would require establishing an incident command system, such as a unified command structure based on the National Incident Management System.

(U//FOUO) This Reference Aid focuses narrowly on those responders who complete after-action reports following incidents described in this Reference Aid. The information collected may provide broader situational awareness after an incident has occurred, support threat analysis of potential follow-on incidents, assist in identifying perpetrators, and facilitate the allocation of consequence-management resources.

(U//FOUO) Warning: Radiological dispersal devices (RDDs) or radiological exposure devices (REDs) may be hazardous, even at a distance. Individuals should not endanger themselves by approaching a dangerously radioactive source or device in an attempt to collect this information. State, local, tribal, territorial, and private sector medical officials will normally be involved in safety evaluations following such incidents.

(U) Incident Description and Details

(U//FOUO) For any incident suspected or confirmed of being a malicious attempt to expose or contaminate persons, property, infrastructure, or natural resources with radioactive materials, information of interest includes:

— (U//FOUO) Time and place of the incident—include street address and geographic coordinates, such as latitude and longitude or military grid reference system, if available.

— (U//FOUO) Types of buildings, activities, and infrastructure at the site. Describe what was occurring at the incident site immediately prior to the incident, including any special events taking place. Estimate how many people were present at the start of the incident.

— (U//FOUO) Information about persons fleeing the scene immediately prior to the incident.

— (U//FOUO) Details regarding how radioactive materials were dispersed or intended to be dispersed, to include explosive, manual, or other means of dispersal.

— (U//FOUO) Indications or evidence that other or secondary devices exist.

— (U//FOUO) Evidence of coordination or pre-planning between multiple persons.

— (U//FOUO) Indications or evidence that perpetrators were aware of or tried to circumvent security measures.

— (U//FOUO) Indications or evidence that the perpetrators took measures to confine people in proximity to the radiological device.

— (U//FOUO) Distractions, diversions, or other tactics used to transport or place a device at the incident scene.

— (U//FOUO) Proximity, if known, of the incident site to intense radiation sources, such as those that might be found at hospitals, universities, or industrial sites using radiation devices.

— (U//FOUO) Status of the climate control system, windows, and doors—for incidents that occurred inside a building or vehicle—before and during the incident, to include any evidence of tampering or sabotage.

— (U//FOUO) Proximity of the incident site to critical infrastructure, including potentially symbolic targets or high-population areas.

— (U//FOUO) If the incident involved an attempt to create an RDD or RED by damaging a piece of equipment containing radiological material at its place of installation:

— (U//FOUO) If the incident involved an attempt to create an RDD or RED by breaching the packaging and containment measures of radiological material being transported in a vehicle:

— (U//FOUO) Aircraft, model aircraft, or balloons overflying the scene before, during, or after the incident, particularly if the activity was unusual or could be linked to reconnaissance of the incident site or dispersal of radiological materials. Describe the overflight activity and any suspicions it may have raised.

— (U//FOUO) Prior suspicious incidents at the same location, particularly descriptions of possible preoperational activity such as reconnaissance, surveillance, recent theft of radiological materials, or unusual photographing of infrastructure, facilities, or personnel.