The following document was obtained from the website of the Stadium Managers Association.  Products from the Department of Homeland Security, Office of Cyber and Infrastructure Analysis are not marked with any distribution restrictions, though they are not released publicly. 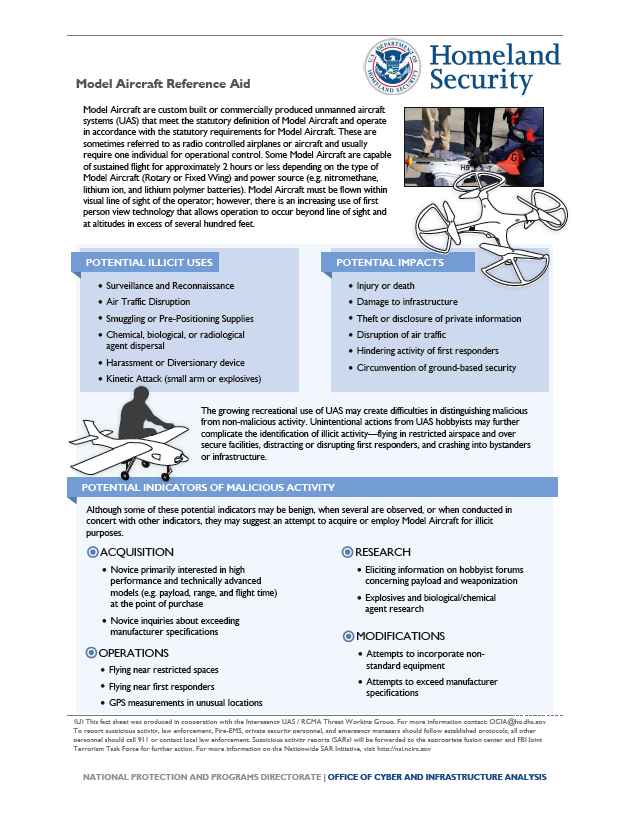 Model Aircraft are custom built or commercially produced unmanned aircraft systems (UAS) that meet the statutory definition of Model Aircraft and operate in accordance with the statutory requirements for Model Aircraft. These are sometimes referred to as radio controlled airplanes or aircraft and usually require one individual for operational control. Some Model Aircraft are capable of sustained flight for approximately 2 hours or less depending on the type of Model Aircraft (Rotary or Fixed Wing) and power source (e.g. nitromethane, lithium ion, and lithium polymer batteries). Model Aircraft must be flown within visual line of sight of the operator; however, there is an increasing use of first person view technology that allows operation to occur beyond line of sight and at altitudes in excess of several hundred feet.

Although some of these potential indicators may be benign, when several are observed, or when conducted in concert with other indicators, they may suggest an attempt to acquire or employ Model Aircraft for illicit purposes.