The following bulletin was obtained from the website of a county government. 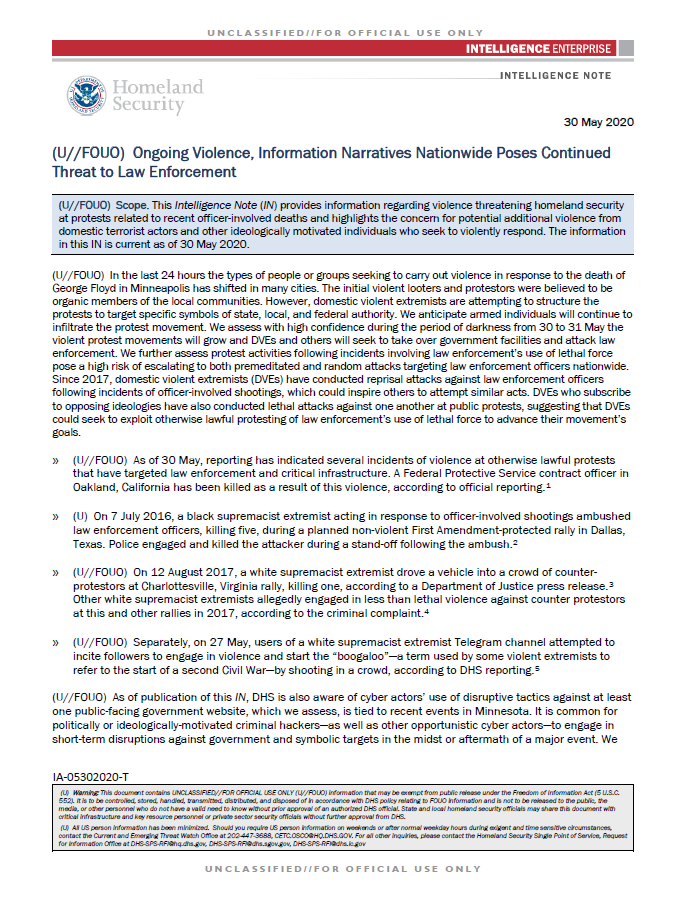 (U//FOUO) In the last 24 hours the types of people or groups seeking to carry out violence in response to the death of George Floyd in Minneapolis has shifted in many cities. The initial violent looters and protestors were believed to be organic members of the local communities. However, domestic violent extremists are attempting to structure the protests to target specific symbols of state, local, and federal authority. We anticipate armed individuals will continue to infiltrate the protest movement. We assess with high confidence during the period of darkness from 30 to 31 May the violent protest movements will grow and DVEs and others will seek to take over government facilities and attack law enforcement. We further assess protest activities following incidents involving law enforcement’s use of lethal force pose a high risk of escalating to both premeditated and random attacks targeting law enforcement officers nationwide. Since 2017, domestic violent extremists (DVEs) have conducted reprisal attacks against law enforcement officers following incidents of officer-involved shootings, which could inspire others to attempt similar acts. DVEs who subscribe to opposing ideologies have also conducted lethal attacks against one another at public protests, suggesting that DVEs could seek to exploit otherwise lawful protesting of law enforcement’s use of lethal force to advance their movement’s goals.

» (U//FOUO) As of 30 May, reporting has indicated several incidents of violence at otherwise lawful protests that have targeted law enforcement and critical infrastructure. A Federal Protective Service contract officer in Oakland, California has been killed as a result of this violence, according to official reporting.

» (U) On 7 July 2016, a black supremacist extremist acting in response to officer-involved shootings ambushed law enforcement officers, killing five, during a planned non-violent First Amendment-protected rally in Dallas, Texas. Police engaged and killed the attacker during a stand-off following the ambush.

» (U//FOUO) On 12 August 2017, a white supremacist extremist drove a vehicle into a crowd of counterprotestors at Charlottesville, Virginia rally, killing one, according to a Department of Justice press release.

Other white supremacist extremists allegedly engaged in less than lethal violence against counter protestors at this and other rallies in 2017, according to the criminal complaint.

» (U//FOUO) Separately, on 27 May, users of a white supremacist extremist Telegram channel attempted to incite followers to engage in violence and start the “boogaloo”—a term used by some violent extremists to refer to the start of a second Civil War—by shooting in a crowd, according to DHS reporting.

(U//FOUO) As of publication of this IN, DHS is also aware of cyber actors’ use of disruptive tactics against at least one public-facing government website, which we assess, is tied to recent events in Minnesota. It is common for politically or ideologically-motivated criminal hackers—as well as other opportunistic cyber actors—to engage in short-term disruptions against government and symbolic targets in the midst or aftermath of a major event. We expect to see more of these types of cyber operations against federal, state, and local government networks, which frequently use common tactics and known vulnerabilities to target these networks.

» (U) Unidentified cyber actors on 29 May 2020 conducted a distributed denial of service (DDoS) attack against the governmental network of Minnesota state. The attack caused a temporary disruption in services on its public-facing website for just over an hour and is currently under active investigation to determine its attribution. It was confirmed that during this attack, no data was compromised and there was minimal impact to operations, according to CISA and DHS reporting.

(U//FOUO) Foreign adversaries, such as Russia and China, have used state-controlled media to discuss recent events in Minnesota and the subsequent response, including First Amendment protected protest activity. Beyond overt efforts to depict these events—depictions that paint the US government or the socio-political cohesion of the Unites States in a negative light— we assess covert proxies and social media accounts are doing the same. Russian influence actors, in particular, have a history of using online tools to covertly amplify content concerning protest activity in the United States, including rhetoric that may seek to incite violence at such events.

» (U//FOUO) As of 2018, Russian influence actors allegedly planned to attempt to incite unrest and violence in the United States by targeting the African American community using its social media trolls to spread false and incendiary stories. Russian influence actors also planned to recruit radical movement members to participate in civil disobedience actions, according to 2019 press reporting.