The following bulletin was first obtained and published by ABC News. 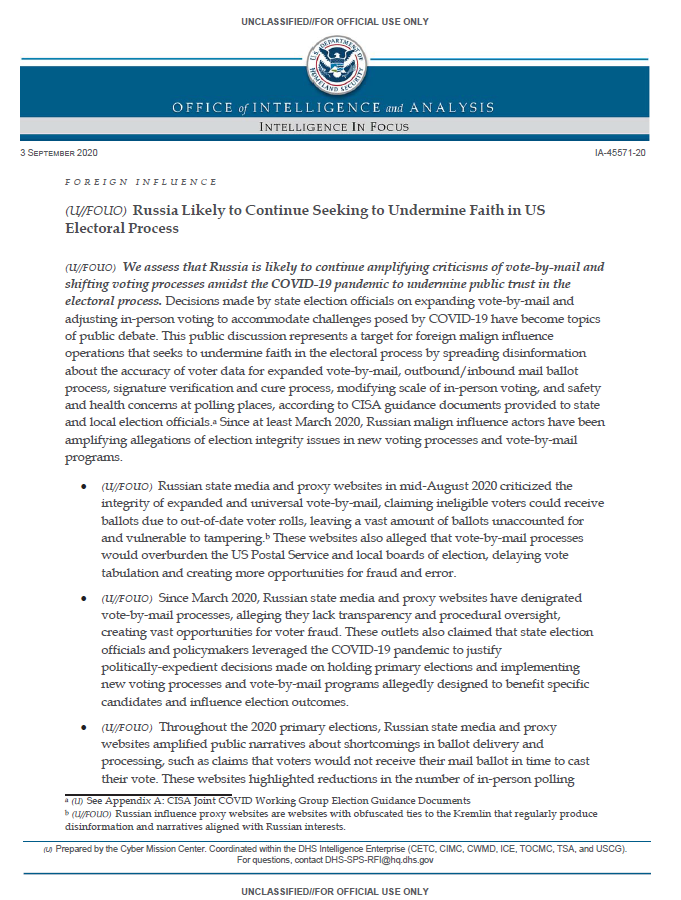 (U//FOUO) We assess that Russia is likely to continue amplifying criticisms of vote-by-mail and shifting voting processes amidst the COVID-19 pandemic to undermine public trust in the electoral process. Decisions made by state election officials on expanding vote-by-mail and adjusting in-person voting to accommodate challenges posed by COVID-19 have become topics of public debate. This public discussion represents a target for foreign malign influence operations that seeks to undermine faith in the electoral process by spreading disinformation about the accuracy of voter data for expanded vote-by-mail, outbound/inbound mail ballot process, signature verification and cure process, modifying scale of in-person voting, and safety and health concerns at polling places, according to CISA guidance documents provided to state and local election officials. Since at least March 2020, Russian malign influence actors have been amplifying allegations of election integrity issues in new voting processes and vote-by-mail programs.

(U//FOUO) Russian state media and proxy websites in mid-August 2020 criticized the integrity of expanded and universal vote-by-mail, claiming ineligible voters could receive ballots due to out-of-date voter rolls, leaving a vast amount of ballots unaccounted for and vulnerable to tampering.b These websites also alleged that vote-by-mail processes would overburden the US Postal Service and local boards of election, delaying vote tabulation and creating more opportunities for fraud and error.

(U//FOUO) Throughout the 2020 primary elections, Russian state media and proxy websites amplified public narratives about shortcomings in ballot delivery and processing, such as claims that voters would not receive their mail ballot in time to cast their vote. These websites highlighted reductions in the number of in-person polling places in large cities due to the pandemic and the long lines this caused, claiming this
would disproportionately suppress voting among African-Americans and expose them to the spread of COVID-19.

(U//FOUO) We assess that Russian state media, proxies, and Russian-controlled social media trolls are likely to promote allegations of corruption, system failure, and foreign malign interference to sow distrust in democratic institutions and election outcomes. We base this assessment on content analysis of narratives and themes promoted by Russian state media and proxy websites throughout the 2020 election cycle concerning system integrity issues and parallels with observed Russian troll activity leading up to the 2018 and 2016 elections.

(U//FOUO) Russia continues to spread disinformation in the United States designed to undermine American confidence in democratic processes and denigrate a perceived anti-Russia establishment, using efforts such as Russian-controlled internet trolls and other proxies, according to an ODNI press statement. In the Iowa Caucuses in February, Russian state media and proxy websites claimed that the contest was fixed in favor of establishment candidates and that technical difficulties with the caucusing mobile voting application led to ballot manipulation. These outlets continued this narrative into March 2020, claiming that the Democratic Party made a corrupt back-room deal to orchestrate the exit of establishment candidates to consolidate the vote behind former Vice President BidenUSPER in advance of the Super Tuesday primary elections.

(U) Russian malign influence actors during the 2018 US midterm election claimed they controlled the US voting systems to prompt election integrity concerns, according to press reporting. In the 2016 US presidential election, Russian social media trolls targeted specific communities and claimed the election was rigged by the establishment, encouraging these voters to stay at home or vote for third-party candidates in order to influence the election outcome, according to reports by firms with expertise in social media network analysis.