The following bulletin was originally obtained and published by CNN. 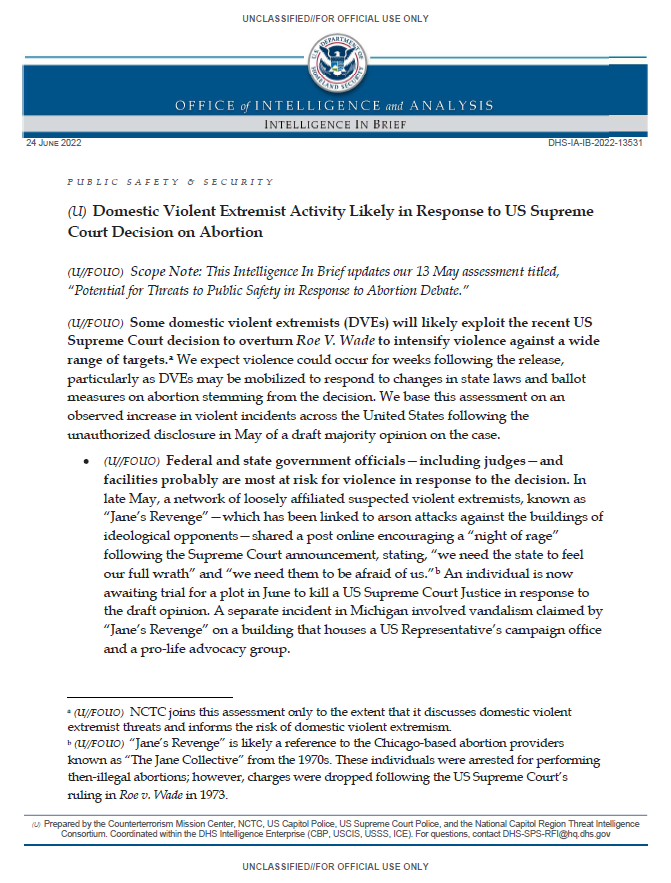 (U//FOUO) Some domestic violent extremists (DVEs) will likely exploit the recent US Supreme Court decision to overturn Roe V. Wade to intensify violence against a wide range of targets. We expect violence could occur for weeks following the release, particularly as DVEs may be mobilized to respond to changes in state laws and ballot measures on abortion stemming from the decision. We base this assessment on an observed increase in violent incidents across the United States following the unauthorized disclosure in May of a draft majority opinion on the case.

(U//FOUO) Federal and state government officials—including judges—and facilities probably are most at risk for violence in response to the decision. In late May, a network of loosely affiliated suspected violent extremists, known as “Jane’s Revenge”—which has been linked to arson attacks against the buildings of ideological opponents—shared a post online encouraging a “night of rage” following the Supreme Court announcement, stating, “we need the state to feel our full wrath” and “we need them to be afraid of us.” An individual is now awaiting trial for a plot in June to kill a US Supreme Court Justice in response to the draft opinion. A separate incident in Michigan involved vandalism claimed by “Jane’s Revenge” on a building that houses a US Representative’s campaign office and a pro-life advocacy group.