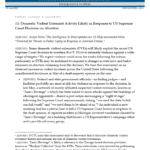 Some domestic violent extremists (DVEs) will likely exploit the recent US Supreme Court decision to overturn Roe V. Wade to intensify violence against a wide range of targets. We expect violence could occur for weeks following the release, particularly as DVEs may be mobilized to respond to changes in state laws and ballot measures on abortion stemming from the decision. We base this assessment on an observed increase in violent incidents across the United States following the unauthorized disclosure in May of a draft majority opinion on the case.

In one of the most frequently quoted passages of one of the most frequently cited First Amendment decisions, the Supreme Court declared that “the purpose of Congress … is not a basis for declaring [ ] legislation unconstitutional.” Noting several hazards of attempting to ascertain legislative motive, the Court in United States v O’Brien eschewed this endeavor in First Amendment cases, as well as in other constitutional adjudication.

In May 2009, Supreme Court Justice David Souter announced his intention to retire from the Supreme Court. Several weeks later, President Obama nominated Judge Sonia Sotomayor, who currently serves on the U.S. Court of Appeals for the Second Circuit, to fill his seat. To fulfill its constitutional “advice and consent” function, the Senate will consider Judge Sotomayor’s extensive record – compiled from years as a lawyer, prosecutor, district court judge, and appellate court judge – to better understand her legal approaches and judicial philosophy.