The following cyber strategy summary for the Department of Defense was released publicly by Secretary of Defense Ash Carter at Stanford University on April 23, 2015. 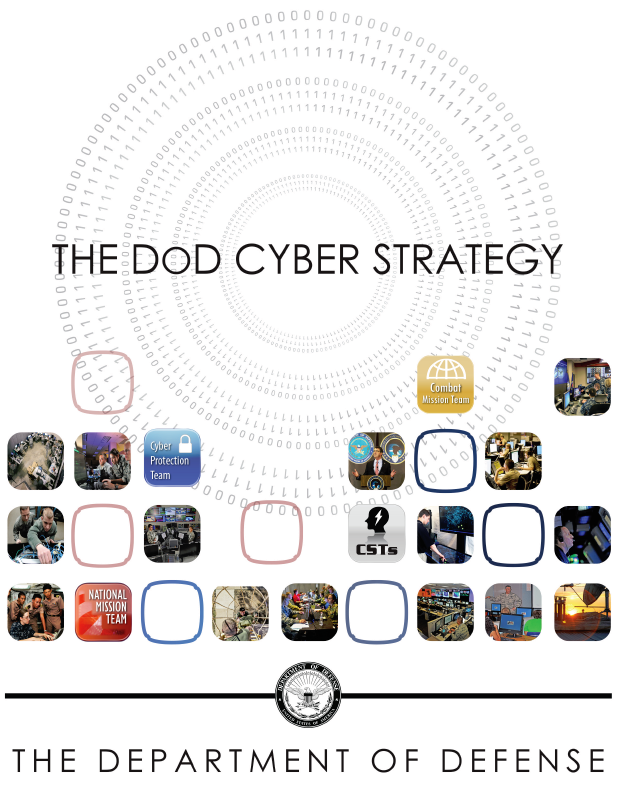 THE DEPARTMENT OF DEFENSE CYBER STRATEGY

In concert with other agencies, the United States’ Department of Defense (DoD) is responsible for defending the U.S. homeland and U.S. interests from attack, including attacks that may occur in cyberspace. In a manner consistent with U.S. and international law, the Department of Defense seeks to deter attacks and defend the United States against any adversary that seeks to harm U.S. national interests during times of peace, crisis, or conflict. To this end the Defense Department has developed capabilities for cyber operations and is integrating those capabilities into the full array of tools that the United States government uses to defend U.S. national interests, including diplomatic, informational, military, economic, financial, and law enforcement tools.

The May 2011 Department of Defense Strategy for Operating in Cyberspace guided the Defense Department’s cyber activities and operations in support of U.S. national interests over the last four years. This new strategy sets prioritized strategic goals and objectives for DoD’s cyber activities and missions to achieve over the next five years. It focuses on building capabilities for effective cybersecurity and cyber operations to defend DoD networks, systems, and information; defend the nation against cyberattacks of significant consequence; and support operational and contingency plans. This strategy builds on previous decisions regarding DoD’s Cyber Mission Force and cyber workforce development and provides new and specific guidance to mitigate anticipated risks and capture opportunities to strengthen U.S. national security.

As a matter of first principle, cybersecurity is a team effort within the U.S. Federal government. To succeed in its missions the Defense Department must operate in partnership with other Departments and Agencies, international allies and partners, state and local governments, and, most importantly, the private sector.

To support its missions in cyberspace, the Defense Department conducts a range of activities outside of cyberspace to improve collective cybersecurity and protect U.S. interests. For example, the Defense Department cooperates with agencies of the U.S government, with the private sector, and with our international partners to share information, build alliances and partnerships, and foster norms of responsible behavior to improve global strategic stability.

Information sharing and interagency coordination. To secure and advance U.S. interests in cyberspace, DoD seeks to share information and coordinate with U.S. government agencies in an integrated fashion on a range of cyber activities. For example, if DoD learns of malicious cyber activities that will affect important U.S. networks and systems that are vital for U.S. national and economic security or public safety, DoD supports agencies like the Department of Homeland Security (DHS) and the Federal Bureau of Investigation (FBI) as they reach out to U.S. entities, and often other countries, to share threat information such as technical indicators of a potential attack. Such information sharing can significantly improve an organization’s ability to defend itself against a broad range of cyberattacks. In addition to sharing information, DoD partners with other agencies of the U.S. government to synchronize operations and to share lessons-learned and cybersecurity best-practices. This includes incident management and network defense response.

Building alliances, coalitions, and partnerships abroad. The Defense Department engages in a broad array of activities to improve cybersecurity and cyber operations capacity abroad. DoD helps U.S. allies and partners to understand the cyber threats they face and to build the cyber capabilities necessary to defend their networks and data. Allies and partners also often have complementary capabilities that can augment those of the United States, and the United States seeks to build strong alliances and coalitions to counter potential adversaries’ cyber activities. Strategically, a unified coalition sends a message that the United States and its allies and partners are aligned in collective defense. In addition to the Five Eyes treaty partners, DoD works closely with key partners in the Middle East, the Asia-Pacific, and Europe to understand the cybersecurity environment and build cyber defense capacity.

From 2013-2015, the Director of National Intelligence named the cyber threat as the number one strategic threat to the United States, placing it ahead of terrorism for the first time since the attacks of September 11, 2001. Potential state and non-state adversaries conduct malicious cyber activities against U.S. interests globally and in a manner intended to test the limits of what the United States and the international community will tolerate. Actors may penetrate U.S. networks and systems for a variety of reasons, such as to steal intellectual property, disrupt an organization’s operations for activist purposes, or to conduct disruptive and destructive attacks to achieve military objectives.

Potential adversaries have invested significantly in cyber as it provides them with a viable, plausibly deniable capability to target the U.S. homeland and damage U.S. interests. Russia and China have developed advanced cyber capabilities and strategies. Russian actors are stealthy in their cyber tradecraft and their intentions are sometimes difficult to discern. China steals intellectual property (IP) from global businesses to benefit Chinese companies and undercut U.S. competitiveness. While Iran and North Korea have less developed cyber capabilities, they have displayed an overt level of hostile intent towards the United States and U.S. interests in cyberspace.

In addition to state-based threats, non-state actors like the Islamic State in Iraq and the Levant (ISIL) use cyberspace to recruit fighters and disseminate propaganda and have declared their intent to acquire disruptive and destructive cyber capabilities. Criminal actors pose a considerable threat in cyberspace, particularly to financial institutions, and ideological groups often use hackers to further their political objectives. State and non-state threats often also blend together; patriotic entities often act as cyber surrogates for states, and non-state entities can provide cover for state-based operators. This behavior can make attribution more difficult and increases the chance of miscalculation.

The global proliferation of malicious code or software (“malware”) increases the risk to U.S. networks and data. To conduct a disruptive or destructive cyber operation against a military system or industrial control system requires expertise, but a potential adversary need not spend billions of dollars to develop an offensive capability. A nation-state, non-state group, or individual actor can purchase destructive malware and other capabilities on the black market. State and non-state actors also pay experts to search for vulnerabilities and develop exploits. This practice has created a dangerous and uncontrolled market that serves multiple actors within the international system, often for competing purposes. As cyber capabilities become more readily available over time, the Department of Defense assesses that state and non-state actors will continue to seek and develop cyber capabilities to use against U.S. interests.

Risk to DoD Networks and Infrastructure

The Defense Department’s own networks and systems are vulnerable to intrusions and attacks. In addition to DoD’s own networks, a cyberattack on the critical infrastructure and key resources on which DoD relies for its operations could impact the U.S. military’s ability to operate in a contingency. DoD has made gains in identifying cyber vulnerabilities of its own critical assets through its Mission Assurance Program – for many key assets, DoD has identified its physical network infrastructure on which key physical assets depend – but more must be done to secure DoD’s cyber infrastructure.

In addition to destructive and disruptive attacks, cyber actors steal operational information and intellectual property from a range of U.S. government and commercial entities that impact the Defense Department. Victims include weapons developers as well as commercial firms that support force movements through U.S. Transportation Command (USTRANSCOM). State actors have stolen DoD’s intellectual property to undercut the United States’ strategic and technological advantage and to benefit their own military and economic development. Finally, the Defense Department faces a risk from the U.S. government’s continued budgetary uncertainty. Although DoD has prioritized the allocation of resources in its budget to develop cyber capabilities, continued fiscal uncertainty requires that DoD plan to build its cyber capabilities under a declining overall defense budget. DoD must continue to prioritize its cyber investments and develop the capabilities required to defend U.S. interests at home and overseas.