Thanks to Matthijs Koot for bringing this to our attention. 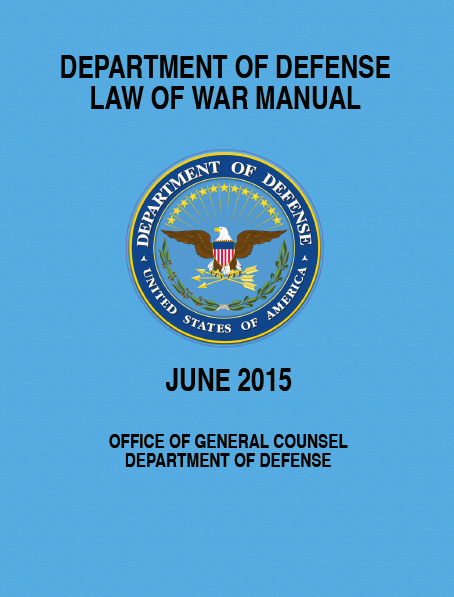 After World War II, U.S. military lawyers, trying thousands of defendants before military commissions did, in the words of Justice Robert Jackson, “stay the hand of vengeance and voluntarily submit their captive enemies to the judgment of law” in “one of the most significant tributes that Power has ever paid to Reason.” Reflecting on this distinctive history, one Chairman of the Joint Chiefs of Staff observed that “[t]he laws of war have a peculiarly American cast.” And it is also true that the laws of war have shaped the U.S. Armed Forces as much as they have shaped any other armed force in the world.

The law of war is a part of our military heritage, and obeying it is the right thing to do. But we also know that the law of war poses no obstacle to fighting well and prevailing. Nations have developed the law of war to be fundamentally consistent with the military doctrines that are the basis for effective combat operations. For example, the self-control needed to refrain from violations of the law of war under the stresses of combat is the same good order and discipline necessary to operate cohesively and victoriously in battle. Similarly, the law of war’s prohibitions on torture and unnecessary destruction are consistent with the practical insight that such actions ultimately frustrate rather than accomplish the mission.

This manual reflects many years of labor and expertise, on the part of civilian and military lawyers from every Military Service. It reflects the experience of this Department in applying the law of war in actual military operations, and it will help us remember the hard-learned lessons from the past. Understanding our duties imposed by the law of war and our rights under it is essential to our service in the nation’s defense.

“War” is sometimes used as a legal concept, i.e., the application or operation of a legal rule may depend on the existence of a “war,” “armed conflict,” or “hostilities.” As a legal concept, “war” has traditionally been viewed as a condition in which a State is prosecuting its rights by military force, usually against another State. However, the precise definition of “war” often depends on the specific legal context in which it is used.

1.5.1 Traditional Conception of War Under International Law. As international law began to regulate “war,” “hostilities,” and “armed conflict,” it became necessary to determine what “war” is for the purpose of triggering those legal obligations.

As a legal concept, war has usually been described as a condition or state that applies more broadly than only the mere employment of force or the mere commission of acts of violence.

When treated as a legal concept, “war” has been associated with a State’s use of force to vindicate its rights (principally, its inherent right of self-defense) under international law.

Traditionally, war has often been described as a legal condition between two or more States. However, certain law of war rules apply to non-international armed conflicts (such as intrastate conflicts or conflicts between a State and a non-State armed group).

4.24.2  Other Journalists. In general, independent journalists and other media representatives are regarded as civilians;4 i.e., journalism does not constitute taking a direct part in hostilities such that such a person would be deprived of protection from being made the object of attack.

4.24.5 Security Precautions and Journalists. States may need to censor journalists’ work or take other security measures so that journalists do not reveal sensitive information to the enemy. Under the law of war, there is no special right for journalists to enter a State’s territory without its consent or to access areas of military operations without the consent of the State conducting those operations.

11.2.1 Military Occupation as a Fact. Military occupation is a question of fact. The legal consequences arising from the fact of occupation (i.e., that this fact is the basis for both rights and duties) illustrates how the law of war may be viewed as both permissive and restrictive in nature.