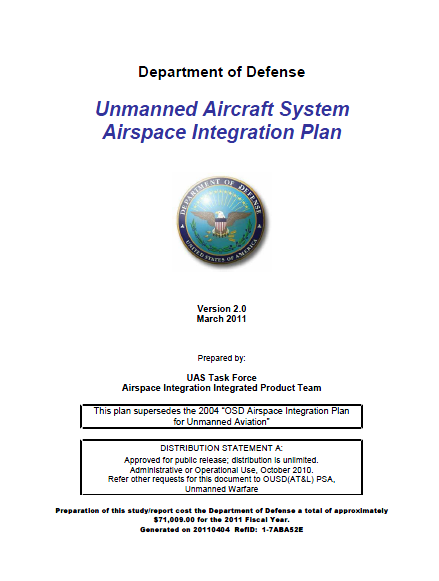 Over the past several years, Unmanned Aircraft Systems (UAS) have become a transformational force multiplier for the Department of Defense (DoD). When UAS were introduced into the front-line DoD aircraft force structure over a decade ago, small numbers of aircraft were fulfilling niche capabilities. This is no longer the case. The numbers and roles of UAS have expanded dramatically to meet overseas demands, and in some categories, more unmanned aircraft (UA) are budgeted than manned. Operational commanders have come to rely upon robust and persistent support based on unmanned platforms to execute their core missions against hostile forces.

While reliance on UAS continues to grow, the ability to integrate UAS into the National Airspace System (NAS) to support operations, training, and testing has not kept pace. Routine access to exercise and execute Combatant Command (COCOM)-tasked missions, and to support broader military and civil missions such as Homeland Security (HLS), Homeland Defense (HD), and Defense Support of Civil Authorities (DSCA) is necessary. Current NAS access for UAS is greatly limited under interim FAA policies that govern UAS operations in the NAS. Currently, DoD UAS operations conducted outside of Restricted, Warning and Prohibited areas are authorized under a temporary Certificate of Waiver or Authorization (COA) from the Federal Aviation Administration (FAA) or under limited conditions outlined in the 2007 DoD-FAA Memorandum of Agreement (MoA). Although DoD has been able to facilitate a small number of flights through the COA process, DoD has not been able to obtain the level of airspace access necessary to accomplish the wide range of DoD UAS missions at current and projected operational tempos.

An emphasis on expanding unmanned payloads and military functions is critical for a nation at war during economically-challenging times while taking into account the interests of other airspace users. The DoD employs unmanned aircraft safely and will continue to do so. The DoD is working to incrementally eliminate restrictions and limitations associated with UAS by developing and implementing policies, standards, and technologies that will further justify and enable routine NAS access for all required DoD UAS missions.

In addition to airworthiness certification and pilot/operator qualification, there are procedural, equipment, and technical regulatory compliance issues which impact access to the NAS. To address these issues, a range of capability validation and implementation activities are required.

COA Refinement. Refining the COA approval process is an important near-term activity for improving NAS access for UAS. DoD is examining whether COAs can be extended in duration, and allow for the operation of multiple UAS. The Department is also working to establish conditions for streamlined approval with the FAA and developing/validating standard mitigation strategies for COA challenges. Other items include developing procedures for lost link, divert, recovery, and terminal operations, and agreed-upon communications and terminology standards.

Small UAS Rules. The small UAS Aviation Rulemaking Committee (ARC) recently reviewed current policy and recommended the FAA develop a Special Federal Aviation Regulation (SFAR) for sUAS. The FAA accepted the recommendation and is developing the SFAR. One example of a specific recommendation by the ARC is expanding notification procedures for sUAS under 20 lbs outside of military controlled lands up to 700 feet AGL, with various restrictions.22 The DoD will leverage this work by seeking to incorporate many of the ARC’s recommendations into an updated DoD-FAA UAS MoA.

Standardized Lost Link Procedures. The JCOE, in collaboration with the military departments and selected COCOMs, is establishing a standard suite of lost-link procedures for DoD UAS in all phases of flight. Once adopted, these procedures will provide defined methods for lost-link recognition, notification, and the appropriate actions to either regain link or recover/divert. The DoD will coordinate with the FAA, as appropriate, on this “rules of the road” issue.

Equipment Compliance. To comply with FAA operating rules and regulations, UAS must have certain equipment to fly within the NAS. DoD subject matter experts will modify existing or develop new DoD equipment standards for technology development, as well as a means for compliance. OSD will evaluate and prioritize standards gaps, and refer them to standards organizations for creation/revision and publication. DoD stakeholders will work closely with the standards organizations, as needed, and adhere to critical standards and regulatory guidance from the FAA.

ABSAA Technology. ABSAA efforts are focused on developing onboard capability to perform both self separation and collision avoidance (CA) that ensure an appropriate level of safety. Current programs have phased validation schedules for Due Regard, En Route/Class A, and Divert/Class E/G operations. The Navy and Air Force are leveraging a common functional baseline for their RQ-4B Global Hawk and RQ-4N Broad Area Maritime Surveillance (BAMS) aircraft. In addition, a Traffic Alert and Collision Avoidance System (TCAS) and/or Automatic Dependent Surveillance-Broadcast (ADS-B) may be incorporated into UAS in coordination with FAA guidance to provide additional safe separation and collision assurance precautions.
With the execution of the outlined validation steps and implementation strategies, DoD UAS can incrementally achieve the necessary increased access to the NAS as time proceeds. Ultimately, UAS will achieve routine dynamic flight operations through continuing to diligently observe and constantly improve on high military standards for flight operations, which have been a hallmark of military aviation.