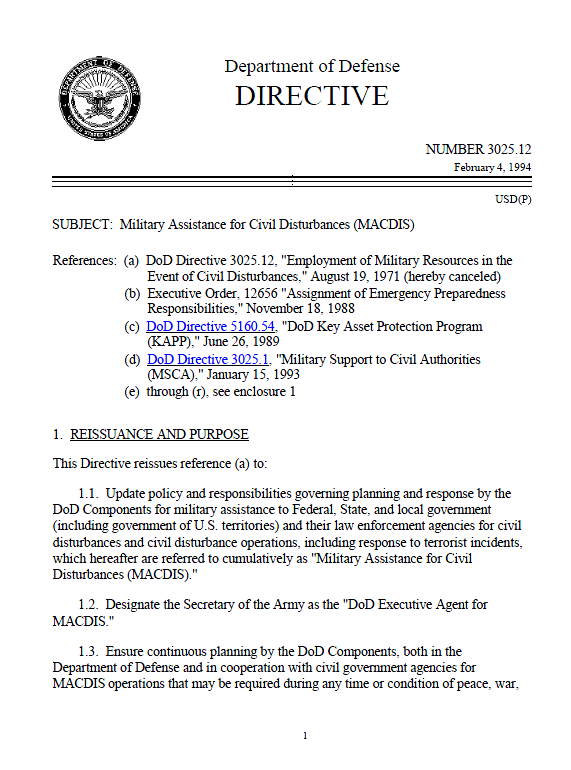 4.1.1. The President is authorized by the Constitution and laws of the United States to employ the Armed Forces of the United States to suppress insurrections, rebellions, and domestic violence under various conditions and circumstances. Planning and preparedness by the Federal Government and the Department of Defense for civil disturbances are important due to the potential severity of the consequences of such events for the Nation and the population.

4.1.2. Military resources may be employed in support of civilian law enforcement operations in the 50 States, the District of Columbia, the Commonwealth of Puerto Rico, and the U.S. territories and possessions only in the parameters of the Constitution and laws of the United States and the authority of the President and the Secretary of Defense, including delegations of that authority through this Directive or
other means.

4.8.1.1. The Attorney General coordinates all Federal Government activities during a major terrorist incident and advises the President as to whether and when to commit Military Forces in response to such a situation.

4.8.1.2. In the DoJ, the lead Agency for the operational response to a terrorist incident is the FBI. The initial tactical response to such incidents is made by the FBI Special Agent in Charge at the scene, under the supervision of the Director of the FBI, who has overall responsibility for ongoing operations to contain and resolve the incident.

4.8.2. All military preparations and operations, including the employment of Military Forces at the scene, for any terrorist incident in the 50 States, the District of Columbia, the Commonwealth of Puerto Rico, and U.S. territories and possessions, shall be the primary responsibility of the DoD Executive Agent under this Directive.

4.8.2.1. In discharging those functions, the DoD Executive Agent shall observe such law enforcement policies as the Attorney General may determine.

4.8.2.2. When a terrorist incident develops, having a potential for military involvement, the DoD Executive Agent may dispatch military observers to the incident site, on mutual agreement between Department of Defense and the FBI, to appraise the situation before any decision is made to commit Federal Military Forces. Any dispatch of U.S. counterterrorism forces as observers shall be specifically authorized by the Secretary of Defense through the Chairman of the Joint Chiefs of Staff.

4.8.3. When U.S. counterterrorism forces are authorized to assist with the resolution of a domestic terrorist incident, the Chairman of the Joint Chiefs of Staff shall issue the appropriate order for the Secretary of Defense. That order shall designate the command relationships for the deploying forces.