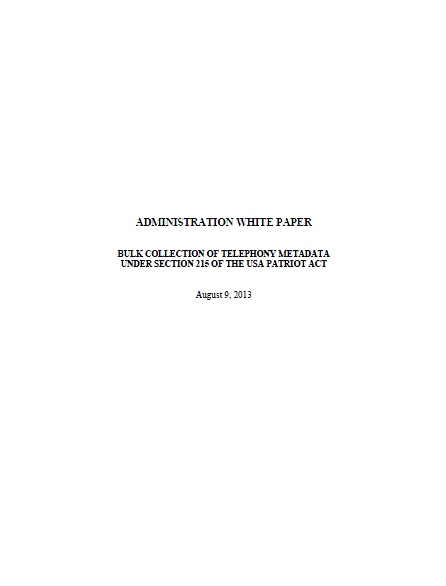 This white paper explains the Government’s legal basis for an intelligence collection program under which the Federal Bureau of Investigation (FBI) obtains court orders directing certain telecommunications service providers to produce telephony metadata in bulk. The bulk metadata is stored, queried and analyzed by the National Security Agency (NSA) for counterterrorism purposes. The Foreign Intelligence Surveillance Court (“the FISC” or “the Court”) authorizes this program under the “business records” provision of the Foreign Intelligence Surveillance Act (FISA), 50 U.S.C. § 1861, enacted as section 215 of the USA PATRIOT Act (Section 215). The Court first authorized the program in 2006, and it has since been renewed thirty-four times under orders issued by fourteen different FISC judges. This paper explains why the telephony metadata collection program, subject to the restrictions imposed by the Court, is consistent with the Constitution and the standards set forth by Congress in Section 215. Because aspects of this program remain classified, there are limits to what can be said publicly about the facts underlying its legal authorization. This paper is an effort to provide as much information as possible to the public concerning the legal authority for this program, consistent with the need to protect national security, including intelligence sources and methods. While this paper summarizes the legal basis for the program, it is not intended to be an exhaustive analysis of the program or the legal arguments or authorities in support of it.

This telephony metadata is important to the Government because, by analyzing it, the Government can determine whether known or suspected terrorist operatives have been in contact with other persons who may be engaged in terrorist activities, including persons and activities within the United States. The program is carefully limited to this purpose: it is not lawful for anyone to query the bulk telephony metadata for any purpose other than counterterrorism, and Court-imposed rules strictly limit all such queries. The program includes internal oversight mechanisms to prevent misuse, as well as external reporting requirements to the FISC and Congress.

Multiple FISC judges have found that Section 215 authorizes the collection of telephony metadata in bulk. Section 215 permits the FBI to seek a court order directing a business or other entity to produce records or documents when there are reasonable grounds to believe that the information sought is relevant to an authorized investigation of international terrorism. Courts have held in the analogous contexts of civil discovery and criminal and administrative investigations that “relevance” is a broad standard that permits discovery of large volumes of data in circumstances where doing so is necessary to identify much smaller amounts of information within that data that directly bears on the matter being investigated. Although broad in scope, the telephony metadata collection program meets the “relevance” standard of Section 215 because there are “reasonable grounds to believe” that this category of data, when queried and analyzed consistent with the Court-approved standards, will produce information pertinent to FBI investigations of international terrorism, and because certain analytic tools used to accomplish this objective require the collection and storage of a large volume of telephony metadata. This does not mean that Section 215 authorizes the collection and storage of all types of information in bulk: the relevance of any particular data to investigations of international terrorism depends on all the facts and circumstances. For example, communications metadata is different from many other kinds of records because it is inter-connected and the connections between individual data points, which can be reliably identified only through analysis of a large volume of data, are particularly important to a broad range of investigations of international terrorism.

Moreover, information concerning the use of Section 215 to collect telephony metadata in bulk was made available to all Members of Congress, and Congress reauthorized Section 215 without change after this information was provided. It is significant to the legal analysis of the statute that Congress was on notice of this activity and of the source of its legal authority when the statute was reauthorized.

The telephony metadata collection program also complies with the Constitution. Supreme Court precedent makes clear that participants in telephone calls lack a reasonable expectation of privacy for purposes of the Fourth Amendment in the telephone numbers used to make and receive their calls. Moreover, particularly given the Court-imposed restrictions on accessing and disseminating the data, any arguable privacy intrusion arising from the collection of telephony metadata would be outweighed by the public interest in identifying suspected terrorist operatives and thwarting terrorist plots, rendering the program reasonable within the meaning of the Fourth Amendment. Likewise, the program does not violate the First Amendment, particularly given that the telephony metadata is collected to serve as an investigative tool in authorized investigations of international terrorism.