The following Inspector General report was released by the Department of Justice on May 21, 2015. 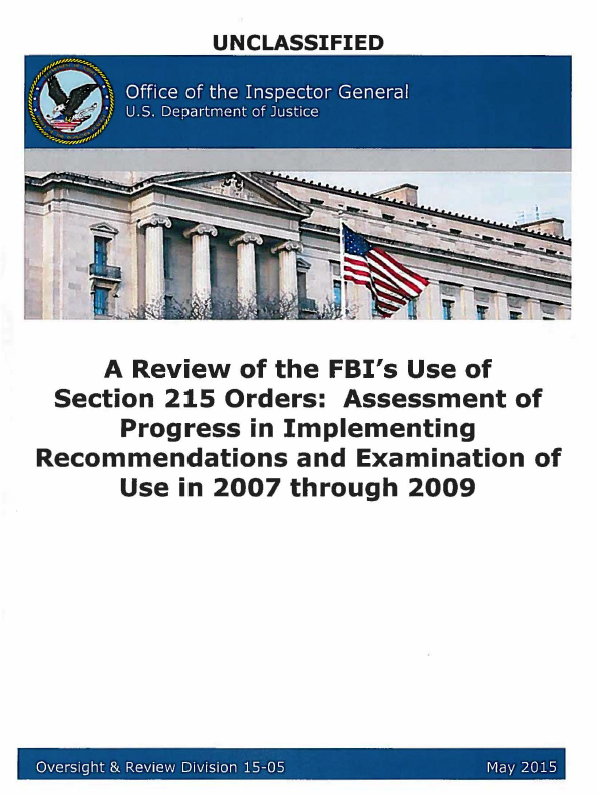 A Review of the FBI’s Use of Section 215 Orders: Assessment of Progress in Implementing Recommendations and Examination of Use in 2007 through 2009

To conduct this review, the OIG reviewed the Standard Minimization Procedures for Tangible Things Obtained Pursuant to Title V of the Foreign Intelligence Surveillance Act adopted by the Attorney General on March 7, 2013. We also examined over 10,000 documents obtained from the FBI and the Department’s National Security Division’s (NSD) Office of Intelligence, including files relating to each of the FBI’s applications to use Section 215 authority, and Department reports to Congress concerning that use during calendar years 2007 through 2009. We interviewed over 50 individuals from the FBI and the Department, including Section Chiefs from the FBI’s National Security Law  Branch (NSLB) and NSD’s Office of Intelligence as well as the attorneys, case agents, and analysts who worked on individual Section 215 orders.

In this review, we examined the progress the Department and the FBI have made in addressing the three recommendations in the OIG’s March 2008 report. In the 2008 report, we recommended that the Department implement minimization procedures for the handling of nonpublicly available information concerning U.S. persons produced in response to Section 215 orders, as required by the Reauthorization Act. We also recommended that the FBI develop procedures for reviewing materials received in response to Section 215 orders to ensure that the materials do not contain information outside the scope of the Foreign Intelligence Surveillance Court (FISA Court or the Court) orders. Finally, we recommended that the FBI develop procedures for handling material that is produced in response to, but outside the scope of, a Section 215 order.

The Reauthorization Act required that the Department adopt minimization procedures to govern the retention and dissemination of material produced pursuant to a Section 215 order. In response to the statutory requirement, the Department adopted Interim Minimization Procedures in September 2006. The Interim Procedures adopted four sections of the FBI’s National Security Investigation Guidelines (NSI Guidelines) and stated that the four sections were to be “construed” to meet the statutory definitions of minimization procedures contained in the Reauthorization Act. FBI agents were already required to comply with the NSI Guidelines in their entirety when seeking a Section 215 order and handling Section 215 productions. Thus, the Interim Procedures did not add any new requirements and did not affect the application of the NSI Guidelines to Section 215 material.

In our March 2008 report, we found that the Interim Procedures did not meet the requirements of the Reauthorization Act because they failed to provide FBI agents with specific guidance regarding the retention and dissemination of non-public U.S. person information obtained under Section 215 authority. We therefore recommended that the FBI develop final standard minimization procedures for business records that provided such guidance. In response to  our report, the Department stated that it would replace the Interim Procedures with standard minimization procedures “specifically tailored to collection under Section 215.”

We found the Supplemental Orders significant because the practice began almost 3 years after the Department was required by the Reauthorization Act to adopt specific minimization procedures for material produced in response to Section 215 orders, and over a year after we found that the Interim Procedures implemented by the Department in September 2006 failed to meet the requirements of the Reauthorization Act. The Department and FBI ultimately produced final minimization procedures specifically designed for Section 215 materials in 2013. The Attorney General adopted the FBI Standard Minimization Procedures for Tangible Things Obtained Pursuant to Title V of the Foreign Intelligence Surveillance Act on March 7, 2013 (Final Procedures), and In August 2013 the Department began to file Section 215 applications with the FISA Court which stated that the FBI would apply the Final Procedures to the Section 215 productions.

B. The Process for Seeking Section 215 Orders

The process to obtain a Section 215 order generally begins when an FBI case agent in a field office prepares a business records request form, which requires the agent to provide, among other things, the following information: a brief summary of the investigation, a specific description of the items requested, an explanation of the manner in which the requested items are expected to provide relevant information, and the identity of the custodian or owner of the requested items. The request form must be approved by the agent’s supervisor and the field office’s Chief Division Counsel and Special Agent in Charge. The approval process is automated through the FBI’s FISA Management System (FISAMS), which sends electronic notifications to each individual responsible for taking the next action in order to process the business record in the field office. After the approvals are completed In the field office, the FISAMS notifies the “substantive desk” (in the Counterterrorism Division or Counterintelligence Division) at FBI Headquarters.

At FBI Headquarters, the business records request form is reviewed and approved by both the substantive desk and NSLB. Once the FISAMS delivers the request to the substantive desk, it is assigned to an NSLB attorney who works with the case agent and other FBI personnel to obtain the information the NSLB attorney believes is necessary to include in the draft application and order. The draft application package is then reviewed by NSLB supervisors and forwarded to NSD, where the request is assigned to an NSD attorney.

The NSD attorney works with the NSLB attorney, case agents, and occasionally FBI intelligence analysts to obtain any additional information the NSD attorney believes is necessary to include in the draft application and order.13 An NSD supervisor then reviews the draft application package. The final application package is returned to the FBI for an accuracy review and additional edits may be made based on the FBI’s review of the final package. Upon completion of the final version, signatures of designated senior FBI personnel are obtained and an NSD attorney prepares the package for presentation to the FISA Court.

The order is then entered into the FISAMS and served by the FBI field office nearest to the provider designated in the order. Among other things, the order sets forth the deadline for producing the items. 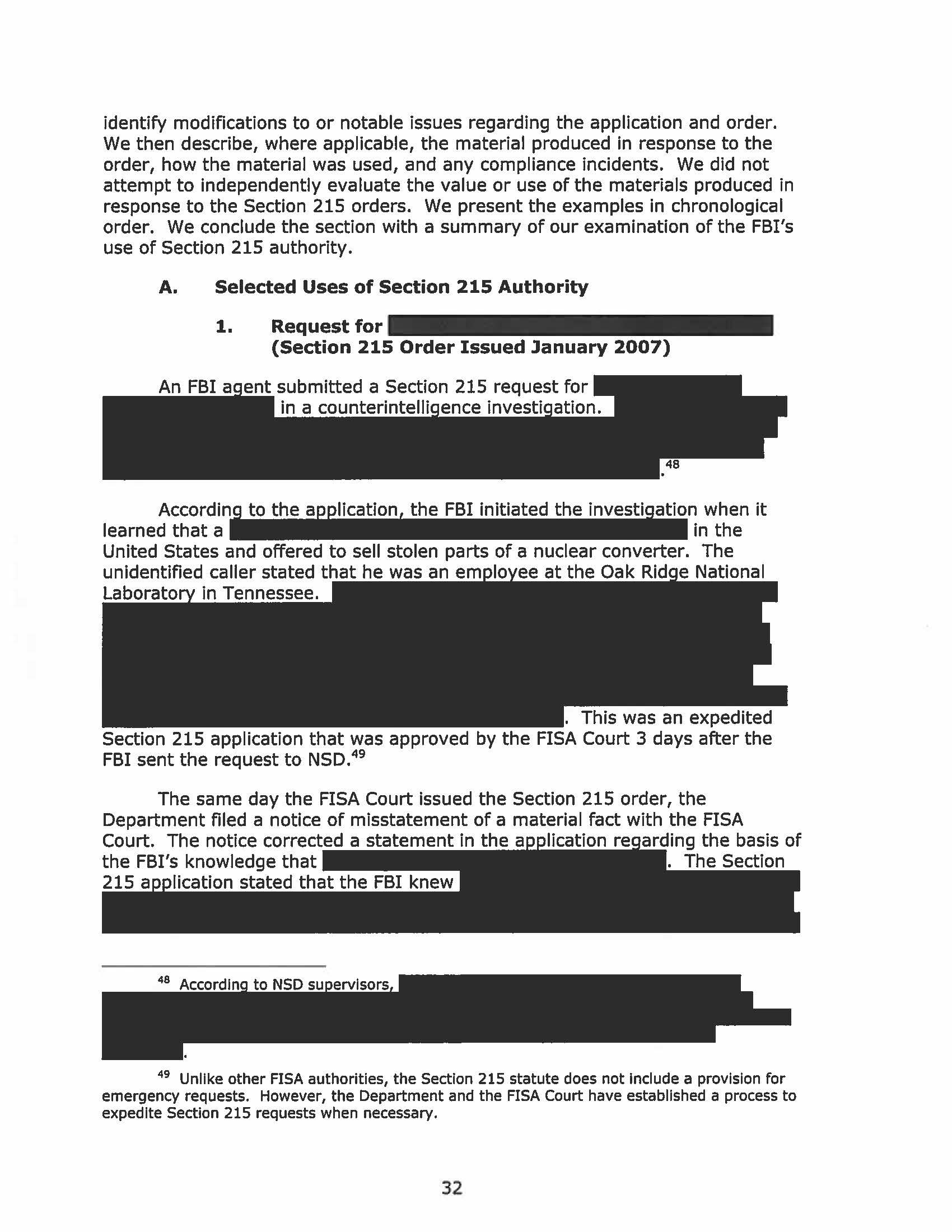 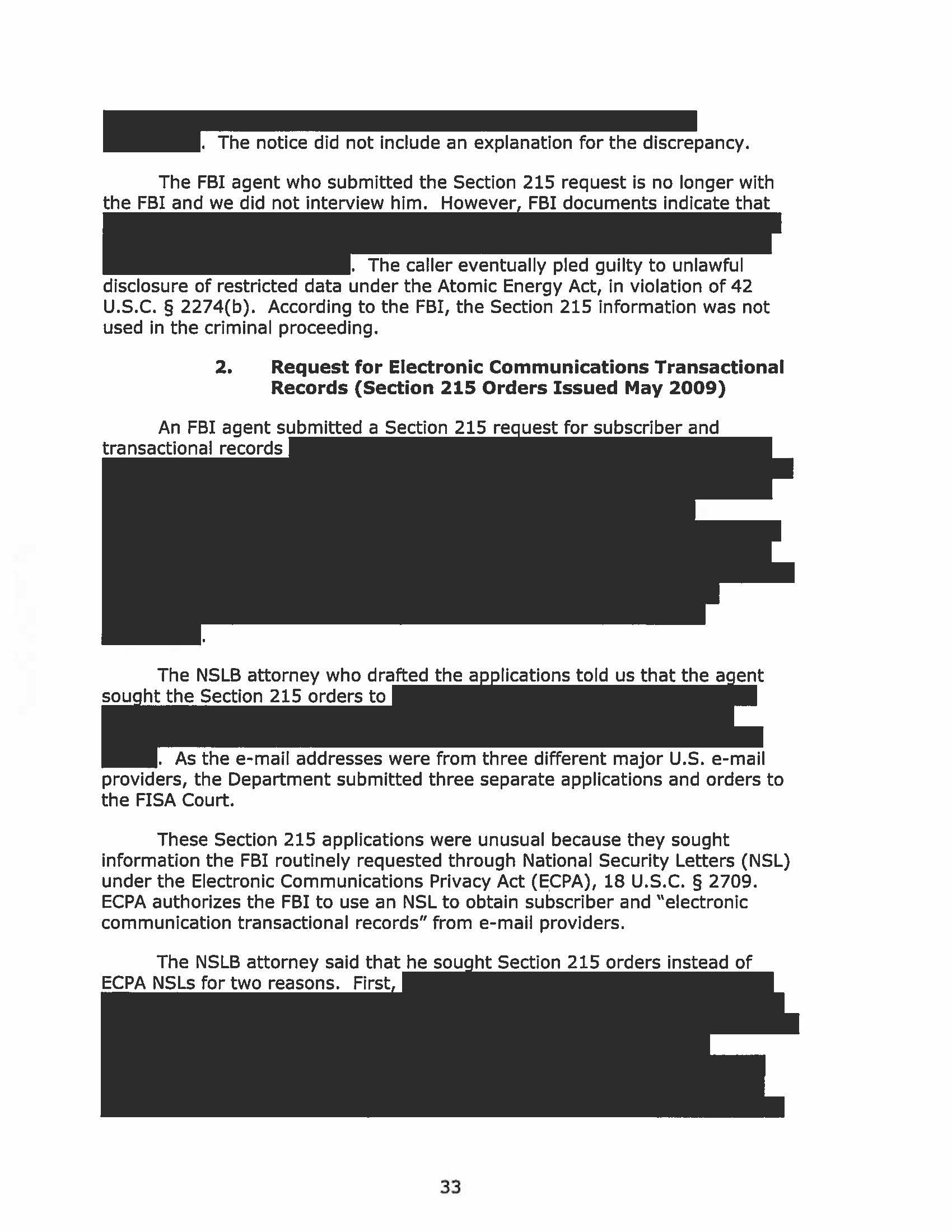 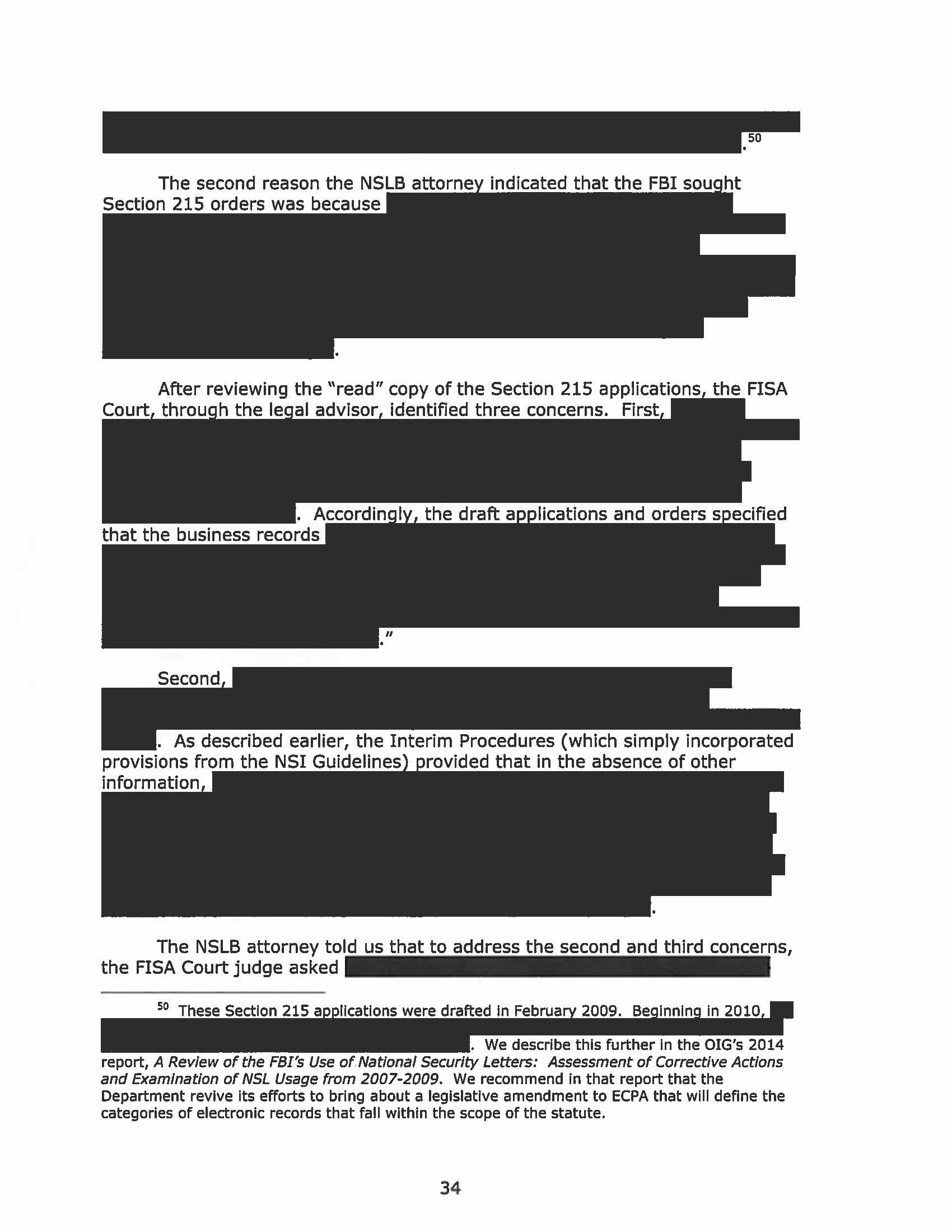