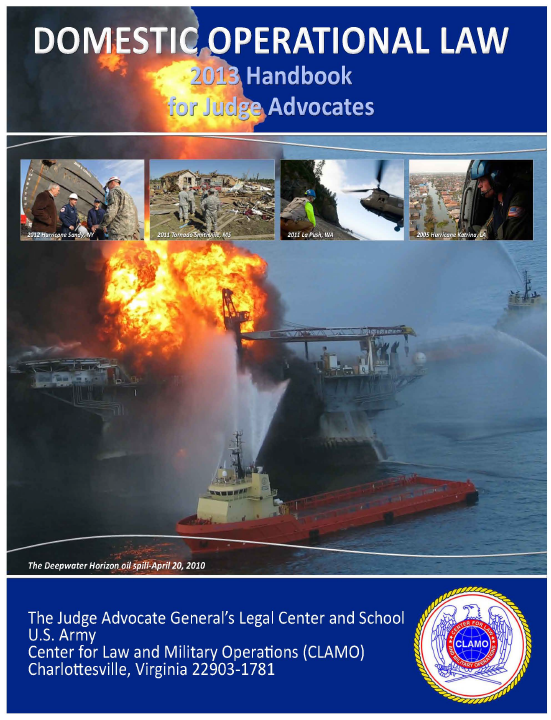 The Domestic Operational Law (DOPLAW) Handbook for judge advocates is a product of the Center for Law and Military Operations (CLAMO). Its content is derived from statutes, Executive Orders and Directives, national policy, DoD Directives, joint publications, service regulations, field manuals, and lessons learned by judge advocates and other practitioners throughout federal and state government. This edition includes substantial revisions. It incorporates new guidance set forth in Department of Defense Directive 3025.18 (Defense Support of Civil Authorities), Department of Defense Instruction 3025.21 (Defense Support of Civilian Law Enforcement Agencies), numerous new National Planning Framework documents, and many other recently updated publications. It provides amplifying information on wildfire response, emergency mutual assistance compacts, the role of the National Guard and Army units in domestic response, and provides valuable lessons learned from major incidents such as the 2010 Deepwater Horizon oil spill and Hurricane Sandy of 2012.

Within civilian communities in the United States, the local governments and the states have the primary responsibility for protecting life and property and maintaining law and order. Generally, federal forces are employed in support of state and local authorities to enforce civil law and order only when circumstances arise that overwhelm the resources of state and local authorities. This basic rule reflects the Founding Fathers’ hesitancy to raise a standing army and their desire to render the military subordinate to civilian authority. It is rooted in the Constitution and laws of the United States, and allows for exception only under extreme emergency conditions. But the Constitution also guarantees to the states that the Federal Government will aid in suppressing civil disturbances and empowers Congress to create laws that provide Federal forces for that purpose.

Under DoDD 3025.18, federal military commanders are provided emergency authority in unique circumstances. Federal military commanders have the authority, in extraordinary emergency circumstances where prior authorization by the President is impossible and local authorities are unable to control the situation, to engage temporarily in activities that are necessary to quell large-scale, unexpected civil disturbances either because:

• Such activities are necessary to prevent significant loss of life or wanton destruction of property and are necessary to restore governmental function and public order; or,
• if duly constituted Federal, State, or local authorities are unable or decline to provide adequate protection for Federal property or Federal governmental functions, then Federal action, including the use of Federal military forces, is authorized when necessary to protect the Federal property or functions.

Oral requests from local officials to a commander should be reduced to writing as soon as possible. An officer exercising emergency authority must report the facts surrounding the request, the command’s response, and any other relevant information through the chain of command to the Chairman of the Joint Chiefs of Staff, Joint Director of Military Support (JDOMS) with copy to USNORTHCOM Domestic Warning Center expeditiously. If the commander has not received a written request at the time he forwards the request to JDOMS, the written request should be forwarded to JDOMS as soon as it is available.

State and federal law govern search, seizure, arrest, detention, and confinement occurring during a CDO. The Attorney General is responsible for setting overall guidelines governing the conduct of civil disturbance operators and judge advocates should familiarize themselves with any policies and procedures set forth by the Department of Justice. Members should be trained in advance on proper legal procedures for search, seizure, arrest, and detention, and should be aware that actions not conforming to Constitutional standards could jeopardize prosecution of criminal actors or subject the member to civil or criminal liability.

a. Detention and Confinement

Whenever possible any arrest or apprehension should be made by the civil police force unless they are not available or require assistance. If it is necessary for military forces to make an apprehension, they should do so with the approval of civil authorities and should ensure civilian authorities are present to supervise. Civilians taken into custody should be transferred to civilian law enforcement authorities as soon as possible.