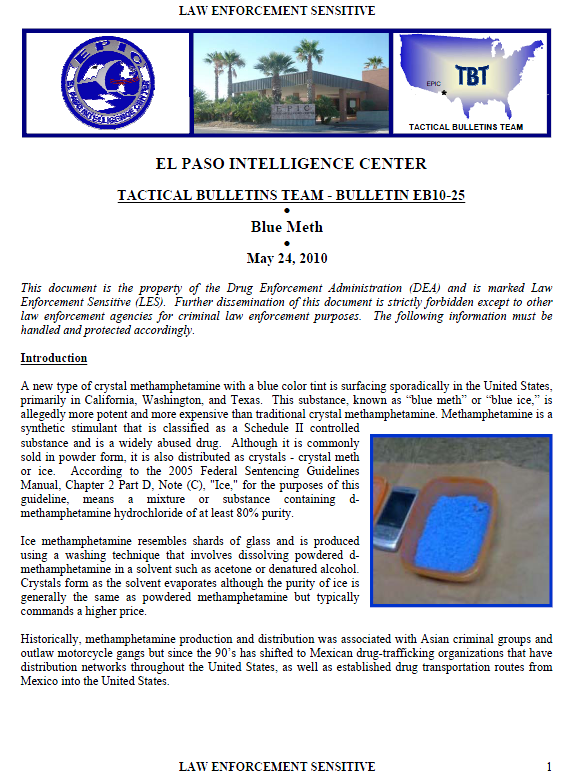 A new type of crystal methamphetamine with a blue color tint is surfacing sporadically in the United States, primarily in California, Washington, and Texas. This substance, known as “blue meth” or “blue ice,” is allegedly more potent and more expensive than traditional crystal methamphetamine. Methamphetamine is a synthetic stimulant that is classified as a Schedule II controlled substance and is a widely abused drug. Although it is commonly sold in powder form, it is also distributed as crystals – crystal meth or ice. According to the 2005 Federal Sentencing Guidelines Manual, Chapter 2 Part D, Note (C), “Ice,” for the purposes of this
guideline, means a mixture or substance containing dmethamphetamine hydrochloride of at least 80% purity.

Ice methamphetamine resembles shards of glass and is produced using a washing technique that involves dissolving powdered dmethamphetamine in a solvent such as acetone or denatured alcohol.

Crystals form as the solvent evaporates although the purity of ice is generally the same as powdered methamphetamine but typically commands a higher price.

Historically, methamphetamine production and distribution was associated with Asian criminal groups and outlaw motorcycle gangs but since the 90’s has shifted to Mexican drug-trafficking organizations that have distribution networks throughout the United States, as well as established drug transportation routes from Mexico into the United States.

EPIC’s first reporting of blue meth was the result of a seizure made by officers of the Lompoc, California, police department in July 2009, who recovered an ounce of alleged “blue” methamphetamine. The substance was field tested but since the methamphetamine was already blue, and is supposed to turn blue when mixed with the reagent, they were not certain that it was positive for meth. Testing performed later on the substance revealed that the product was blue chalk mixed with a cut of some other material (NFI).
(Source: Los Angeles, CA, Regional Criminal Information Clearing House – 07232009)

On December 15, 2009, as part of a joint DEA/U.S. Immigration and Customs Enforcement investigation, approximately 11 pounds of blue meth were seized from a vehicle in Newark, California. The two exhibits, contained in five Tupperware containers (10 x 5 inches), were submitted to the DEA Western Laboratory in San Francisco, California, where analysis of the exhibits (total net mass 5095 grams) found them to contain 98.4 percent and 98.2 percent d-methamphetamine hydrochloride. This was the first submission of blue-colored methamphetamine hydrochloride to the DEA Western Laboratory. (Source: DEA San Francisco, CA & DEA Microgram – March 2010)

On March 10, 2010, DEA Riverside, CA, seized approximately 20 pounds of meth, 15 gallons of liquid meth and multiple pounds of “blue” crystallized meth. The drugs were seized as part of an investigation in
conjunction with the Inland Regional Narcotics Enforcement Team. In April 2010, DEA Austin, Texas, seized three exhibits of meth during an investigation (NFI). The first two were white crystal meth that tested at 97 percent purity. The third exhibit was blue/aqua-colored meth (lab results pending). Intelligence indicates that the meth was purportedly from La Familia, although this has not been confirmed. La Familia is a Mexican drug-trafficking organization and an organized crime syndicate based in the Mexican state of Michoacán. Formerly allied to the Gulf Cartel as part of Los Zetas, it separated into its own organization in 2006.
(Source: DEA Austin, TX)

It is still unknown why the meth is blue or what the color is supposed to indicate — high quality, a specific source, or possibly a method of production. In one report it was mentioned that because the substance was blue, it was difficult to field test, since it was supposed to turn blue when mixed with the reagent. It was later reported to be blue chalk.

There has also been speculation that the meth chemist was imitating the television series “Breaking Bad” (2008), a drama about a high school chemistry teacher who turns to cooking meth to pay for his cancer
treatment. His meth was blue and was supposed to be of high quality.

In the meth exhibits analyzed by the DEA Western Laboratory, the blue color were likely due to dye or pigmentation compounds, but none of these substances were positively identified. The chemist did indicate that the color was present throughout the entire crystal and grinding of the crystals afforded a homogenous blue powder. The chemist conducting the analysis found methamphetamine, with no by-products of any kind being detected.

According to another source of information, blue methamphetamine is the newest and latest fad for methamphetamine, and the cost is higher with a range from $13,000 to $30,000 per pound. According to this particular source, the color is produced by extracting soap or perfume to obtain the blue tint and the aroma sweet, similar to chewing gum. (DEA San Jose, CA)

Questions or comments in reference to this report can be directed to the EPIC Research and Analysis Section, Special Projects Unit, I/A Monika Barnum at (915) 760-2747 or Unit Chief Frank Mallory at (915) 760-2024.