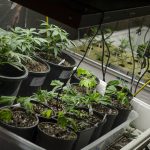 A bulletin from the El Paso Intelligence Center (EPIC) released to law enforcement in February 2017 describes how Mexican transnational criminal organizations (TCOs) are continuing to exploit legalized markets for the sale and distribution of marijuana. In January 2016, EPIC produced a bulletin detailing how “data provided by the Drug Enforcement Administration (DEA) and open source reporting” indicated that Mexican TCOs had not been adversely affected by marijuana legalization in numerous markets, noting instead “that the effort of legalization had conversely brought new opportunities for illicit profits from marijuana sales.” 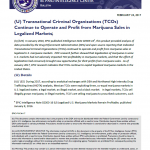 Three bulletins from the El Paso Intelligence Center on a drug-smuggling ambulance, cocaine hidden in tin cans and pot contaminated with Halon.

On June 3, 2010, Buncombe/Henderson North Carolina Joint Criminal Interdiction Task Force agents seized 45.45 kilograms (100 pounds) of marijuana that was intentionally contaminated with chemical irritants in Asheville, North Carolina, during a traffic stop. The drugs were seized from a 1994 Dodge Ram conversion van, with a temporary Colorado registration, that was stopped for a traffic violation on eastbound Interstate 40 at mile marker 43 in Asheville. The driver was allegedly travelling from Denver, Colorado, to Charlotte, North Carolina. The driver provided agents with a Mexican driver’s license and claimed to reside in Kansas City, Kansas. The agents requested, and received, consent to search the van. During the search a drug-detection canine alerted to a carpet-covered plywood bed platform that was built in the back of the van.

A new type of crystal methamphetamine with a blue color tint is surfacing sporadically in the United States, primarily in California, Washington, and Texas. This substance, known as “blue meth” or “blue ice,” is allegedly more potent and more expensive than traditional crystal methamphetamine. Methamphetamine is a synthetic stimulant that is classified as a Schedule II controlled substance and is a widely abused drug. Although it is commonly sold in powder form, it is also distributed as crystals – crystal meth or ice. According to the 2005 Federal Sentencing Guidelines Manual, Chapter 2 Part D, Note (C), “Ice,” for the purposes of this guideline, means a mixture or substance containing dmethamphetamine hydrochloride of at least 80% purity.