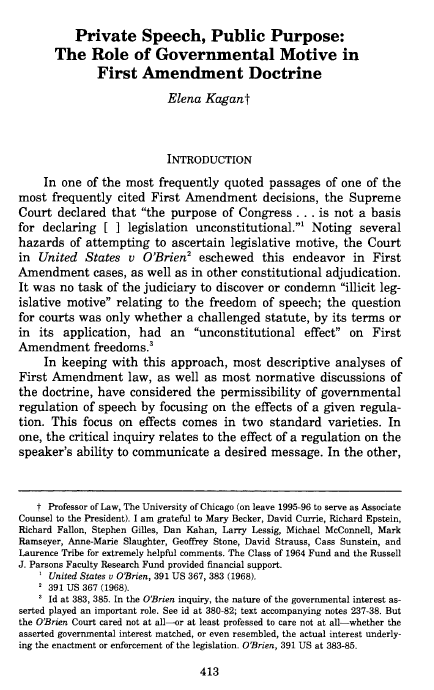 The University of Chicago Law Review

In one of the most frequently quoted passages of one of the most frequently cited First Amendment decisions, the Supreme Court declared that “the purpose of Congress … is not a basis for declaring [ ] legislation unconstitutional.” Noting several hazards of attempting to ascertain legislative motive, the Court in United States v O’Brien eschewed this endeavor in First Amendment cases, as well as in other constitutional adjudication. It was no task of the judiciary to discover or condemn “illicit legislative motive” relating to the freedom of speech; the question for courts was only whether a challenged statute, by its terms or in its application, had an “unconstitutional effect” on First Amendment freedoms.

In keeping with this approach, most descriptive analyses of
First Amendment law, as well as most normative discussions of
the doctrine, have considered the permissibility of governmental
regulation of speech by focusing on the effects of a given regulation.
This focus on effects comes in two standard varieties. In
one, the critical inquiry relates to the effect of a regulation on the
speaker’s ability to communicate a desired message. In the other,
the critical inquiry relates to the effect of a regulation on the
listener’s ability to obtain information. In either case, however,
what matters is the consequence of the regulation.
This Article shifts the focus from consequences to sources; I
argue, notwithstanding the Court’s protestations in O’Brien, that
First Amendment law, as developed by the Supreme Court over
the past several decades, has as its primary, though unstated,
object the discovery of improper governmental motives. The doctrine
comprises a series of tools to flush out illicit motives and to
invalidate actions infected with them. Or, to put the point another
way, the application of First Amendment law is best understood
and most readily explained as a kind of motive-hunting.

A. The Distinction Between Content-Based and Content-Neutral Laws

The distinction between content-based and content-neutral
regulations of speech serves as the keystone of First Amendment
law.83 Content-neutral restrictions on speech-restrictions that
by their terms limit expression without regard to what is
said-usually are subject to a fairly loose balancing test. So, for
example, in reviewing a law that bans all billboards within city
limits, the Court might consider the strength of the state interests
asserted (say, in aesthetics and traffic safety), the availability
of alternative means to protect those interests, the extent to
which the law limits expression, and the existence of alternative
avenues of communication. This analysis may well result in a
decision that the law accords with the First Amendment. Content-based

restrictions on speech-restrictions that by their
terms limit expression on the basis of what is said-usually are
subject to far more rigorous scrutiny. This is true even in cases
like R.A.V. in which the government concededly could restrict the
speech affected through a broader law written in content-neutral
language. Formulations of the standard used to review contentbased
action vary, but the Court most often requires the government
to show a compelling interest that could not be attained
through less restrictive means. Application of this standard usually
leads to a law’s invalidation.

Somewhat mitigating the starkness of this scheme, a further,
hazier distinction operates within the realm of content-based
regulation. Here, the Court often differentiates between viewpoint-
based restrictions and all other content-based restrictions,
including, most notably, restrictions based on subject matter.
So, for example, the Court would treat differently a law prohibiting
the use of billboards for all political advertisements and a law
prohibiting the use of billboards for political advertisements supporting
Democrats. The former might meet constitutional standards;
the latter would never succeed in doing so. It is not so
much that the Court formally uses two different standards for
subject matter and viewpoint regulation; in most contexts, a
strict scrutiny standard applies to content-based action of all
kinds. But the Court, when reviewing subject-matter restrictions,
either may apply a purportedly strict standard less than
strictly or may disdain to recognize the law as content based at
all. By contrast, the Court almost always rigorously reviews
and then invalidates regulations based on viewpoint.

In what has become one of the most castigated passages in
modern First Amendment case law, the Court pronounced in
Buckley v Valeo that “the concept that government may restrict
the speech of some elements of our society in order to enhance
the relative voice of others is wholly foreign to the First Amendment…”

The Court made this statement in the course of
invalidating expenditure ceilings in a campaign finance law, one
justification for which was that they “equaliz[ed] the relative
ability of individuals and groups to influence the outcome of elections.”‘
But the statement has ramifications far beyond the
area of campaign finance. It applies as well to a wide variety of
schemes designed to promote balance or diversity of opinion. So,
for example, the statement could have explained the Court’s
earlier holding in Miami Herald Publishing Co. v Tornillo disapproving
a “right of reply” statute that required a newspaper to
grant space in its pages to any political candidate whose record
the newspaper had criticized. So too the statement could
summarize the view of the four dissenting Justices in Turner
Broadcasting System, Inc. v FCC that “must-carry” rules, requiring
cable operators to provide access to local broadcast television
stations, violate the First Amendment.