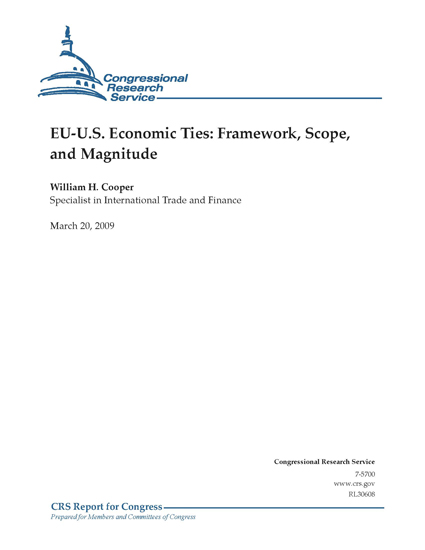 The United States and the European Union (EU) economic relationship is the largest in the world—and it is growing. The modern U.S.-European economic relationship has evolved since World War II, broadening as the six-member European Community expanded into the present 27-member European Union. The ties have also become more complex and interdependent, covering
a growing number and type of trade and financial activities.

In 2008, $1,571.2 billion flowed between the United States and the EU on the current account, the most comprehensive measure of U.S. trade flows. The EU as a unit is the largest merchandise trading partner of the United States. In 2008, the EU accounted for $274.5 billion of total U.S. exports (or 21.1%) and for $367.9 billion of total U.S. imports (or 17.5%) for a U.S. trade deficit of $93.4 billion. The EU is also the largest U.S. trade partner when trade in services is added to trade in merchandise, accounting for $198.3 billion (or 36.4% of the total in U.S. services exports) and $152.1 billion (or 37.6% of total U.S. services imports) in 2008. In addition, in 2008, a net $148.2 billion flowed from U.S. residents to EU countries into direct investments, while a net $181.1 billion flowed from EU residents to direct investments in the United States. Policy disputes arise between the United States and the EU generating tensions which sometimes lead to bilateral trade disputes. Yet, in spite of these disputes, the U.S.-EU economic relationship remains dynamic. It is a relationship that is likely to grow in importance assuming the trends toward globalization and the enlargement of the EU continue, forcing more trade and investment barriers to fall. Economists indicate that an expanded relationship would bring economic benefits to both sides in the form of wider choices of goods and services and greater investment
opportunities.

But increasing economic interdependence brings challenges as well as benefits. As the U.S. and EU economies continue to integrate, some sectors or firms will “lose out” to increased competition and will resist the forces of change. Greater economic integration also challenges long-held notions of “sovereignty,” as national or regional policies have extraterritorial impact. Similarly, accepted understanding of “competition,” “markets,” and other economic concepts are tested as national borders dissolve with closer integration of economies.

U.S. and EU policymakers are likely to face the task of how to manage the increasingly complex bilateral economic relationship in ways that maximize benefits and keep frictions to a minimum, including developing new frameworks. For Members during the 111th Congress, it could mean weighing the benefits of greater economic integration against the costs to constituents in the context of overall U.S. national interests. This report will be updated as events warrant.

The United States has been a strong advocate for the construction of close economic ties among the West European countries since the end of World War II. During the Cold War, the European Community served U.S. foreign policy and national security interests as a force of stability that drew former enemies—(West) Germany and France—closer together and that helped to build Western Europe into an economic bulwark against the Soviet Bloc. The formation of an economically unified Europe has served U.S. economic interests as well by accelerating European economic growth and development which has opened trade and investment opportunities for the United States. Many studies have concluded that the formation of the EU has had a net positive economic impact on the world as a whole because it has led on balance to more trade creation than diversion of trade from other countries.

The EU continues to become a more closely knit entity with the formation of the European Monetary Union comprising 16 of the 27 members of the EU and their adoption of a common currency, the euro. These developments have already had an impact on U.S.-EU trade ties. 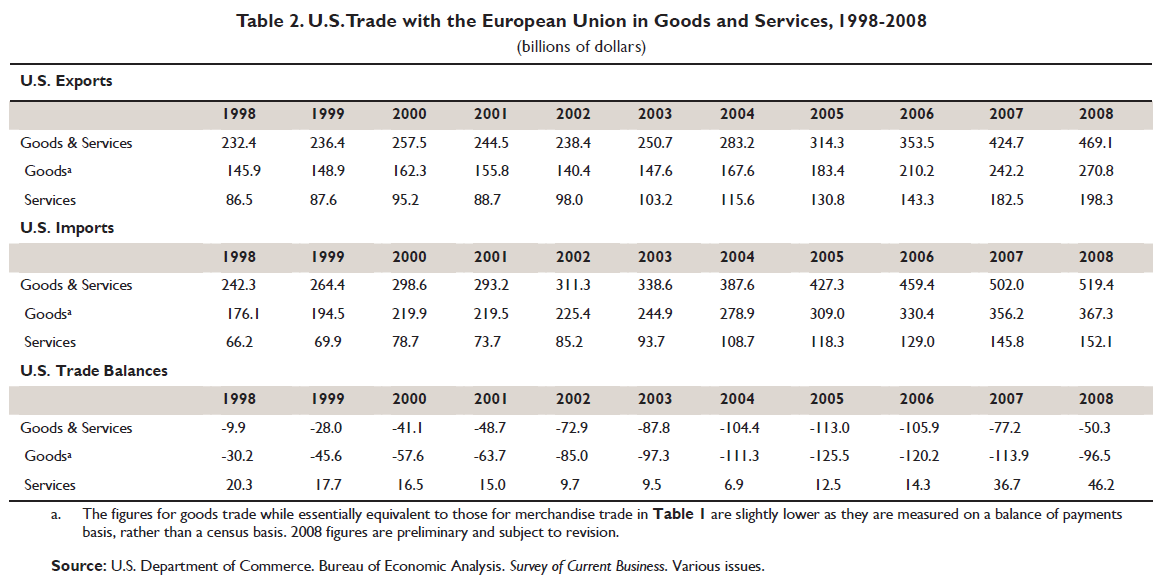