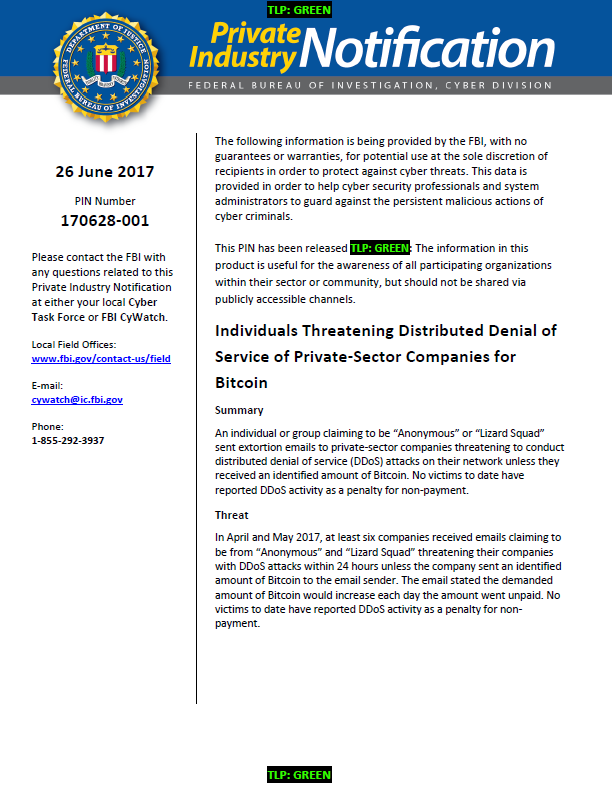 In April and May 2017, at least six companies received emails claiming to be from “Anonymous” and “Lizard Squad” threatening their companies with DDoS attacks within 24 hours unless the company sent an identified amount of Bitcoin to the email sender. The email stated the demanded amount of Bitcoin would increase each day the amount went unpaid. No victims to date have reported DDoS activity as a penalty for non-payment.

Reporting on schemes of this nature go back at least three years.

The FBI suggests precautionary measures to mitigate DDoS threats to include, but not limited to:

The FBI encourages recipients of this document to report information concerning suspicious or criminal activity to their local FBI field office or the FBI’s 24/7 Cyber Watch (CyWatch). Field office contacts can be identified at www.fbi.gov/contact-us/field. CyWatch can be contacted by phone at (855) 292-3937 or by e-mail at CyWatch@ic.fbi.gov. When available, each report submitted should include the date, time, location, type of activity, number of people, and type of equipment used for the activity, the name of the submitting company or organization, and a designated point of contact. Press inquiries should be directed to the FBI’s national Press Office at npo@ic.fbi.gov or (202) 324-3691.