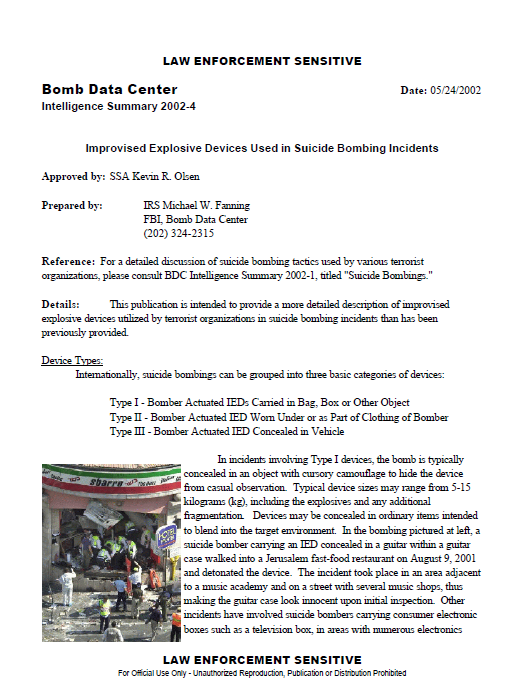 Details: This publication is intended to provide a more detailed description of improvised explosive devices utilized by terrorist organizations in suicide bombing incidents than has been previously provided.

Details: This publication is intended to provide a more detailed description of improvised
explosive devices utilized by terrorist organizations in suicide bombing incidents than has been previously provided. 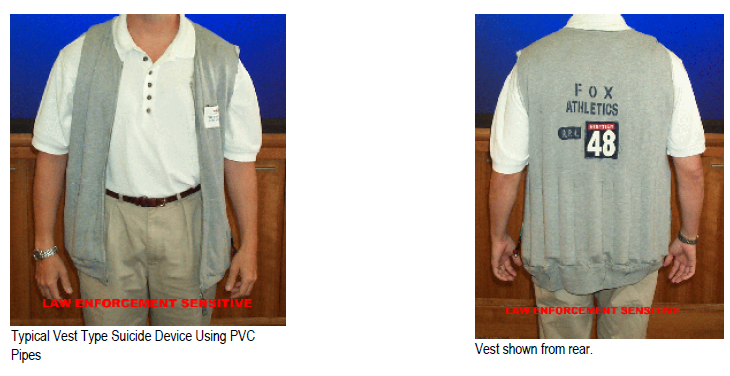 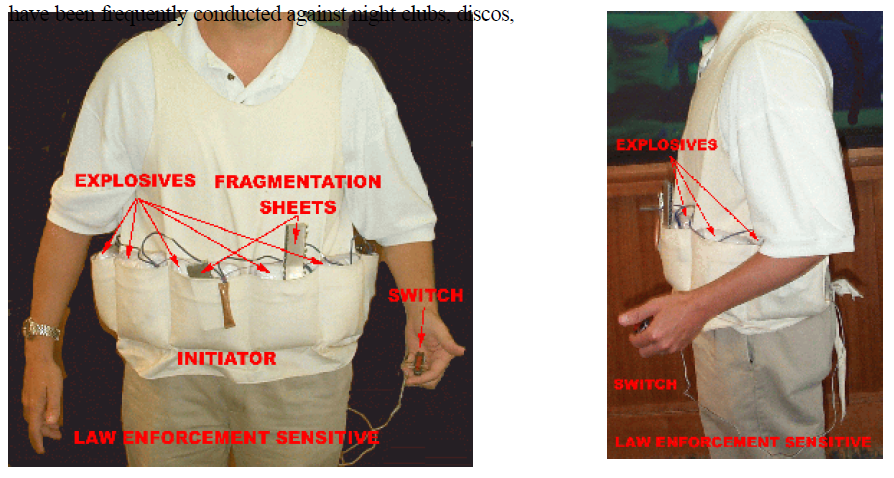 Internationally, suicide bombings can be grouped into three basic categories of devices:

In incidents involving Type I devices, the bomb is typically concealed in an object with cursory camouflage to hide the device from casual observation. Typical device sizes may range from 5-15 kilograms (kg), including the explosives and any additional fragmentation. Devices may be concealed in ordinary items intended to blend into the target environment. In the bombing pictured at left, a suicide bomber carrying an IED concealed in a guitar within a guitar case walked into a Jerusalem fast-food restaurant on August 9, 2001 and detonated the device. The incident took place in an area adjacent to a music academy and on a street with several music shops, thus making the guitar case look innocent upon initial inspection. Other incidents have involved suicide bombers carrying consumer electronic boxes such as a television box, in areas with numerous electronics stores. One of the more common tactics is to use a backpack or small duffel bag to carry the device into the target area. In general, the bombers will usually try to match the external package with the target environment and select items which will not attract attention. Typically, a push-button switch is attached to a wire extending out of the object and into the hand carrying the device.

Type II devices involve the use of “body bombs,” which are useful for the infiltration of the target area by terrorist operatives. This choice of methodology remains the most popular for suicide bombers and is one of the most effective means of infiltrating a suicide device to the chosen target. Body bombs typically run in size from 1/2 to 10 kg, with the limiting factor generally being the ability to conceal the device under clothing. Explosives may range from cast military grade explosives such as TNT to improvised high explosives such as TATP. The devices may be worn under the clothing as a belt by the suicide bomber or built into an outer garment. In some cases, the explosives are contained in metal or plastic pipes, typically when powders or crystalline explosives are used or when the bomber is seeking an enhanced fragmentation effect. The figures below represent a typical suicide IED concealed within a vest. From the front, little of the device is visible, however, the rear view shows the outline of the PVC pipes that have been sewn into the inside of the vest clearly. In this type of device, the explosives are contained in multiple small diameter (1 1/2″ or less) plastic pipes. The explosives in this particular vest are generally highly sensitive improvised explosives, which can be initiated with a 1.5 volt lamp. In many cases, an improvised initiator is not required in every pipe as the explosion of one pipe can sympathetically detonate other pipes. Power is supplied by a 9-volt or larger battery and initiation is controlled through a simple switch, usually concealed in a pocket of the vest, the bombers pants or run through a sleeve to the bombers hand.

To date, suicide bombs have utilized fairly crude initiation systems, generally consisting of a simple electric switch with initiators connected in series and a power source. Terrorists have been observed using a wide variety of explosive materials, including a large number of materials based on Triacetone Triperoxide (TATP) mixed with other components. These mixtures may have a different appearance than standard TATP (colorless crystals), however, any unknown chemical in a bombing situation should be assumed to have the highest possible sensitivity to heat, shock, and friction.

Standard procedures when arriving at the scene of a suspected or confirmed suicide bombing should be to:

1. Secure a perimeter around the incident for police, forensic and emergency workers.
2. Conduct a search for secondary devices (including suicide bombers, placed devices
and vehicle bombs).
3. Deploy officers (uniform and plainclothes) outside the perimeter to look for suspicious
individuals.
4. In the event of a suspected premature explosion of a suicide bomber, carefully check
the body of the bomber for secondary devices or unexploded components..
5. Injured suspected suicide bombers should be required to strip prior to bomb squad
personnel approaching to conduct a physical search.
6. Inspection of wounded suicide bombers should be conducted with remote means
whenever possible.