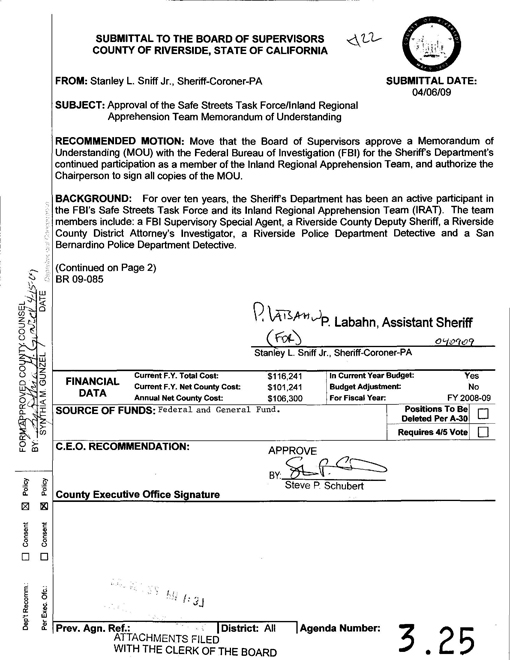 This Memorandum of Understanding (MOU) is entered into by and between the Federal Bureau of Investigation (FBI); and the Riverside Sheriff’s Office,

The purpose of this MOU is to delineate the responsibilities of SSTF participants, maximize inter-agency cooperation, and formalize relationships between the participating agencies for policy guidance, planning, training, public and media relations. This MOU is not intended, and should not be construed, to create any right or benefit, substantive or procedural, enforceable at law or otherwise by any third party against the parties, the United States, or the officers, employees, agents, or other associated personnel thereof.

The mission of IRAT is to achieve maximum coordination and cooperation among participating agencies in an effort to identify, locate, and apprehend violent offenders wanted for committing violent crimes to include murder, robbery, violent assault, serious sexual assaults, kidnaping, and other major crimes of violence. In addition to the safe apprehension of known and/or unknown criminals wanted for prior offenses, IRAT may target known career criminals for prosecution and conduct appropriate investigation in cases wherein the participating agencies have jurisdictional interests, IRAT will enhance the effectiveness of all participating agencies through a well coordinated effort seeking the most effective investigative avenues by which to locate and apprehend fugitives who are attempting to avoid prosecution.

Overall supervision of the personnel on the SSTF shall be the shared responsibility of the participants. The Special Agent in Charge (SAC) of the Los Angles Field Office shall designate one Supervisory Special Agent (SSA) to have direct and daily responsibility for all personnel and investigative matters pertaining to the SSTF.

Responsibility for conduct, not under the direction of the SAC or SSA, of each SSTF member, both personally and professionally, shall remain with the respective agency head and each agency shall be responsible for the actions of their respective employees.

Each agency member who is a SSTF member will be subject to the personnel rules, regulations, laws, and policies applicable to those of their respective agencies. FBI participants will continue to adhere to the Bureau’s ethical standards and will remain subject to the Supplemental Standards of Ethical Conduct for employees of the Department of Justice. Each SSTF member will continue to report to his or her respective agency head for non-investigative administrative matters not detailed in this MOU. Subject to other provisions in this document, continued membership on the SSTF will be based on performance and will be at the discretion of each member’s respective supervisor.

Members of the SSTF will follow their own agency’s policy concerning firearms discharge and use of deadly force.

Local and state law enforcement personnel designated to the SSTF, subject to a limited background inquiry, may be sworn as federally deputized Special Deputy United States Marshals, with the FBI securing the required deputation authorization. These deputations should remain in effect throughout the tenure of each investigator’s assignment to the SSTF or until the termination of the SSTF, whichever comes first. Administrative and personnel policies imposed by the participating agencies will not be voided by deputation of their respective personnel.

The FBI may authorize members of the SSTF to use vehicles owned or leased by the FBI when necessary in connection with SSTF surveillance, case management and investigations, and if available.