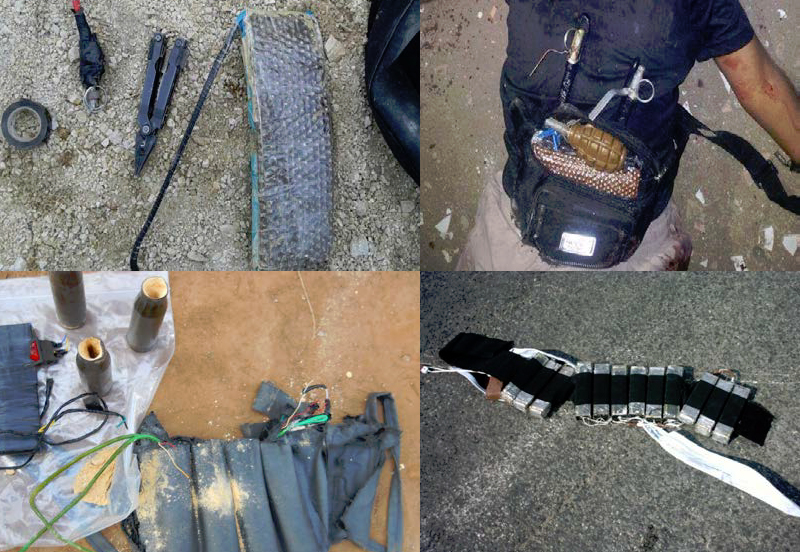 Images of suicide vests and belts from an FBI’s intelligence note released after the November 2013 .

An analysis of recent suicide bombings throughout the Middle East, Europe and Africa by the FBI Terrorism Explosive Device Analytical Center (TEDAC) that was released after the terrorist attacks in Paris, France last month states that “suicide vest and belt improvised explosive devices (IEDs) in the Middle Eastern, African, and European regions likely . . . have minimal correlation” and do not indicate tactical migration.

Following the attacks in Paris, which featured seven separate suicide bombings, media coverage has focused on the prominent use of suicide vests as indicative a tactical shift for the Islamic State of Iraq and the Levant (ISIL).  Though there are past examples of suicide attacks inside Europe, such as the 2005 London bombings, the use of suicide vests in the Paris attacks has been said to represent an entirely new type of threat, a tactic once relegated to the battlefields of Iraq and Syria now appearing in European cities.  However, an External Intelligence Note issued by TEDAC on November 17 titled “Suicide Vest and Belt Improvised Explosive Device Tactics in the Middle Eastern, African, and European Regions Show Minimal Signs of Tactic Migration” and obtained by Public Intelligence presents a different view, attributing the tactical similarities to factors such as “available materials, training, and local or national counter-IED policies.”

While TEDAC would normally assume that “similarities between suicide vests and belts from different regions likely indicate common training or common IED facilitators,” the intelligence note states that these similarities “may be a product of independent open source research, thus resulting in a false link between devices and subjects.”  Moreover, the similarities may “indicate tactic or construction influences” based on the nature of the devices and access to required materials.  Similarities can include everything from “overall IED construction, wiring techniques, common explosives, initiators, switches, electronic diagrams, enhancements, and employment.”

When broadly examined, the types of “suicide vests and belt IEDs observed in each region” covered in the intelligence note “differ broadly in many characteristics, resulting in an inconclusive determination that the suicide vest and belt IEDs prevalent in any one area translate to tactic migration.”

A study by the Institute of National Security Studies found that there were approximately 370 suicide bombings in the Middle East region in 2014 claiming the lives of over 2,700 victims.  Iraq, Yemen, Lebanon and Libya all saw a significant increase in the use of the tactic over the previous year.  Prior to the attacks in Paris, suicide bombings in Europe have been primarily limited to Turkey and Russia.

The intelligence note takes several quotes from an interview conducted by Der Spiegel with a captured ISIL leader named Abu Abdullah discussing the group’s target selection process and methods for constructing suicide vests.  He describes how he used “explosive fill removed from artillery shells for car bombs” and “drilled open the shells of anti-aircraft guns to construct suicide belts because he believed the effect of the powder was more intense.”  According to the interview, he would receive a potential bombers’ measurements in “advance from the leadership in order to be able to make a well-fitting belt” and “always had belts in different sizes prepared.”

Explosive vests in Yemen have also included similar design elements.  A suicide bomber tied to Al Qaeda in the Arabian Peninsula (AQAP) was killed in July 2015 by Houthi forces prior to detonating his vest, allowing for forensic analysis.  The device featured “dual grenade-pin detonators, a main charge wrapped with sheets of ball bearings, and detonation cord that was placed inside a pouch around the bomber’s waist.”

Similar to the Middle East, bombings in Turkey have often used either C4 or trinitrotoluene (TNT) in suicide vests.  Vests used in the Middle East often included other high-powered explosives such as Semtex or Research Development Formula X (RDX) or triacetone triperoxide (TATP), the explosive that was reportedly used in the vests detonated during the Paris attacks.