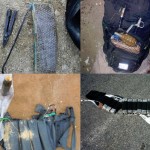 An analysis of recent suicide bombings throughout the Middle East, Europe and Africa by the FBI Terrorism Explosive Device Analytical Center (TEDAC) that was released after the terrorist attacks in Paris, France last month states that “suicide vest and belt improvised explosive devices (IEDs) in the Middle Eastern, African, and European regions likely . . . have minimal correlation” and do not indicate tactical migration. 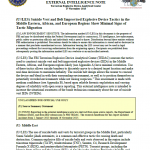 The FBI Terrorism Explosive Device Analytical Center (TEDAC) assesses the tactics used to construct suicide vest and belt improvised explosive devices (IEDs) in the Middle Eastern, African, and European regions likely have minimal correlation. Use of these tactics allows suicide bombers to discretely move to a desired target location and make real-time decisions to maximize lethality. The suicide belt design allows the wearer to conceal the device and blend in with their surrounding environment, as well as to position themselves in potentially crowded environments while not raising suspicion.