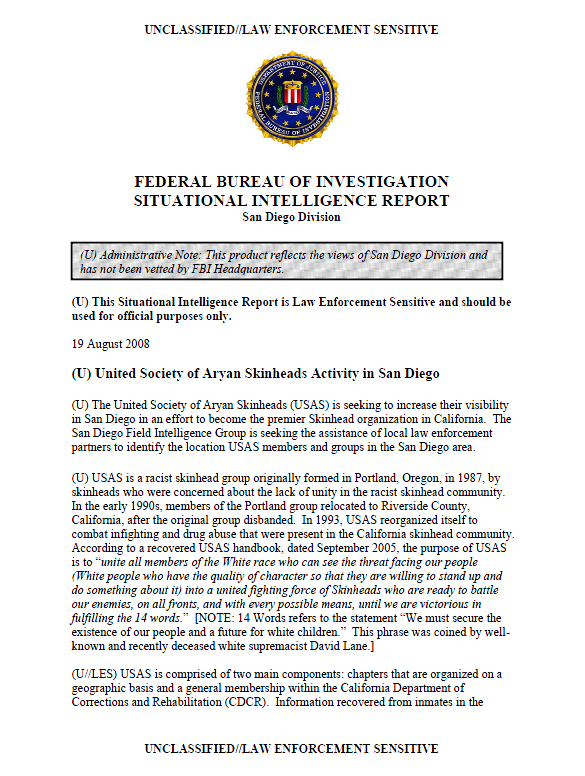 (U) United Society of Aryan Skinheads Activity in San Diego

(U) The United Society of Aryan Skinheads (USAS) is seeking to increase their visibility in San Diego in an effort to become the premier Skinhead organization in California. The San Diego Field Intelligence Group is seeking the assistance of local law enforcement partners to identify the location USAS members and groups in the San Diego area.

(U) USAS is a racist skinhead group originally formed in Portland, Oregon, in 1987, by skinheads who were concerned about the lack of unity in the racist skinhead community. In the early 1990s, members of the Portland group relocated to Riverside County, California, after the original group disbanded. In 1993, USAS reorganized itself to
combat infighting and drug abuse that were present in the California skinhead community.
According to a recovered USAS handbook, dated September 2005, the purpose of USAS
is to “unite all members of the White race who can see the threat facing our people
(White people who have the quality of character so that they are willing to stand up and
do something about it) into a united fighting force of Skinheads who are ready to battle
our enemies, on all fronts, and with every possible means, until we are victorious in
fulfilling the 14 words.” [NOTE: 14 Words refers to the statement “We must secure the
existence of our people and a future for white children.” This phrase was coined by wellknown
and recently deceased white supremacist David Lane.]

(U//LES) Each chapter is controlled by a five-man Chapter Council that reports directly
to a five member High Council that oversees USAS.

(U//LES) Corroborated source reporting indicates USAS is attempting to become the
premier skinhead organization in California. As part of its strategy, USAS is actively
recruiting new members both inside and outside of the CDCR. Additionally, USAS is
attempting to absorb other skinhead groups under the USAS banner. Although numerous
white supremacist groups desire to unite various factions within the movement, attempts
to unite these groups have failed because the groups are reluctant to give up their
individual identities. USAS has differentiated themselves from other white supremacist
organizations through its demonstrated ability to recruit other skinhead organizations,
most notably the Wolfpack Skinheads, American Frontline Skinheads, and the Warrior
Skins. Further source reporting indicates USAS is currently attempting to absorb other
skinhead organizations within San Diego County.

(U//LES) The San Diego Field Intelligence Group (FIG) has obtained corroborated
information indicating that USAS has designated the San Diego Chapter as their
“flagship” chapter. However, current available intelligence also indicates a rift within
the leadership of the San Diego Chapter. San Diego FIG assesses that the San Diego
Chapter of USAS has a current strength of approximately 50 members and prospective
members. A review of criminal records of identified USAS members in San Diego
County shows a significant pattern of criminal violence. Law enforcement personnel
should use caution when contacting USAS members or associates.

(U) There are various groups within the white supremacy movement in the San Diego
territory, including multiple skinhead organizations. Skinheads can usually be identified
by their dress, typically wearing combat boots (frequently Doc Marten’s), straight leg
jeans, suspenders (referred to as braces), flight jackets, and short hair cuts. It is important
to recognize that there are several non-racist factions within the skinhead community who
also dress in a similar fashion.

(U) In an effort to avoid classification as gang members, skinheads typically claim
“independent” when asked for a gang association. While independent skinheads exist,
they are the exception rather than the rule. Close observation of the pins and patches on
their flight jackets, and a close examination of their tattoos will typically identify which
“crew” a particular skinhead associates with.

(U) In an effort to aid law enforcement identification of USAS members, the San Diego
FIG provides the following descriptions and pictures of commonly utilized USAS
symbols. 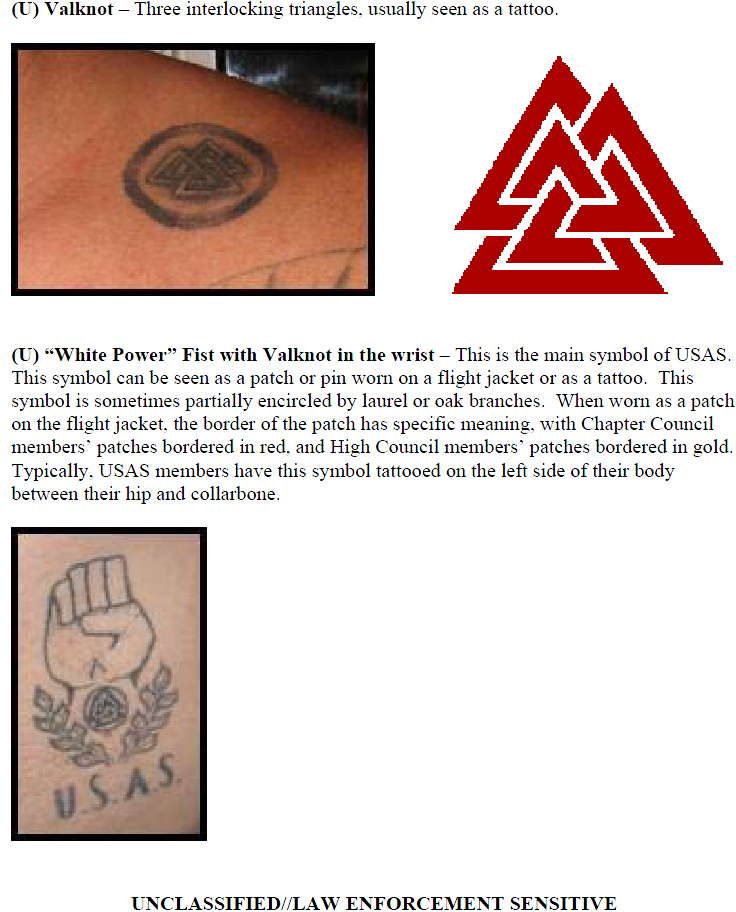 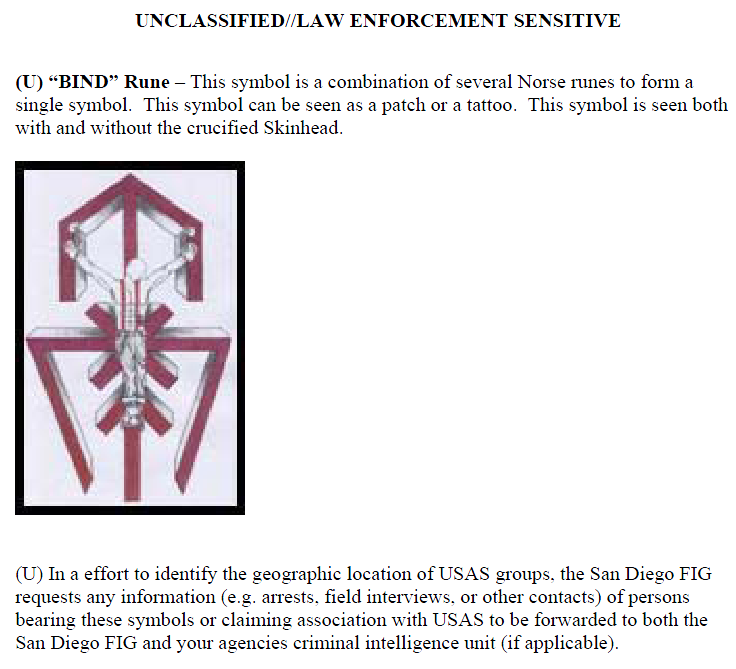