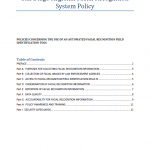 These policies are intended to provide law enforcement agencies uniform guidance regarding their appropriate use of a facial recognition field identification tool. Nlets sponsored the preparation of its Privacy Impact Assessment Report for the Utilization of Facial Recognition Technologies to Identify Subjects in the Field to better describe the privacy issues surrounding law enforcement agencies’ utilization of facial recognition technologies in the field. These policies were generated in response to the discussions contained in that report.

Group logos, flags, and other extremist imagery are prevalent throughout most terrorist and extremist groups. Imagery provides a means of evoking existing emotional and historical memories in addition to communicating ideas to potential recruits. Logos and symbols are often used as visual representation of groups and/or their ideology. Print, internet propaganda, tattoos, clothing and accessories, stickers, and other graphic media are the most common representations of extremist imagery. First responders need to be aware of common extremist imagery as it may indicate involvement or support for a particular domestic extremist organization or international terrorist group.

Firefighters’ roles as a first responder and an emergency medical service allow for unique access to people and information, which can generate invaluable tips and leads. Because the presence and effectiveness of firefighters mitigate the impact of a terrorist incident involving massive human casualties, terrorists have historically conducted preoperational planning that target firefighting agencies in order to limit the effectiveness of their reaction capabilities.

Hotels, motels, and other lodging facilities have been used by extremist individuals and groups as locations to manufacture improvised explosive devices (IEDs) in close proximity to their intended targets. Hotels, specifically rooms with kitchens or kitchenettes, allow these groups or individuals to greatly reduce the potential for a premature detonation. Given the short distance to the intended target the risk of premature detonation during transportation is minimized.

(U//FOUO) Jakarta Hotel Bombings: A Look at Insider Threats and the Targeting of Western Executives

(U//FOUO) This intelligence bulletin was produced in conjunction with the Jakarta Hotel Bombing Intelligence Briefing which is also available from the San Diego RTTAC. This document presents an analysis of the Jakarta suicide bombings and the post‐attack investigation to include key judgments, tactics, techniques, and procedures. This bulletin is based on preliminary open source reporting pending a final report from Indonesian authorities.

(U) United Society of Aryan Skinheads Activity in San Diego

(U) The United Society of Aryan Skinheads (USAS) is seeking to increase their visibility in San Diego in an effort to become the premier Skinhead organization in California. The San Diego Field Intelligence Group is seeking the assistance of local law enforcement partners to identify the location USAS members and groups in the San Diego area.