The following document was released in January 2011 as part of the final report of the Financial Crisis Inquiry Commission. 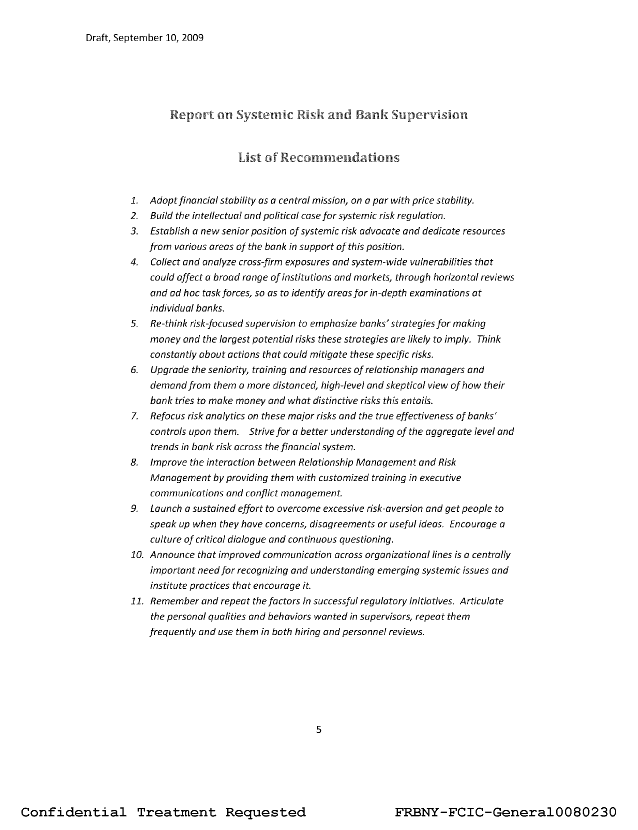 This is a report by David Beim and Christopher McCurdy in consultation with the following team: Beverly Hirtle, Meg McConnell, Patricia Mosser, Marc Saidenberg, Michael Silva, Kevin Stiroh, Ronald Stroz and Til Schuermann. In addition Anna Kovner took detailed notes on all the interviews and meetings and made many useful suggestions.

We were asked to draw on bank supervisory lessons learned from the recent financial crisis and to make an assessment of changes the Federal Reserve Bank of New York (FRBNY) might make in its organization and practices, with a particular focus on Bank Supervision, if the Federal Reserve is designated as the nation’s systemic risk regulator. In this process we looked at areas where FRBNY has done well, that should be reinforced, and also at areas for improvement. Drawing on these lessons, we make a number of recommendations that should be applied to future conduct of standard bank supervision. Further, we believe that systemic risk in the major financial institutions has become such a powerful issue for bank health that we recommend these changes even if the “systemic risk regulator” designation does not occur.

The 2007-2009 financial crisis was a systemic collapse – a sudden collapse of asset prices and the failure or near-failure/rescue of almost all large financial institutions. The United States has not witnessed a systemic collapse since the 1930s, and many thought it was impossible for the United States to have such an event, given the apparent advances in risk management that preceded it. However, the collapse occurred and was very large, damaging to the real economy and extremely expensive to resolve. A desire not to let such an event happen again pervades the body politic, indeed is demanded by many.

But preventing such an event is neither easy nor costless. Financial crises typically follow large economic booms. While such booms may be characterized as bubbles in retrospect, they are extremely popular while they are occurring. The Federal Reserve has long seen its mission against inflation “to take away the punch bowl just when the party is getting good”; if it now becomes the systemic risk regulator it must be prepared to do the same against rising systemic risk, using tools beyond monetary policy. This is likely to be unpopular unless the ground is extremely well prepared and broadly understood. We return to this threshold problem in more detail below.

Assuming that systemic risk above some level should be controlled, the regulator has two problems: recognition and action. Recognition requires insight and creative thinking, a willingness to make inferences based on partial information. It also requires communication across organizational lines to “connect the dots” when financial innovations occur and new risks appear. It requires people willing to challenge the prevailing orthodoxy, even the Fed’s own orthodoxy.

A very frequent theme in our reviews was a fear of speaking up:

“No one feels individually accountable for financial crisis mistakes because management is through consensus.”
“Grow up in this culture and you learn that small mistakes are not tolerated.”
“Don’t want to be too far outside from where the management is thinking.”
“No opportunity to earn enough merit from ten right policy decisions to compensate for one wrong decision.”
“The organization does not encourage thinking outside the box.”
“After you get shot down a couple of times you tend not to “go there” any more.”
“Until I know what my boss thinks I don’t want to tell you.”
“Members of the vetting committee fight their way through a giant document rather than risk prioritizing and being wrong. People are risk-averse, so they include everything.”

It is not always clear whether these comments describe the speakers’ own attitudes or their perception of the attitudes of others. Nevertheless, the strength of this theme is unmistakable and implies an organizational culture that is excessively risk-averse. If officers feel intimidated and passive, they will never be effective in communicating with other areas, forming their own views and signaling when something important seems to be wrong – they will just follow orders.

All organizations give people both positive and negative signals – every car needs both an engine and a brake. But some organizations, usually without realizing it, send too many negative signals. This management behavior has a chilling effect on individual initiative. Members of an organization will only take the risk of speaking up if they feel they will be rewarded for this rather than punished. This is a cultural issue of the greatest importance. Consider how other organizational cultures encourage the best ideas to rise to the surface. Academic cultures, for example, value strong criticism because it will make everyone’s work better; such criticism is not dependent on organizational rank but is a function of intelligence and insight, which can occur at any level of seniority. Shutting out critique would leave vulnerabilities in the final product. Consulting firms have regular brain-storming sessions at which individuals at all levels are expected to speak their minds without fear of reprisal; law firms sometimes behave in much the same way.

FRBNY needs to adopt some of these characteristics, to develop a culture of critical challenge. A systemic risk focus will require individual initiative and out-of-the-box thinking; these attributes will lead to robust inquiry in day-to-day bank supervision. This issue is the responsibility of the senior managers. They need to encourage dissent rather than stifle it. Even if the senior officers are themselves unafraid of speaking up, they may inadvertently be encouraging those below them not to do so.