The following report was released in February 2012 along with a study conducted by FEMA and the International Association of Chiefs of Police on improving community reporting of suspicious activity. 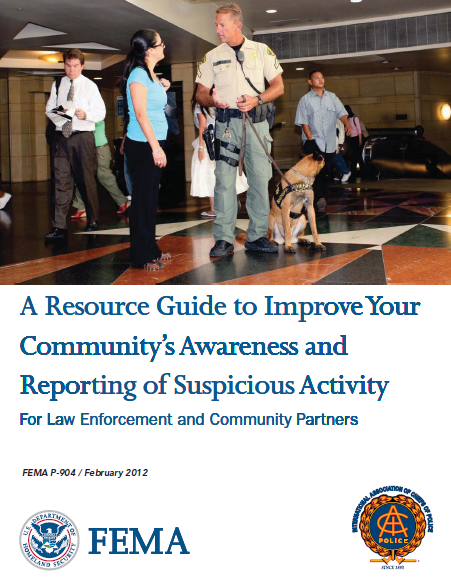 This guide offers recommendations for local outreach campaigns, explains how to effectively develop and disseminate messages in order to help the public better understand their role in reporting suspicious activity, and helps law enforcement agencies and community partners to understand, navigate, and use the many resources available to help build and sustain local efforts. New technologies, resources, and innovative practices highlighted within this document can be used to improve the education, communication, and trust amongst communities and law enforcement agencies who serve them. With the proper tools and knowledge, individuals and entire communities will help law enforcement agencies identify, investigate, and prevent crime and terrorism.

The Nationwide Suspicious Activity Reporting Initiative defines suspicious activity as “observed behavior reasonably indicative of pre-operational planning related to terrorism or other criminal activity.” IACP’s primary research found that most individuals rely on a combination of factors when determining if an activity, behavior, or object is suspicious and merits reporting to the authorities. These factors are:

• Concern about the potential for harm to the community.
• Belief that the information may be useful to law enforcement.
• Personal observation of activities.
• Personal instinct.
• The agreement of others nearby that something isn’t right.

It is important to note that suspicious activity reports should not include factors such as race, ethnicity, national origin, or religious affiliation.

Suspicious behaviors that may be indicative of terrorism can include criminal activity such as a break-in at a protected site, theft of something associated with a facility (e.g. badges, uniforms, technology, or documents), unauthorized cyber intrusion or hacking, or spoken or written threats about causing damage to a facility. On the other hand, suspicious activities in and of themselves may not always be criminal, but when combined with other activities may be precursors to a larger criminal or terrorist plot. This can include asking questions beyond mere curiosity about a building’s operations, security, or infrastructure such that a reasonable person would consider the activity suspicious. Suspicious objects may include bags, suitcases, packages, cars, and other objects that are left unattended or seem out of place in the surroundings.

Suspicious activity, behaviors, or objects may occur or be observed in areas around critical infrastructure. This includes transportation systems, power and electrical plants, hospitals, banking institutions, and other facilities that are considered essential for the functioning of society and economy. Increasingly, terrorists around the world are focusing on “soft targets” – locations with less political significance but typically with large amounts of people. These may include hotels, tourist attractions, and outdoor markets. Suspicious activity can occur anywhere – in residential neighborhood, rural areas, or larger metropolitan areas.

– Encourage people to note and report as many details as they can about the activity: where the activity occurred; when it happened; any significant physical descriptors about vehicles, locations, or other objects involved.

• Encourage people to be aware of precursor activities. (See List 1)

– Share the DHS “If You See Something, Say Something™” video with community members for an overview of suspicious behaviors. (www.dhs.gov/files/reportincidents/see-something-say-something.shtm)

• Caution people to keep a safe distance from, and never approach, a person that appears to be engaged in suspicious activity. If safe to do so, the observer should consider the entire situation and take note of additional observations before calling authorities. Terrorism planning involves the intent to commit a criminal act and it is the responsibility of law enforcement officials to determine if a report of suspicious activity builds enough cause for investigation. Individuals should not hesitate to report suspicious activity.

• Tailor your message to include information about local threats. As a law enforcement or community leader, it is important to know what threats exist specific to your area. For example, consider any large dams, military bases, or bridges in your community. Your local emergency management office can tell you more about critical infrastructure concerns. By including information about local concerns into messaging, agencies can help residents better understand these issues and larger terrorist threats. Consider reaching out specifically to residents near local critical infrastructure to encourage them to partner in awareness efforts.

• Encourage business owners and managers to train employees. Front line employees such as maids, clerks, receptionists, and parking attendants often have the most interaction with the public and are among the first to be aware of suspicious activity. It is important to familiarize them with the types of industry-specific suspicious activities, behaviors, or objects that they may encounter. (See List 2 for Training Resources)

– Community policing or patrol officers, law enforcement volunteers, local chambers of commerce, and professional or trade associations can be effective resources for distributing this information to local businesses. 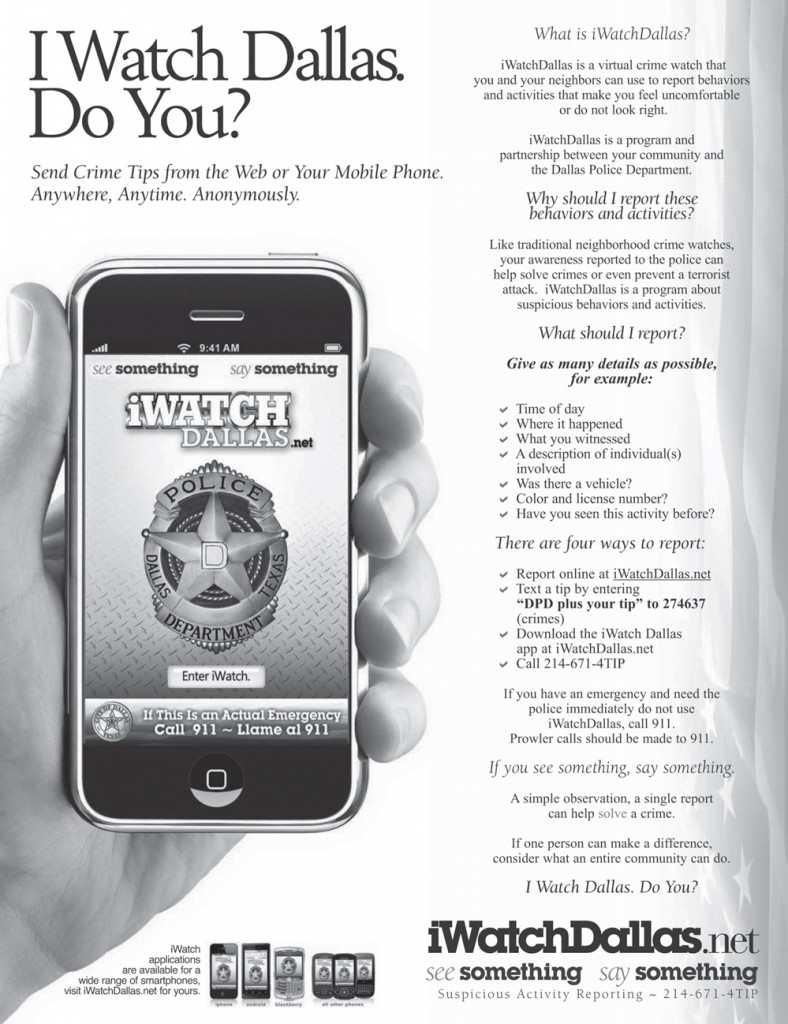