Following Up on Accra: A World Bank Action Plan on Aid Effectiveness 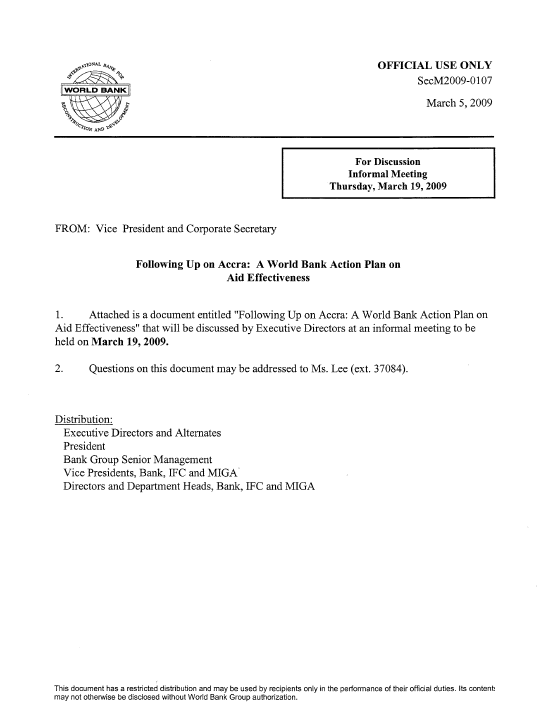 2. Purpose ofthis Paper. Over the last decade, the World Bank has been in the forefront o f the global aid effectiveness movement. With the OECD-DAC , the regional development banks, and the United Nations Development Programme, the Bank was active in convening and shaping the Accra HLF, and it played a prominent role in drafting and negotiating the AAA. It takes seriously i t s responsibility to fulfill the commitments it made in endorsing the AAA. The AAA i s an inclusive document, one that addresses concerns o f the diverse participants at the HLF. This paper provides a broad overview o f the evolving aid effectiveness agenda, highlighting areas critical to increasing the Bank’s development effectiveness. Responding to the request o f the Development Committee and the IDA Deputies, it also sets out an Action Plan to deepen the Bank’s progress over the next 12-18 months.

II. THE AAA IN CONTEXT

3 . Recent years have seen major growth in official development assistance-it nearly doubled between 2000 and 2007 (from $53 to $103 billion)’ and i s being provided by a growing number o f donors using a diversity o f channels and instruments. The international community has recognized that this aid fragmentation contributes to high transaction costs, weakens the accountability and ownership o f all development partners, and strains institutional capacity in developing countries. The aid effectiveness agenda has been the response to reform aid delivery and management systems and processes, which i s needed now more than ever with the onset o f the global financial and economic crisis.

4. The first HLF in Rome, in 2003, drew the development community’s attention to the issues o f harmonization and engaged high-level commitment to addressing them. The second HLF in Paris, in 2005, broadened the agenda to aid effectiveness and took a major step forward as both developing countries and donors3 endorsed the Paris Declaration on Aid Effectiveness, committing to specific actions-some with targets and indicators-and agreeing to monitor implementation o f those commitments. The third HLF in Accra marked a further step forward, with developing countries demonstrating significantly greater ownership o f the aid effectiveness agenda. Developing countries’ concerns heavily influenced the HLF agenda; developing countries’ representatives were part o f all decisions relating to the HLF, and served as discussion chairs and event speakers; and developing countries were full partners in the negotiations leading to the AAA. In other ways, too, the third HLF reflected changes: it involved a much wider range o f development actors (global funds, non-DAC donors, parliamentarians, civil society organizations) and drew attention to issues that have assumed increasing prominence, such as governance.

6. Focus ofthe AAA. The AAA builds on progress achieved to date on the aid effectiveness agenda and, reflecting the voice o f developing countries, i t goes beyond harmonization to focus more on strengthened country ownership and inclusive partnership. I t underscores mutual accountability4 for results and increased transparency by all partners. I t facilitates implementation of, and accelerates progress in, the aid effectiveness agenda by specifying concrete actions in many areas.

0 Stronger country ownership: The AAA emphasizes that broad national ownership o f development strategies, as articulated by developing countries, i s central to aid effectiveness. It supports ownership through greater reliance on country systems and capacity development for governments, as well as for civil society organizations and parliaments. These principles have been
translated into specific commitments such as: Use country systems as the first option; if not using country systems, transparently state the rationale for this and make clear under what circumstances they could be used. It also highlights the paramount need to support capacity development to enable countries to lead and manage development, and it acknowledges the critical role o f parliaments, civil society, and local government bodies in the development process. 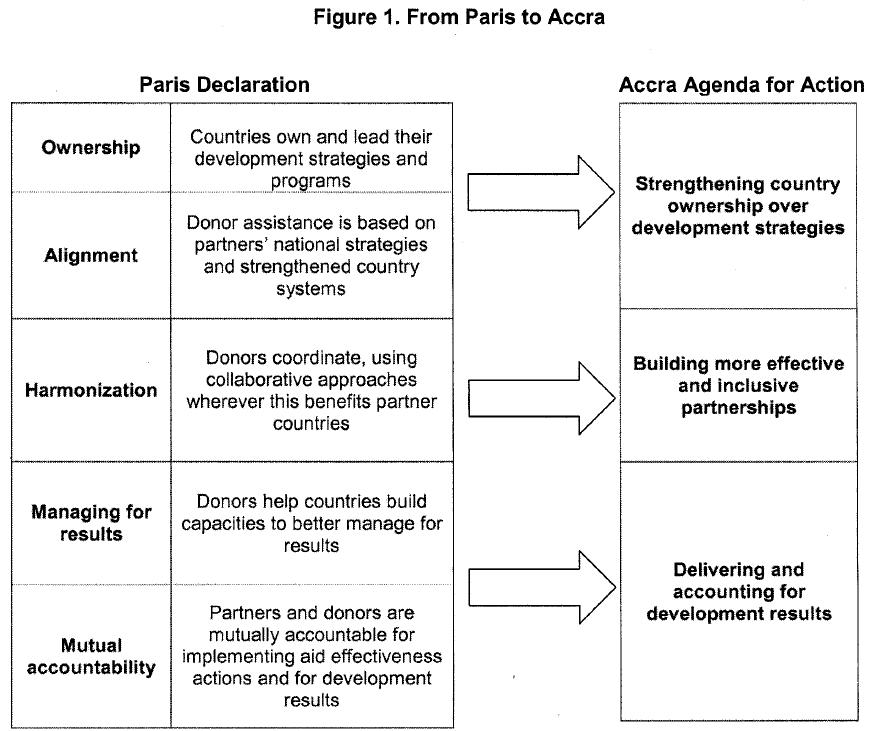