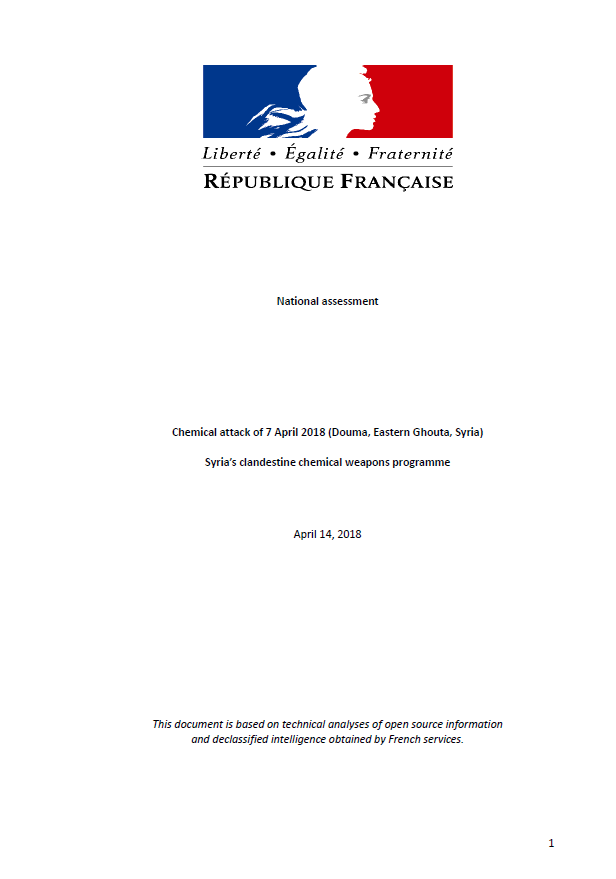 Following the Syrian regime’s resumption of its military offensive, as well as high levels of air force activity over the town of Douma in Eastern Ghouta, two new cases of toxic agents employment were spontaneously reported by civil society and local and international media from the late afternoon of 7 April. Non-governmental medical organizations active in Ghouta (the Syrian American Medical Society and the Union of Medical Care and Relief Organizations), whose information is generally reliable, publicly stated that strikes had targeted in particular local medical infrastructure on 6 and 7 April.

A massive influx of patients in health centres in Eastern Ghouta (at the very least 100 people) presenting symptoms consistent with exposure to a chemical agent was observed and documented during the early evening. In total, several dozens of people, more than forty according to several sources, are thought to have died from exposure to a chemical substance.

The information collected by France forms a body of evidence that is sufficient to attribute responsibility for the chemical attacks of 7 April to the Syrian regime.

French experts analysed the symptoms identifiable in the images and videos that were made public. These images and videos were taken either in enclosed areas in a building where around 15 people died, or in local hospitals that received contaminated patients. These symptoms can be described as follows (cf. annexed images):

No deaths from mechanical injuries were visible. All of these symptoms are characteristic of a chemical weapons attack, particularly choking agents and organophosphorus agents or hydrocyanic acid. Furthermore, the apparent use of bronchodilators by the medical services observed in videos reinforces the hypothesis of intoxication by choking agents.

On the basis of this overall assessment and on the intelligence collected by our services, and in the absence to date of chemical samples analysed by our own laboratories, France therefore considers (i) that, beyond possible doubt, a chemical attack was carried out against civilians at Douma on 7 April 2018; and (ii) that there is no plausible scenario other than that of an attack by Syrian armed forces as part of a wider offensive in the Eastern Ghouta enclave. The Syrian armed and security forces are also considered to be responsible for other actions in the region as part of this same offensive in 2017 and 2018. Russia has undeniably provided active military support to the operations to seize back Ghouta. It has, moreover, provided constant political cover to the Syrian regime over the employment of chemical weapons, both at the UN Security Council and at the OPCW, despite conclusions to the contrary by the JIM.