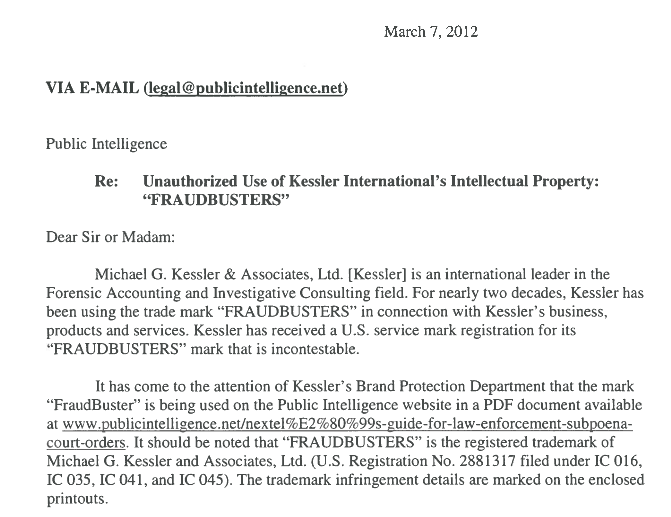 A brief excerpt from the threat issued by Kessler International.

A well-known company specializing in forensic accounting and fraud investigations has threatened to sue Public Intelligence for infringing on a trademark that the company does not even own. Kessler International, a company founded by former Deputy Inspector General of the New York Metropolitan Transit Authority Michael G. Kessler, issued the threat on March 7, 2012 demanding that this website remove a Sprint/Nextel law enforcement guide for subpoenaing subscriber information because it happens to mention the word “Fraudbuster” on approximately three pages. The threat states that the publication of the document constitutes trademark infringement because “FRAUDBUSTERS” is the registered trademark of Kessler International. The threat also demands that we sign an agreement to never again infringe on their trademark and pay them any profits that we have earned from our unauthorized use of their trademark.

Though we are used to receiving unfounded and abusive takedown notices, this is the most egregious threat we have ever received for a number of reasons:

1. The company in question (Michael G. Kessler and Associates, Ltd./Kessler International) does not own the trademark “FRAUDBUSTER” and the word “Fraudbusters” never occurs in the document referenced in the threat.

2. Even if the document did contain the word “FRAUDBUSTERS” which is Kessler’s registered trademark, it would not constitute trademark infringement as the mark is not used in a deceptive manner in association with commerce which is likely to cause confusion among customers as defined in 15 USC § 1114: “use in commerce any reproduction, counterfeit, copy, or colorable imitation of a registered mark in connection with the sale, offering for sale, distribution, or advertising of any goods or services on or in connection with which such use is likely to cause confusion, or to cause mistake, or to deceive.” The idea that a document of journalistic significance and substantial public interest could be unpublishable simply because it happens to reference a product or service on three pages is offensive and should concern all people who value access to information.

3. The threat attempts to force its recipient into a binding contract with the company and attempts to extort funds under false pretenses. Several groups over the past several years, such as the so-called US Copyright Group, have been sued for extortion in the knowing misstatement of false or misleading information in an attempt to induce unlawful payment and maximize payment totals. Under 18 USC § 1951, extortion is defined as: “obtaining of property from another, with his consent, induced by wrongful use of actual or threatened force, violence, or fear, or under color of official right.” The fact that a company that is asserting knowledge and authority regarding trademark law is also asserting their ownership of a trademark that they do not own may indicate a willful attempt to illegally extract funds.

Our response is as follows: