The following is the executive summary of the official report issued by the Nuclear Accident Independent Investigation Commission (NAIIC) earlier this month. 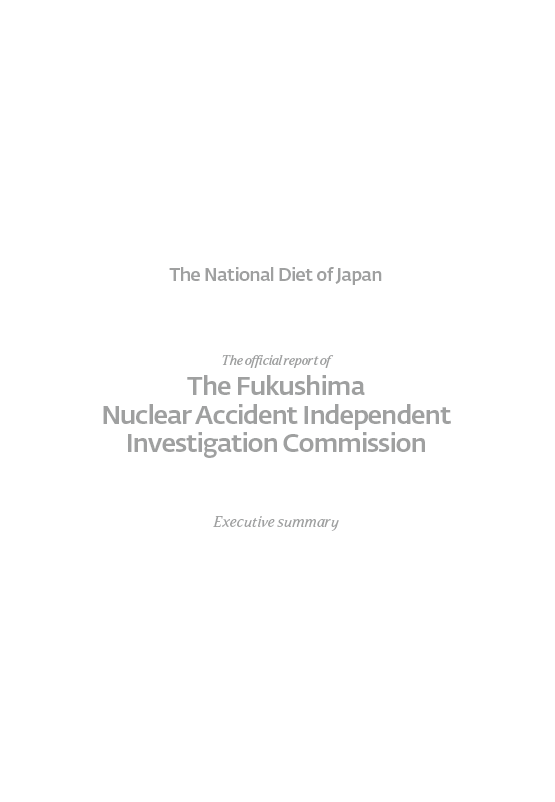 The TEPCO Fukushima Nuclear Power Plant accident was the result of collusion between the government, the regulators and TEPCO, and the lack of governance by said parties. They effectively betrayed the nation’s right to be safe from nuclear accidents. Therefore, we conclude that the accident was clearly “manmade.” We believe that the root causes were the organizational and regulatory systems that supported faulty rationales for decisions and actions, rather than issues relating to the competency of any specific individual. (see Recommendation 1)

The direct causes of the accident were all foreseeable prior to March 11, 2011. But the Fukushima Daiichi Nuclear Power Plant was incapable of withstanding the earthquake and tsunami that hit on that day. The operator (TEPCO), the regulatory bodies (NISA and NSC) and the government body promoting the nuclear power industry (METI), all failed to correctly develop the most basic safety requirements—such as assessing the probability of damage, preparing for containing collateral damage from such a disaster, and developing evacuation plans for the public in the case of a serious radiation release.

TEPCO and the Nuclear and Industrial Safety Agency (NISA) were aware of the need for structural reinforcement in order to conform to new guidelines, but rather than demanding their implementation, NISA stated that action should be taken autonomously by the operator. The Commission has discovered that no part of the required reinforcements had been implemented on Units 1 through 3 by the time of the accident. This was the result of tacit consent by NISA for a significant delay by the operators in completing the reinforcement. In addition, although NISA and the operators were aware of the risk of core damage from tsunami, no regulations were created, nor did TEPCO take any protective steps against such an occurrence.

Since 2006, the regulators and TEPCO were aware of the risk that a total outage of electricity at the Fukushima Daiichi plant might occur if a tsunami were to reach the level of the site. They were also aware of the risk of reactor core damage from the loss of seawater pumps in the case of a tsunami larger than assumed in the Japan Society of Civil Engineers estimation. NISA knew that TEPCO had not prepared any measures to lessen or eliminate the risk, but failed to provide specific instructions to remedy the situation.

The regulators also had a negative attitude toward the importation of new advances in knowledge and technology from overseas. If NISA had passed on to TEPCO measures that were included in the B.5.b subsection of the U.S. security order that followed the 9/11 terrorist action, and if TEPCO had put the measures in place, the accident may have been preventable.

There were many opportunities for taking preventive measures prior to March 11. The accident occurred because TEPCO did not take these measures, and NISA and the Nuclear Safety Commission (NSC) went along. They either intentionally postponed putting safety measures in place, or made decisions based on their organization’s self interest, and not in the interest of public safety.

From TEPCO’s perspective, new regulations would have interfered with plant operations and weakened their stance in potential lawsuits. That was enough motivation for TEPCO to aggressively oppose new safety regulations and draw out negotiations with regulators via the Federation of Electric Power Companies (FEPC). The regulators should have taken a strong position on behalf of the public, but failed to do so. As they had firmly committed themselves to the idea that nuclear power plants were safe, they were reluctant to actively create new regulations. Further exacerbating the problem was the fact that NISA was created as part of the Ministry of Economy, Trade & Industry (METI), an organization that has been actively promoting nuclear power.