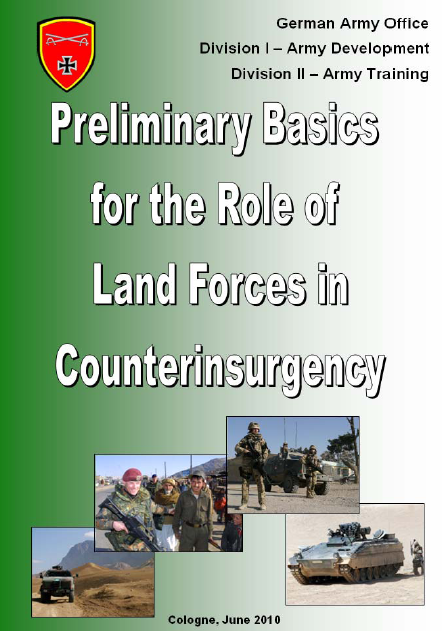 Preliminary Basics for the Role of Land Forces in Counterinsurgency

The term “counterinsurgency” (COIN) is an emotive subject in Germany. It is generally accepted within military circles that COIN is an interagency, long-term strategy to stabilise a crises region. In this context fighting against insurgents is just a small part of the holistic approach of COIN. Being aware that COIN can not be achieved successfully by military means alone, it is a fundamental requirement to find a common sense and a common use of terms with all civil actors involved.

However, having acknowledged an Insurgency to be a group or movement or as an irregular activity, conducted by insurgents, most civil actors tend to associate the term counterinsurgency with the combat operations against those groups. As a result they do not see themselves as being involved in this fight. For that, espescially in Germany, the term COIN has been the subject of much controversy.

Germany has resolved this challenge with two steps. First, in national discussions, the term COIN was replaced by the paraphrase “establishing security and state order in crises areas” (Herstellung von Sicherheit und staatlicher Ordnung in Krisengebieten). Secondly, Germany has redefined the term insurgency as the “process of destabilisation caused by political, economic and/or social grievances, which affects both the effectiveness and legitimacy of the governmental system; this process is exacerbated by insurgent activity”. This definition – in contrast to the understanding of insurgency as a group or movement or as an activity – focusses on the real challenge in COIN-missions and leads automatically to a much clearer understanding of COIN. It must be a main aim to enable our civilian co-actors in theatre to accept the COINapporach as a foundation for fruitful cooperation. The present document does not constitute a directive. It is meant to convey information, stimulate reflection on the topic and provide points for discussions. It describes the role of land forces at the tactical level, addresses the divisions of capability development and instruction/training at Army schools and training centres, and follows
international and national basic concepts currently under development.

The document is divided into three parts:

• Part A provides the basic conceptual framework as needed to give a better understanding of the broader context. It specifically describes the overall interagency approach to COIN.
• Part B shifts the focus to the military component of the overall task described previously.
• Part C contains some guiding principles to stimulate discussions as well as a list of abbreviations and important reference documents.

The key messages of the “Preliminary Basics for the Role of the Land Forces in COIN“ are:

• An insurgency can not be countered by military means alone.
• Establishing security and state order is a longterm, interagency and usually multinational strategy (no military operation) in which the government of the country affected by insurgency has the lead while the other nations and international organisations perform a supporting role.
• The military’s contribution to implementing this strategy is, in principle, a cross-service support task for the Bundeswehr.
• The general approach to describing the role of the land forces is through the Triumvirate of CLEAR – HOLD – BUILD. This document specifies the tasks to be performed by the land forces in support of COIN. All these tasks are mentioned in the Army Regulation (HDv) 100/100 – however, this document deliberately assumes a different systematic approach to emphasise the individual tasks particularly relevant to COIN. As a result, it is more in line with the “Allied Joint Doctrine for Counterinsurgency (COIN) – AJP-3.4.4” currently under development, which will be useful for the dialogue with Allies.

The “Preliminary Basics for the Role of Land Forces in COIN” will be adapted once the previously mentioned international and national basic concepts are available. By the same token, Army Office Section I 1 (1), bearing overall responsibility for this document, welcomes any suggestions for improvement. In the fullness of time this document will be superseded by the production of command and control regulations for the Arms and Services.